The vivacious blue lips of giant clams dot shallow bays and reef communities throughout the Indo-Pacific region, adding vibrant patterns to the seafloor. Like many other creatures with elaborate hues—say, the poison dart frog, whose bright colors helps ward off predators—the bright blue lips of the giant clam aren’t just there to impress onlookers. Scientists first thought that these iridescent cells—which give giant clams these gorgeous blue shades—act as a type of natural sunscreen, filtering intense solar radiation that experience in the shallow waters of the tropics, but new research shows these cells may play more than one role.

In a study published late last month in the Journal of the Royal Society Interface, a team of researchers found that these lips play a crucial, symbiotic role in providing energy to these giant mollusks. Iridescent cells, also called iridocytes, direct sunlight into the clam’s tissue, which in turns feeds photosynthetic algae that provide the giant clams with nutrition.

“We discovered a second function of the biophotonic behavior of these cells in which they redirect solar photons deeper and laterally into the clam tissue, providing gentle but uniform illumination to the millions of symbiotic unicellular algae that supply nutrients to their animal host by photosynthesis,” Daniel Morse, study co-author and professor emeritus in UCSB’s Department of Molecular, Cellular and Developmental Biology and director of the campus’s Marine Biotechnology Center, said in a news release. 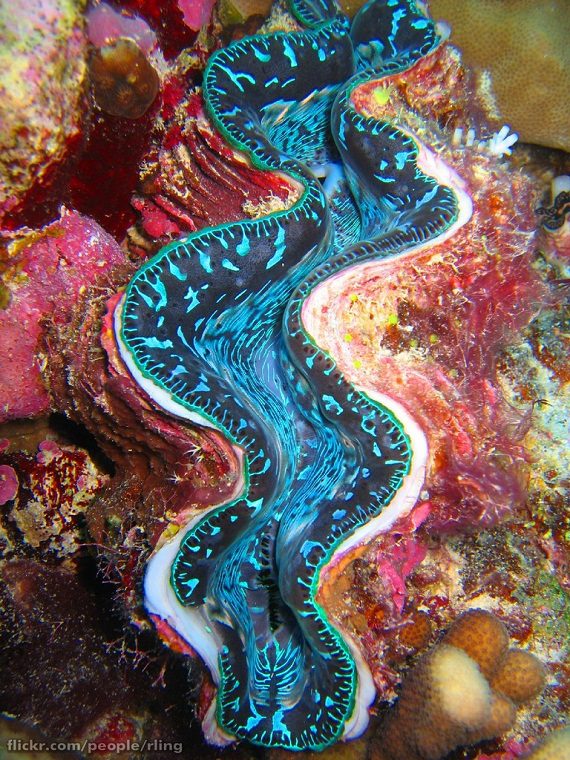 The researchers knew that many other marine organisms have iridescent cells, like cuttlefish and snails, but knew they were used for predator defense or attracting mates—uses not uniform in giant clams. So, the researchers traveled to Palau in the western Pacific Ocean to take a closer look at these mollusks. Using a fiber-optic probe, they measured light inside several giant clam species and found that clam tissue with the iridocyte cells had many more light particles than those without the special cells, according to LiveScience.

Apart from benefiting giant clams, this light-reflecting process could serve as example for advancing solar technology and solar production of algal biofuels, foods, and chemicals, say the researchers. For example, the clam’s reflective tissue structure has implications for developing solar cells to stay cool even under intense heat. And giant clams aren’t the only marine animals that are providing advances to industry; some say that the cuttlefish’s sharp camouflaging capabilities can be useful in developing military technology, while other cephalopods have provided advances in industries from electronics to defense.