As the International Commission for the Conservation of Atlantic Tunas (ICCAT) gears up to meet this November to discuss the future of highly migratory species like bluefin tuna, swordfish, and sharks, Oceana in Europe is sounding the alarm on the European Union for not taking measurable action to help recover Mediterranean swordfish. Mediterranean swordfish are highly overfished and have declined steeply by 70 percent from 1980s levels, according to assessments taken this year.

“The European Union is blatantly ignoring its obligation to manage stocks at sustainable levels by 2015, or by 2020 at the very latest. By not adopting measures now, the EU would be duplicating the same costly mistake that brought bluefin tuna to the verge of collapse in the past,” Oceana Europe fisheries campaign manager Maria Jose Cornax said in a press release.

While the EU has been an advocate for expressing caution towards bluefin tuna catches in recent years, it’s failed to take a step forward on taking basic steps to protect Mediterranean swordfish. The few management measures in place are inadequate at allowing the stock to recover, particularly given that junvenile swordfish compose 75 percent of catches and therefore won’t be able to reproduce.

“The stock remains mismanaged despite a decade of overfishing. Italy, as the nation that both dominates the fishery and holds the Presidency of the EU, has a particular obligation to lead the recovery of such an important species,” Oceana in Europe marine scientist Dr. Ilaria Vielmini said.

Oceana’s recommendations to protect Mediterranean swordfish come at the heels of Oceana releasing a video last month on how the decline of swordfish affect local fishermen. Take a look below to learn more.

Last week, Oceana in Europe released a new video that sheds light on the perils small-scale fishermen in the Mediterranean face today as swordfish decline. The video, “Feluche: Artisanal Fishermen as Watchmen for the Mediterranean Swordfish,” includes interviews with traditional harpoon fishermen—those considered to be first affected by declines in swordfish as the “watchmen of the sea”—about their perception on trends in Mediterranean swordfish catches. This week, scientists of the International Commission for the Conservation of Atlantic Tunas (ICCAT) have convened in Madrid, Spain to recommend measures for this overfished species. 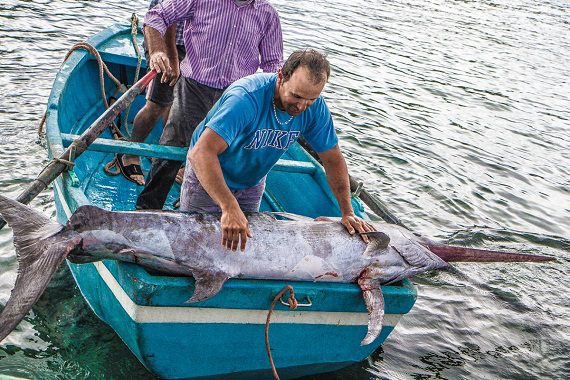 Fishermen onboard an auxiliary boat with a swordfish (Xiphias gladius) caught by a feluca, a typical vessel for artisanal fishing swordfish with harpoon. (Photo: Oceana in Europe / Alessandro Donelli)

“Harpoon fishermen in the Strait of Messina are the sentinels of the status of this species. As swordfish becomes scarcer and smaller, fishermen fear that their livelihood is slipping away, destined to become only a memory,” Oceana in Europe marine scientist Dr. Ilaria Vielmini said in a press release.

Oversized fleets of more than 12,000 vessels—half of which carry European Union flags—capture Mediterranean swordfish without limit or control, though each vessel only catches a few dozen fish per year, according to catch reports. Mediterranean countries have historically failed to manage this species or recover it to sustainable levels, which is taking a toll on small-scale fisheries that depend on this resource. 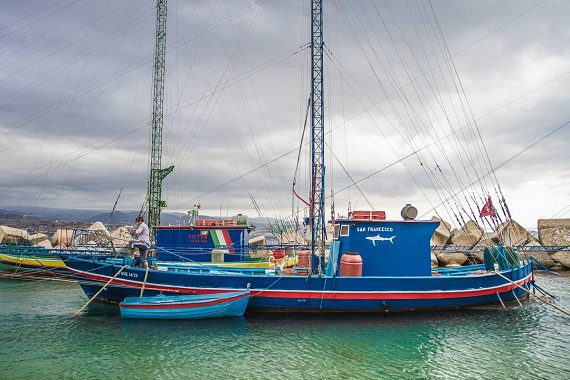 A feluca, a typical vessel for artisanal fishing swordfish with a harpoon. (Photo: Oceana in Europe / Alessandro Donelli)

”Historically, ICCAT Contracting Parties, including the European Union, have refused to look at the real situation of this important stock, which stands in stark contrast to swordfish in the Atlantic Ocean where a recovery plan was put in place,” Oceana in Europe fisheries campaign manager Maria Jose Cornax said in the release. “A species doesn’t need to reach the brink of collapse for management to begin.”

In November, ICCAT Contracting Parties will meet in Genoa, Italy to decide on management of highly migratory species, including Atlantic Bluefin tuna, swordfish, and sharks. Oceana will attend to promote the sustainable fisheries management for swordfish.

Take a look below to learn more about the overexploitation of Mediterranean swordfish through interviews with local fishermen:

Feluche. Artisanal fishermen as watchmen for the Mediterranean swordfish from Oceana on Vimeo.