Photos: What Kind of Shrimp Is Actually on Your Dinner Plate?

Who doesn’t love shrimp? Delicious on salads, sandwiches, and as a main dish, it’s no wonder that it’s the most commonly consumed seafood in the U.S., and the most traded seafood in the world. But, did you know that when you order a shrimp cocktail or shrimp scampi, your “shrimp” could actually be one of dozens of different species of shrimp, as well as domestic or imported, and wild caught or farmed? Most consumers don’t realize that “shrimp” is a highly ambiguous term that refers to different shrimp species of many possible different origins.

Last week, Oceana released a groundbreaking study on shrimp misrepresentation in the United States, and found 30 percent of 143 different shrimp samples to be misrepresented—either mislabeling shrimp for another species or inaccurately labeling shrimp as being wild-caught when it is farmed, for example. Because certain shrimp fisheries and farming can carry a range of associated human rights and environmental issues, misrepresentation deceives U.S. consumers who are already given so little information about the shrimp they eat.

To help define the term “shrimp” and help consumers understand what questions to ask about their shrimp, we’re spotlighting some of the many species that you could be consuming. So, the next time you are ordering that shrimp cocktail, you will be able to ask the right questions about the food you’re paying for and consuming. 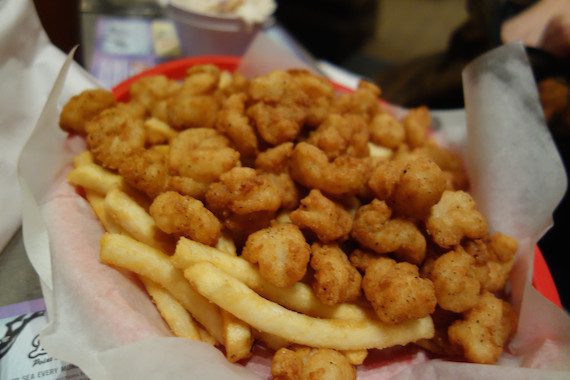 Take a look below to learn more about the various kinds of shrimp that may make it to your dinner plate.

Whiteleg shrimp is the most commonly farmed shrimp species in the world and typically enters the U.S. market from India and Thailand plus other countries in Latin America or Asia. It, however, was the one most frequently substituted, sold either as “wild shrimp” or “Gulf shrimp.” In this Oceana study, dishes we tested labeled as Gulf shrimp cocktail, Bronzed Carolina shrimp, or popcorn shrimp were all whiteleg shrimp.

In New York City, half of mislabeled shrimp was farmed whiteleg; in the Gulf, shrimp that was not actual wild-caught gulf shrimp was this species, and in Portland and D.C., this shrimp was substituted in for other shrimp said to come from the Pacific, the Carolinas, and the Gulf. 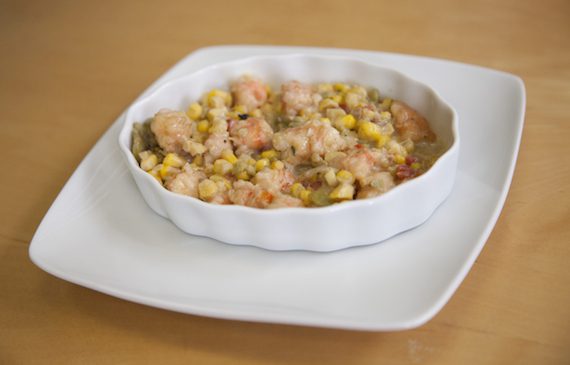 This colorful shrimp lives in coral reefs where it sets up shop to clean parasites and fungi off fish, earning its title as a “cleaner” shrimp. This mutualistic relationship benefits both the shrimp and the fish. This shrimp is also sold as an aquarium pet—meaning it’s a shrimp species not meant to reach your dinner plate. In the testing, however, Oceana found it mixed in with other unidentifiable shrimp in a bag of frozen Vietnamese wild salad-sized shrimp.

When you are eating “Gulf shrimp,” there’s a good chance you are eating brown, white, or pink shrimp. These species are caught in the Gulf of Mexico and Southeast Atlantic waters. White shrimp constituted nearly a quarter of the shrimp species identified, while brown shrimp made up 18 percent.

Royal red shrimp is considered to be a more expensive and luxurious shrimp species that’s prized for its lobster-like flavor and bright red color. Royal red shrimp are true Gulf of Mexico shrimp, but royal red dishes purchased for this study were found to be mislabeled for other species, including one not on the FDA seafood list and one from Argentina. Instead, real royal red shrimp was found in New York City and Washington, D.C. Similarly, rock shrimp is another Gulf shrimp species that wasn’t actually found honestly labeled in the Gulf region during our testing.

Farmed giant tiger prawn, another farmed species, was found mislabeled as both “wild” and as “wild Hawaiian blue shrimp” in the samples in our study, with both instances occurring in Washington, D.C. and New York City. Portland had several samples of giant tiger prawn labeled correctly.

Blue shrimp, which is from Mexico, was mislabeled as “Gulf pink” in the study. Blue shrimp are native in the eastern Pacific from Peru to Mexico, but are largely overfished. This fishery catches a high amount of bycatch, so Seafood Watch lists them as a species to avoid.

Ocean shrimp are native to cooler Pacific waters from northern California to Washington, and are also known as “Oregon pink” or “bay shrimp” in the area. Fortunately, local ocean shrimp comprised most of the samples taken in the Portland area, followed by farmed whiteleg and giant tiger prawn. Though it was the first shrimp fishery in the world to be certified by the Marine Stewardship Council, the fishery does haul in heavy amounts of bycatch.

President Obama’s recently designated Task Force on Combatting Illegal, Unreported, and Unregulated (IUU) Fishing and Seafood Fraud is developing solutions to tackle these problems now. Please join us in calling for seafood traceability to track shrimp from boat or farm to plate, allowing consumers to have more information about their shrimp. Click here to sign Oceana’s petition to call on President Obama’s IUU and seafood fraud task force to recommend traceability for all seafood sold in the U.S. to ensure that it is safe, legally caught, and honestly labeled. Click here to learn more about Oceana’s campaign to Stop Seafood Fraud, and visit www.oceana.org/shrimpfraud to access more materials related to the new shrimp report.