Last week, Oceana released a new report that uncovered widespread misrepresentation of America’s favorite seafood: shrimp. The report found 30 percent of DNA-tested shrimp samples to be misrepresented—often mislabeled for another species or said to be wild caught when it was farmed—across more than 100 restaurants and grocery stores nationwide. Some of the report’s wildest findings were uncovering an aquarium pet shrimp—banded coral shrimp in a bag of frozen wild salad shrimp—as well as uncovering many shrimp species not known to be sold in the U.S.

But, the results are only half the fun. Members of Oceana’s seafood fraud team—senior scientist Dr. Kimberly Warner and former science fellow Rachel Golden—road tripped around the Gulf of Mexico region to collect these samples, and had a great time along the way. Below, Rachel Golden shares the second and final installment of a two-part blog series about the life of a seafood sleuth. Stay tuned to learn more about this adventure!

Day 4: Diaries of a Seafood Sleuth

As seafood consumers, are we always eating what we thought we ordered? While in the Gulf of Mexico, we take the opportunity to survey products sold at grocery stores and restaurants and note misleading and blatantly incorrect labels along the way.

What labels are required to be printed on seafood we buy? It depends on where it’s sold. If the seafood is sold in a large grocery store, it must be labeled with the country of origin, the method of production (wild or farmed), and various other standard information (package size, shrimp count per pound, etc.). But, there are some exceptions. If seafood is “processed,” meaning that it has undergone some modification (breaded, prepared with pasta, etc.), then the fish need not be labeled with country of origin or method of production. 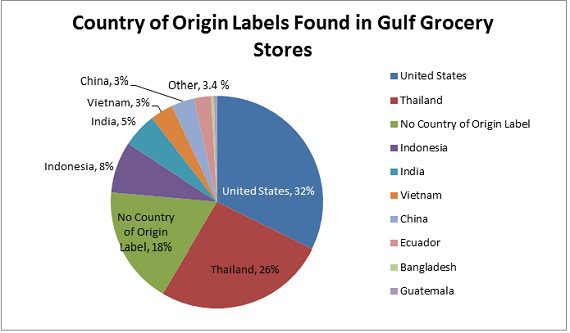 This loophole is immediately obvious to us as we inspect labels. Nearly all “processed” products lack information on where the shrimp came from and how it was grown or caught. Surprisingly, we find that 18 percent of the shrimp we survey in Gulf of Mexico grocery stores has no country of origin label at all.

What about restaurants and other retailers? Remember—grocery store seafood products must be labeled with some specific information. This rule, however, does NOT apply to restaurants or other small retailers which sell seafood. Some restaurants confusingly choose to advertise “Gulf” shrimp for some dishes and not others. This doesn’t always mean that the “Gulf” shrimp is wild caught.  In fact, we purchased two dishes from one restaurant—one labeled “Gulf” and one unspecified. The result? Both were farmed Pacific white-leg shrimp. 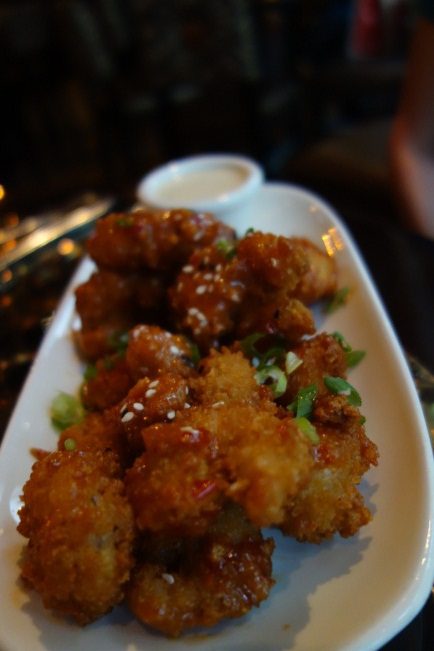 Restaurants are not required to display the country of origin label on seafood. (Photo: Rachel Golden)

Beyond a lack of labels, other product labels are simply misleading. We are shocked to see this label (below), which boasts a “Gulf” origin, but hints that it is “farm-raised” and “Product of Thailand” in small print. What type of shrimp could this possibly be and where did it come from? The fishmonger insists that it is “from the Gulf,” but we purchase a sample to be sure. 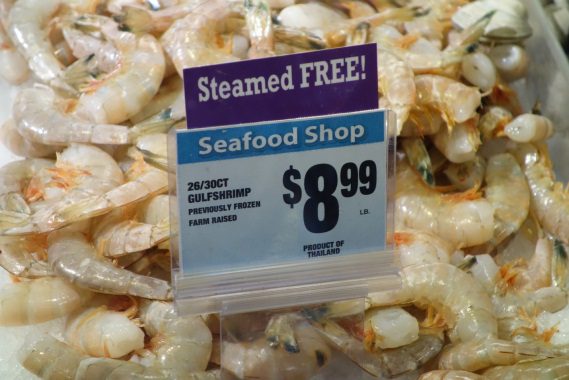 Update with result: Our misleading shrimp label is in fact farmed whiteleg shrimp, Litopennaeus vannamei. Based on our DNA test alone, we cannot discern the true origin of the shrimp—is it from the Gulf of Mexico, Gulf of Thailand, or somewhere else? This is a perfect example of labeling that misleads the consumer attempting to support the local economy or make informed decisions about the health and sustainability of their seafood.

Day 5: Diaries of a Seafood Sleuth 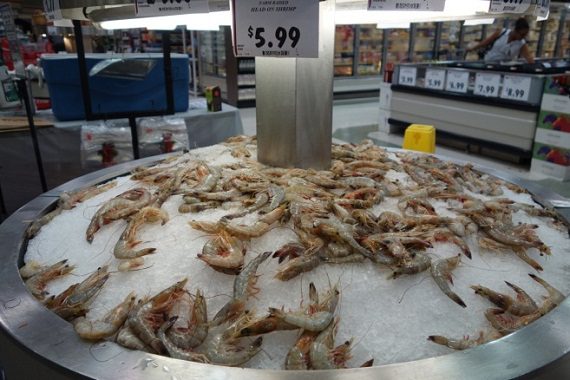 It’s our last day of seafood sleuthing in the Gulf of Mexico, so let’s recap what we have accomplished. We’ve set out on a mission to investigate seafood fraud and mislabeling in a variety of cities. We’ve collected dozens of shrimp samples in restaurants and grocery stores, as well as details about information printed on shrimp labels. Mission accomplished!

What are the next steps? First, we will send our shrimp samples to a laboratory for DNA analysis. This test will identify the genus and species of each sample and discern whether or not it was mislabeled. We will also be able to determine the types of species served under the name “Gulf shrimp” as well as species sold as generic “shrimp.” DNA analysis, however, will not always allow us to specifically identify the geographic region where the shrimp was caught or farmed.

As we eagerly await the results, we examine some of our other data including grocery store and menu surveys. We explore different aspects of the data and ask a variety of questions, like what country of origin labels are printed on shrimp products? What level of detail is provided to the consumer on different products? Where is “Gulf shrimp” sold and how is it marketed?

What should you know about the outcome of this trip? We’ve learned that the Gulf of Mexico is an excellent place to learn about shrimp! The pride in Gulf shrimp and seafood in general pervades nearly every food establishment we enter. And a bonus: Gulf seafood is delicious!

Unfortunately some grocery stores and restaurants tend to display misleading labels on their shrimp products. What does “Gulf shrimp” actually mean? It could be farmed or wild-caught and could be one of several different species.

What is the solution to all of this misinformation? Traceability, the availability of information about seafood’s “tale,” including where it was caught, how it was caught, and the species name clarifies these misleading labels. It also allows for better law enforcement prohibiting the sale of illegally caught seafood.

President Obama’s recently designated Task Force on Combatting Illegal, Unreported, and Unregulated (IUU) Fishing and Seafood Fraud is developing solutions to tackle these problems now. Please join us in calling for seafood traceability to track shrimp from boat or farm to plate, allowing consumers to have more information about their shrimp. Click here to sign Oceana’s petition to call on President Obama’s IUU and seafood fraud task force to recommend traceability for all seafood sold in the U.S.