Seabirds are the all-terrain vehicles of the avian world: they fly, they float, they swim and they dive. But some seabirds also come standard with more exotic features like airbags, night vision and a self-defense system that’s both disgusting and potentially deadly. Below, learn about four incredible adaptations that will give you a fresh appreciation for these marine multitaskers. 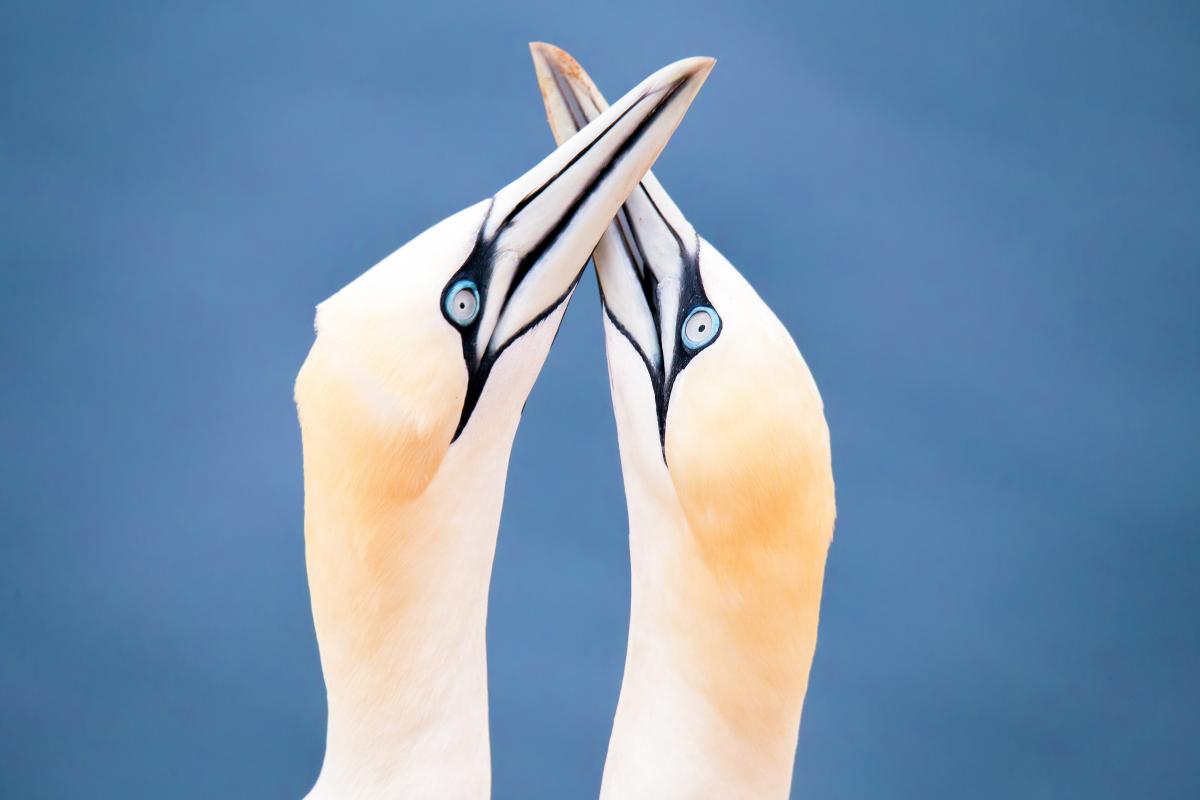 Seabirds have to be light enough to soar for long stretches of time and buoyant enough to float when they rest on the ocean’s surface. Some seabirds are so light and buoyant that they actually have trouble getting under the water at all.

That’s a problem for a bird trying to snag fish or squid for its next meal. Luckily, there’s a solution: gravity. These feathery lightweights have evolved to be some of nature’s most magnificent divers, plunging from Olympian heights and letting their momentum carry them dozens of feet below the surface.

Gannets are champions among the “plunge-divers.” The largest species, the Northern gannet (Morus bassanus), can plummet into the ocean from as high as 130 feet (40 meters) in the air, hitting the water at around 55 miles (88 kilometers) per hour. This species uses a combination of speed and wing-beats to dive as deep as 115 feet (35 meters).

Unlike the sudden (and painful) deceleration of a human belly-flopper, the diving posture of a Cape gannet (Morus capensis) is so streamlined that the bird only slows down a little — or not at all — when it plunges into the sea.

For humans and birds alike, hitting the ocean at high speed can mean two nostrils uncomfortably stuffed with saltwater. To get around this issue, gannets breathe through thin slits located where the upper jaw meets the head. These slits are covered by a flap of hard tissue that closes when the bird dives.

A high-diving lifestyle also comes with the additional risks of sore muscles or even a broken neck. So gannets come equipped with “airbags,” extensions of their respiratory system that cushion their bodies when they hit the water. 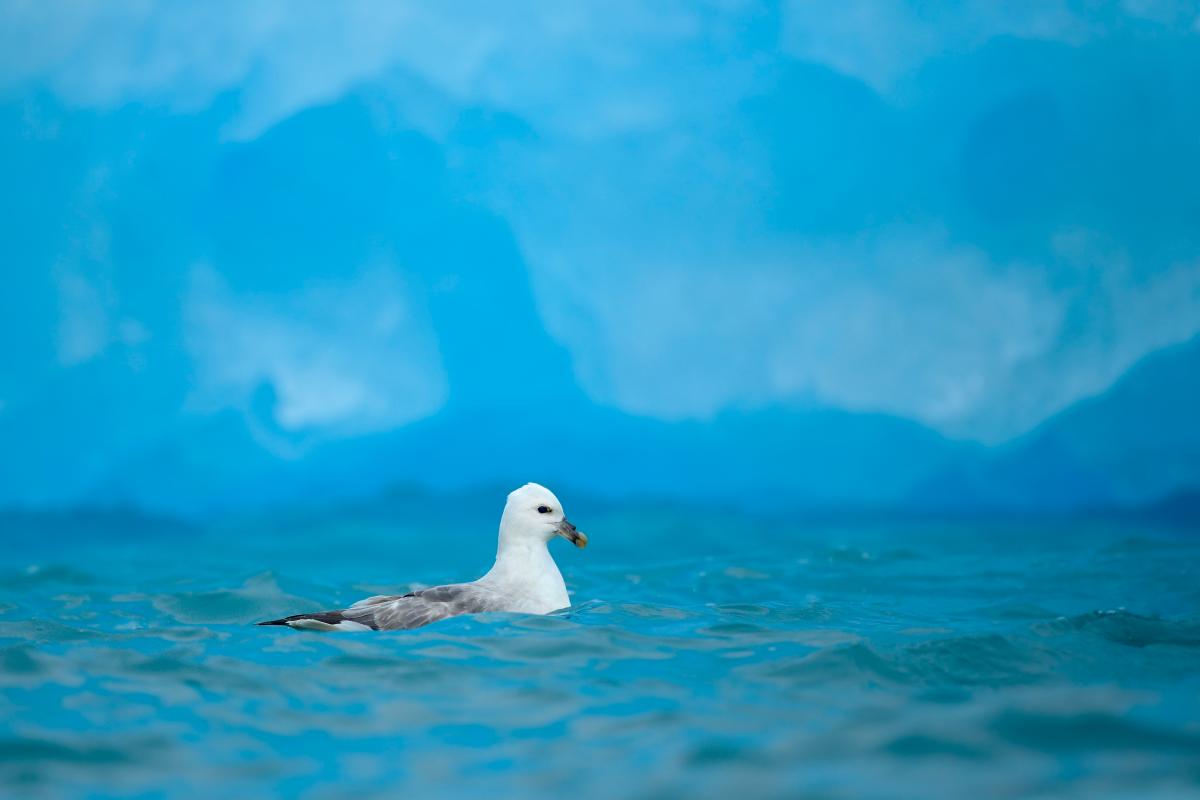 Life is perilous for young seabirds before they fledge. With their parents hunting out at sea, they have little defense against natural predators like owls, eagles and other seabirds, not to mention introduced threats like rats or cats. But fulmar chicks (Fulmarus), and other “tube-nosed” species of seabirds, have evolved a way to make dinner a stomach-turning defense. 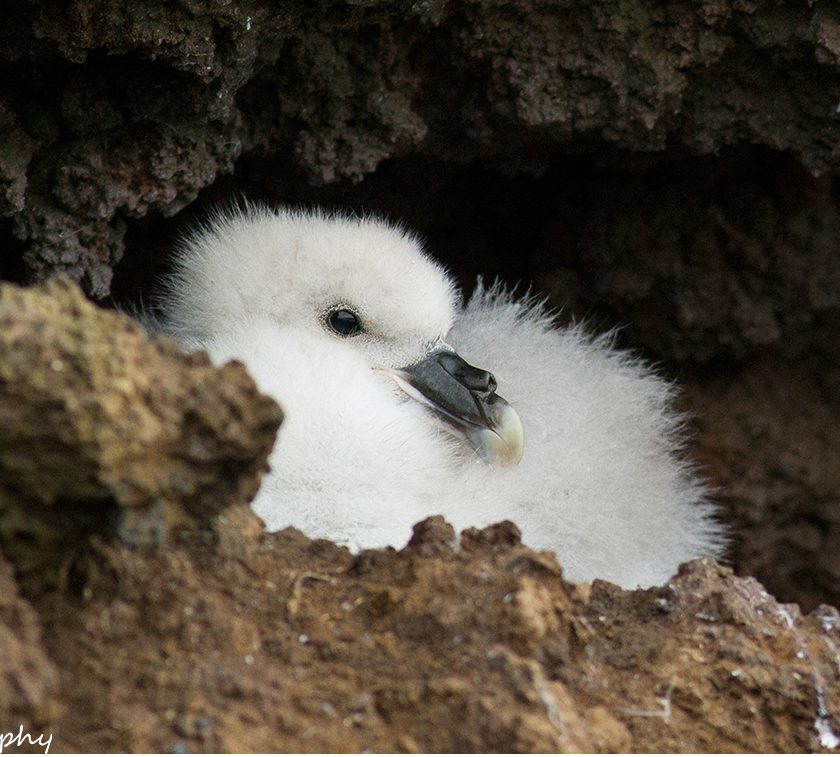 After swallowing a fish, an adult fulmar’s digestive system separates the oil from the protein, and shunts the oil into a storage gland called the proventriculus.

Mom or dad then returns to the nest and regurgitates this reddish-orange, highly nutritious oil for the chick. The parents hedge their bets though and pump their chick full of more oil than it needs to survive.

The extra oil doesn’t go to waste. It serves as insurance against a longer-than-expected absence on the part of the parents, but it also can be used as the chick’s secret weapon. When a threat gets too near — be it a predator or an unlucky scientist — the baby fulmar spits up a jet of warm, stinky oil that cools into a waxy substance.

Feathers and fulmar oil do not mix. A hungry eagle, hawk, heron, owl or crow that gets squirted can lose the warmth and waterproofing of its feathers and may eventually drown or die of hypothermia. 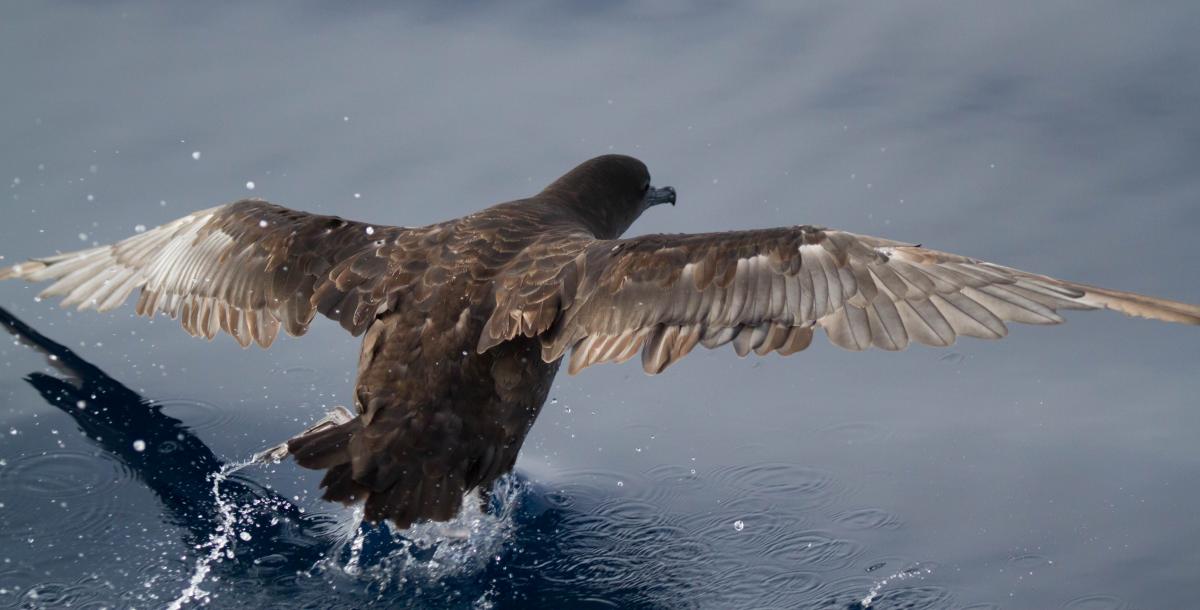 Seabirds are champions at racking up frequent-flyer miles. One 65-year-old Laysan albatross is estimated to have flown over three million miles since she was tagged in 1956. But when it comes to annual migrations, sooty shearwaters (Ardenna griseus) make one of the most extreme journeys of any animal on Earth.

Using electronic tracking technology, scientists found that these small birds travel about 39,000 miles (65,000 kilometers) in a single year. Shearwaters follow a figure-eight route across the Pacific from the Arctic to the Antarctic, showing up at each pole just as their respective summers hit and a buffet of seafood materializes. 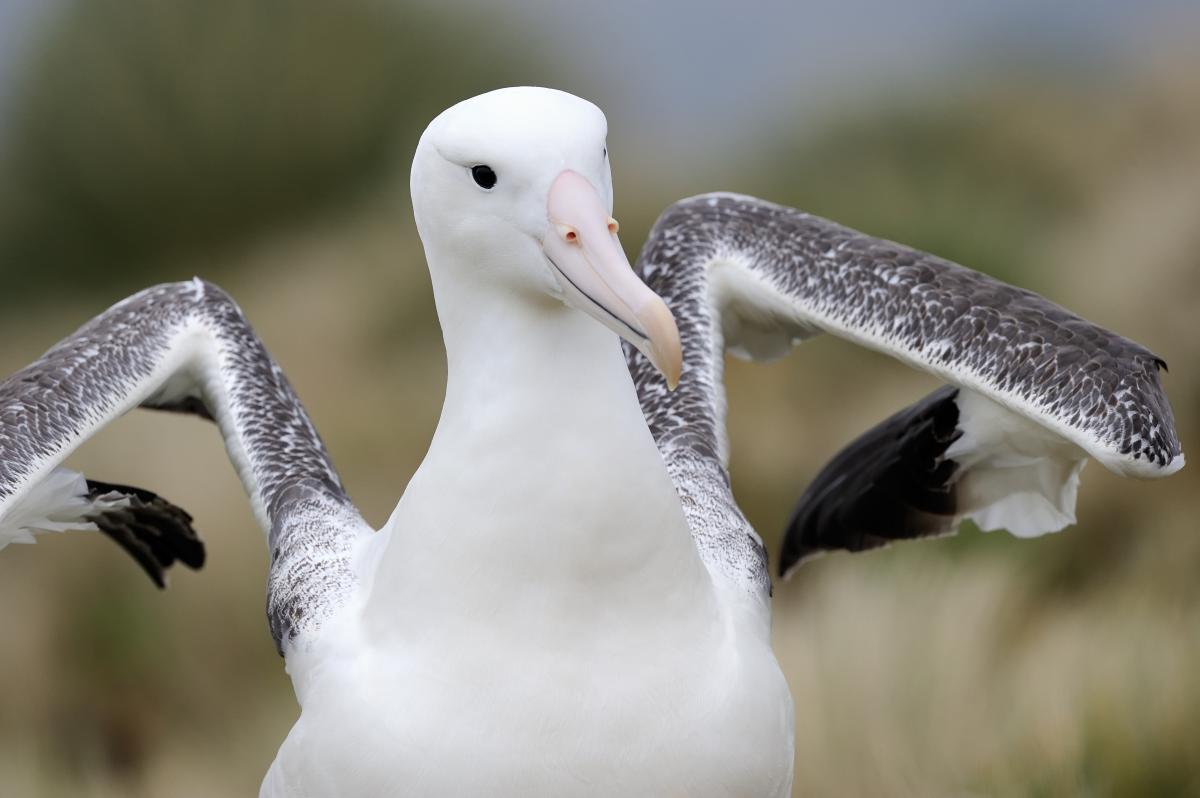 For seabirds, even something as simple as sight presents a challenge. Their vision has to be fine-tuned not only for spotting fish flitting below the shining waves, but also for chasing their dinner underwater in dark or murky conditions. 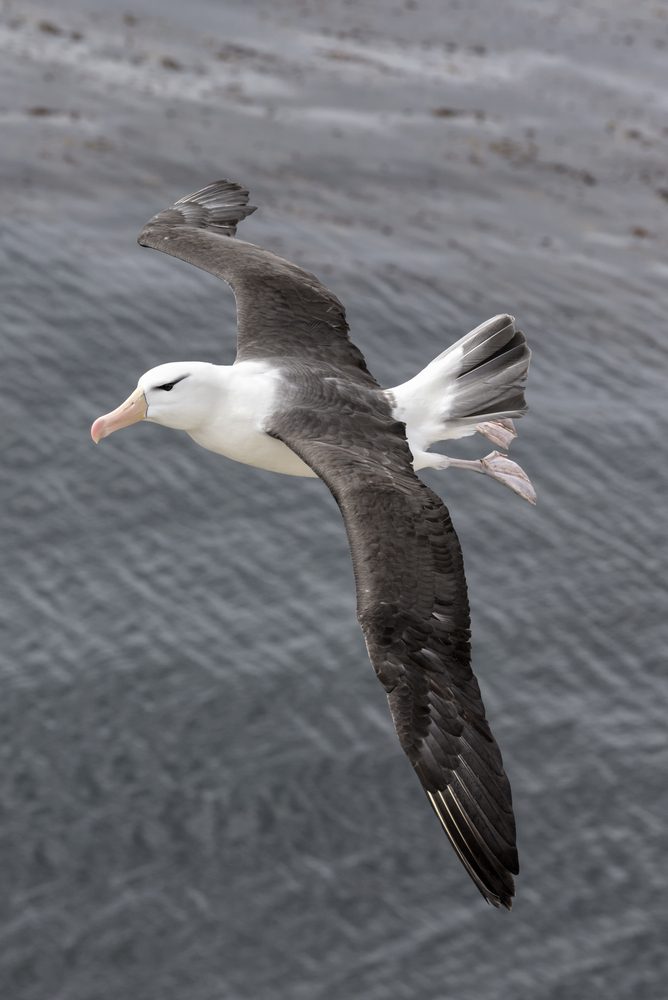 The eye’s ability to focus on objects is affected by whether the surrounding medium is air or water. Human eyes are shaped to see in air; so the only way we can see clearly underwater is by strapping on a pair of goggles that create an air pocket for our eyes. Australasian gannets (Morus serrator) have a more elegant solution: they’re able to change the shape of the lens in their eyes within about a tenth of a second so that they can focus on objects underwater.

And while many birds can see ultraviolet (UV) light — a range of color beyond purple that’s invisible to humans — very few seabirds can. Petrels, gannets and albatrosses all lack this ability. As beachgoers who turn painfully pink by the end of the day know, the sand and sea do a great job of reflecting sunburn-causing UV. If seabirds lost their ability to see in UV, there must be a good reason.

Scientists theorize this loss may have something to do with protection. All birds have tiny droplets of oil in their light-sensing cells that act as microscopic lenses, and in some cases improve color vision. Perhaps the droplets in seabird eyes act as “sunglasses” to screen out dangerous UV light in an environment where there’s plenty of it.

So the next time you’re at the beach, keep an eye out for gannets, shearwaters and other high-divers and long-distance champs. And remember: a cuddly as it may look, never get too close to a fulmar chick.

Oceana works to end the use of irresponsible fishing gear that threatens many seabird populations around the world. Learn more about our campaign to reduce bycatch, or donate to support our work.