Southern royal albatrosses go through several life stages, just as humans do. They spend their youth searching for a suitable partner to settle down with, and once coupled, they raise a handful of chicks together and split their time between New Zealand, where they breed, and the southernmost reaches of South America, where they feed.

These majestic seabirds can live well into their 40s, but too often, their lives are drastically cut short by plastic pollution. A shocking new video from Greenpeace shows a 3- or 4-year-old southern royal albatross that died in New Zealand after swallowing a single-use plastic bottle whole. The juvenile bird was found struggling in the surf close to shore, and though it was rushed to an animal sanctuary, veterinarians couldn’t save it. The bird died a few days later, likely due to starvation caused by the plastic obstruction.

No outward signs of injury were apparent, but a necropsy revealed a balloon and a 500-milliliter plastic bottle lodged in the bird’s stomach. “It’s not a quick death. They don’t just swallow the bottle and then the bird dies,” Stuart Hunter, a veterinary pathologist at Massey University’s Wildbase animal hospital in Palmerston North, New Zealand, where the albatross was taken, told Greenpeace in the video below. “The bird can’t eat properly because it’s got this big plastic bottle in its stomach. It’s causing uncomfortableness, a degree of pain, and so the bird just slowly starves.”

Pauline Nijman, a Wildbase supervisor, told Oceana that cases like these are not uncommon. “We have treated many albatrosses with an array of plastic items in the stomach, including balloons, bouncy balls, a plastic spoon, and indistinguishable shards of plastic,” Nijman said. “It is mortifying to witness and we aren’t able to save them all.”

New Zealand has been dubbed the seabird capital of the world, and research shows it’s one of the places where seabirds are most vulnerable to death by plastic ingestion. The country is home to a large number and variety of seabirds that find their food by skimming the ocean’s surface. When an adult seabird mistakes pieces of plastic for food, it can regurgitate these bite-sized bits and inadvertently feed plastic to its chick. This same scenario plays out around the world, and globally 90% of seabirds are estimated to have eaten plastic.

Southern royal albatrosses – which are among the world’s largest flying birds – are considered a species vulnerable to extinction, according to the International Union for the Conservation of Nature. Dangerous fishing gear, like longlines and trawls, are known to ensnare them. Making matters worse, plastic is an increasingly prominent and lethal threat, with an estimated 17.6 billion pounds of plastic polluting the world’s oceans each year.

Dr. Lauren Roman, a postdoctoral researcher at Australia’s national science organization, CSIRO Oceans and Atmosphere, studies the ways in which marine debris affects wildlife. The full effects of plastic on seabird health are not yet known, but Roman told Oceana “that even a single, small piece can cause fatal gastrointestinal obstructions if they become stuck in the gastrointestinal tract.”

Images of decaying albatrosses with bottle caps and plastic shards amongst their remains are well-documented, but Roman said albatrosses probably also eat larger plastics (like water bottles) more frequently than researchers are aware of. This is because albatrosses might survive if they are able to regurgitate large obstructing objects. On the other hand, if they are unable to empty their bellies, it’s likely that they will die at sea before anyone finds their bodies and learns of their plight.

“This incident in New Zealand would not have been discovered had this albatross not been taken to a wildlife specialist veterinary hospital and had a post-mortem examination not taken place when it died,” Roman said. “Understanding the frequency of these events is important for the conservation of albatrosses (and other species), most of which are already threatened and/or declining.” 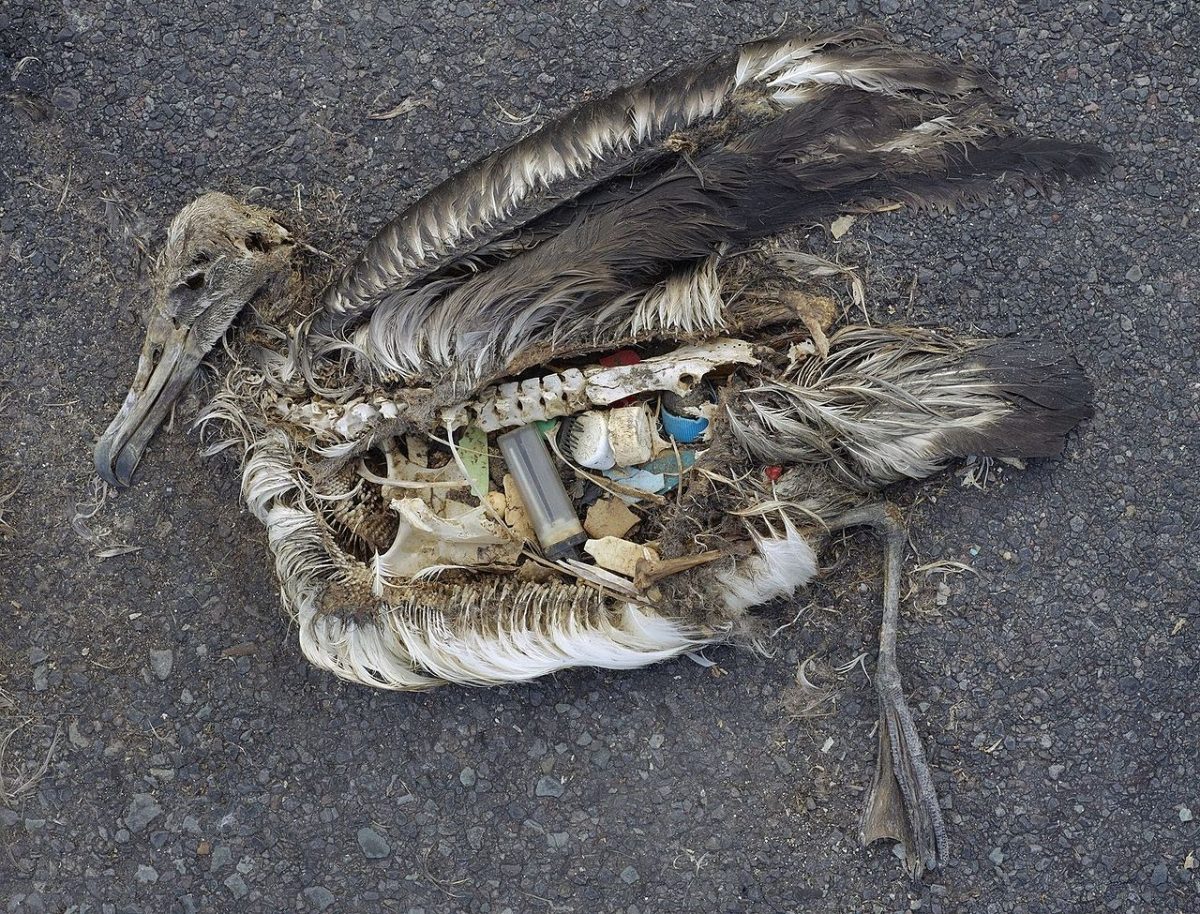 The senseless death of this albatross – much like the deaths of countless other marine animals around the world – could have been prevented. Each year, 21 to 34 billion plastic bottles enter the ocean. Many of these bottles are used just once, perhaps for five minutes or less, but they practically never disappear once they end up in marine environments. As we’ve explained in our “Recycling Myth of the Month” series, recycling initiatives and bioplastics will not save us from the pollution crisis that the plastic industry created and continues to perpetuate.

Instead, we must focus on the “reduce” component of the “reduce, reuse, recycle” recommendation. One simple way that beverage-makers can curb plastic pollution is by packaging their products in refillable bottles that can be reused 20 to 50 times. Customers typically pay a deposit for each bottle, but they get their money back after returning the bottle to the company.

A report from Oceana found that a 10% increase in the share of beverages sold in refillable bottles could result in a 22% decrease in marine plastic pollution. This would keep 4.5 to 7.6 billion plastic bottles out of the ocean each year. These systems are not only eco-friendly, but they’re also effective. In countries where refillables are common, customers return their bottles nearly 100% of the time.