Alexandra Cousteau on protecting the ocean

The oceans need help in a big way in 2016. With horrible threats at every turn, we must find support to combat some of the greatest risks to marine life we’ve seen in our lifetime.

For a unique perspective on this critical moment, I asked Oceana Senior Advisor Alexandra Cousteau to share her thoughts on our organization and the importance of your involvement. Alexandra has joined her family’s legacy of underwater exploration and conservation by advocating for the environment and has seen firsthand the threats we face – and how you can make a difference: 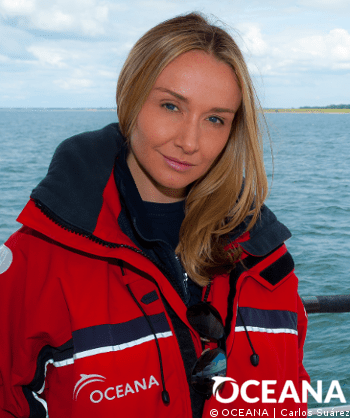 Why did you choose to join Oceana?

The ocean has been a very important part of my life for as long as I can remember. Today, as I watch many of the places I loved as a child succumb to overfishing, mismanagement, pollution and exploitation, I feel compelled to continue my family’s legacy of marine conservation. I feel that the most effective way I can do that is by collaborating with an organization that has strong leadership, a compelling vision for the future, and a track record of success. I believe that Oceana can catalyze the change needed to save our oceans, and I am honored to work with their fantastic team to further this mission.

Oceana is the largest organization working exclusively on ocean conservation. Their campaigns and expeditions create measurable change for the oceans and the communities that rely on them. The scope of their work is expanding quickly as their success attracts increasing support around the world. We need an ambitious vision for how we will save the oceans while there is still time and hope. I believe that Oceana is that organization and that throwing my support behind their programs is the best way for me to help create change.

What’s up next for ocean advocacy?

I was in Belize earlier this month advocating on behalf of Oceana’s campaign to prevent oil drilling along their barrier reef. I was excited to speak with politicians, students, media, fishermen and supporters to help protect some of the most beautiful coral reefs in the world. I will also be continuing to work on multimedia projects advocating for water and ocean conservation through film, articles and podcasts.

Why is it so important to act to protect the oceans right now, and what should we do?

Right now the oceans are in serious danger. Factors like pollution, overfishing and natural phenomenon like El Niño are challenging on their own, but right now they’re happening all at once which is a recipe for disaster. I believe that if we are going to save the oceans, we need an ambitious and visionary approach to conserving the biodiversity and abundance of the oceans. Oceana’s Save the Oceans, Feed the World campaign is just such a solution. The campaign – which aims to increase global fish catch in order to feed billions of people – is strategic, audacious, informed by data and science, and most importantly, achievable. It is already being deployed in countries around the world and has the potential to address a multitude concerns ranging from overfishing to global hunger to climate change resilience to biodiversity loss. It is tremendously exciting to see how much support is coalescing around this strategy for change and to be a part of it!

Why is it important for individuals to get involved?

The ocean touches each and every human being, regardless of our proximity to the seashore. Climate, transportation, food security, energy, recreation and more… all are provided free of charge by an extraordinary resource that is in real danger of collapse. Supporting ocean conservation efforts, especially from an organization that creates measurable change like Oceana, gives us the opportunity to take personal action to protect one of the most critical – and beautiful – parts of our world.

We’re honored to have Alexandra’s passion for the oceans on our side, but she’ll be the first to say the oceans need all of us. As we fight for oceans, which are on the verge of collapse, our innovative, effective campaigns will only be as powerful as the support they receive.

Make a donation now to save the oceans, protect marine wildlife and lead the world into a more sustainable future.

Thanks for everything you do.