Amazon packages are awash in plastic. How much of it is actually recyclable?

If you’ve been clicking “add to cart” more than usual lately, you’re not alone. COVID-19 has caused a surge in e-commerce because it’s a convenient, low-risk way to shop. For some communities it’s the only way to secure select goods, and online shopping doesn’t get much easier than Amazon, the world’s largest online retailer.

A new survey commissioned by Oceana found that 54% of polled Amazon customers in the United States, United Kingdom, and Canada have been doing more online shopping throughout the pandemic. But once those packages have been opened and the thrill of a new purchase subsides, a sobering question settles in: What will happen to all of the plastic left behind?

Plastic bags, bubble-lined mailers, and “air pillows” are just a few forms of plastic packaging that can be found in your average Amazon order. Though it is lightweight, this plastic practically never biodegrades and poses a threat to ocean ecosystems that bear the brunt of plastic pollution. It’s also the type of trash that marine animals – like sea turtles – too often mistake for food.

Oceana believes that Amazon customers should be given a plastic-free option at checkout, and customers agree. Of the Amazon shoppers who responded to Oceana’s survey, 86% are concerned about plastic pollution and 87% think that major online retailers like Amazon should take action to curb the amount of plastic packaging they use.

Recycling is often posited as a “solution” to plastic pollution, but virtually none of Amazon’s plastic packaging is easily recyclable. Read on to learn about the most common types of plastic packaging that Amazon uses, and whether they should go in your trash can or recycling bin. 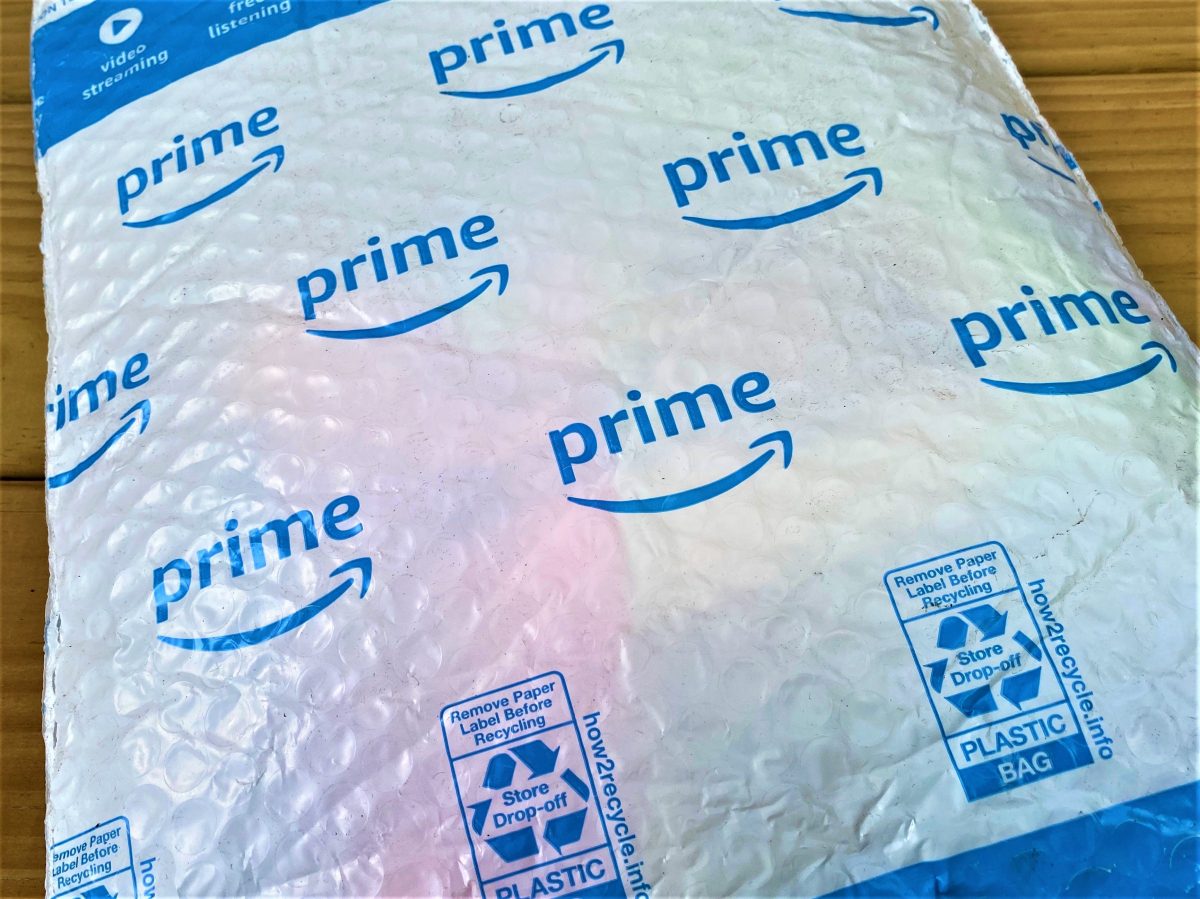 While some exceptions apply, most community recycling programs will not accept “flexible plastics” like Amazon’s ubiquitous bubble-lined bags. This is because these bags can – and do – get entangled in a recycling facility’s machinery, delaying the entire process. If customers want to keep these bags out of landfills and the ocean, the onus is on them to visit the website printed on the package – how2recycle.info – and find a participating store that will accept these materials. This is cumbersome for city dwellers, and near-impossible for people in rural areas where the nearest drop-off location may be dozens of miles away. Residents of Calistoga, California, for example, must drive nearly 21 miles to offload their otherwise unrecyclable plastics. For these reasons, Amazon’s bubble-lined bags can’t be considered recyclable in practice, and all too often they become trash after a single use.­ 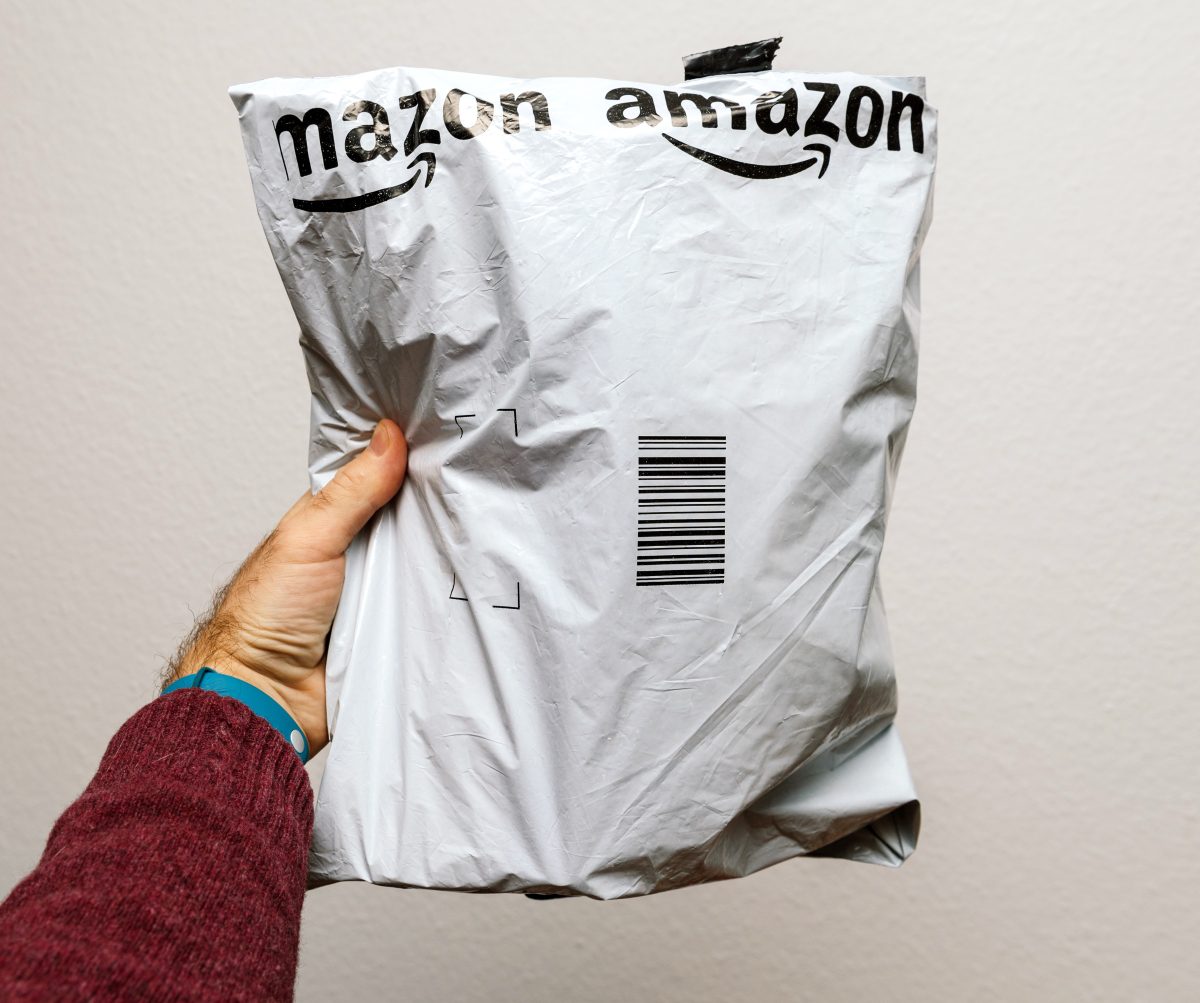 Again, it’s highly uncommon for local recycling programs to accept flexible plastics because they’re difficult to process and there largely isn’t a market for them. These packages don’t need to be made of plastic, though. The scientists and engineers at Amazon’s lab have already created lightweight, plastic-free packaging, including a new mailer that has been used over 100 million times, according to the company. However, Amazon’s regular plastic bags are still widely used. To put things in perspective, Amazon shipped about 7 billion packages around the world last year, which equates to nearly one package for every person on Earth. 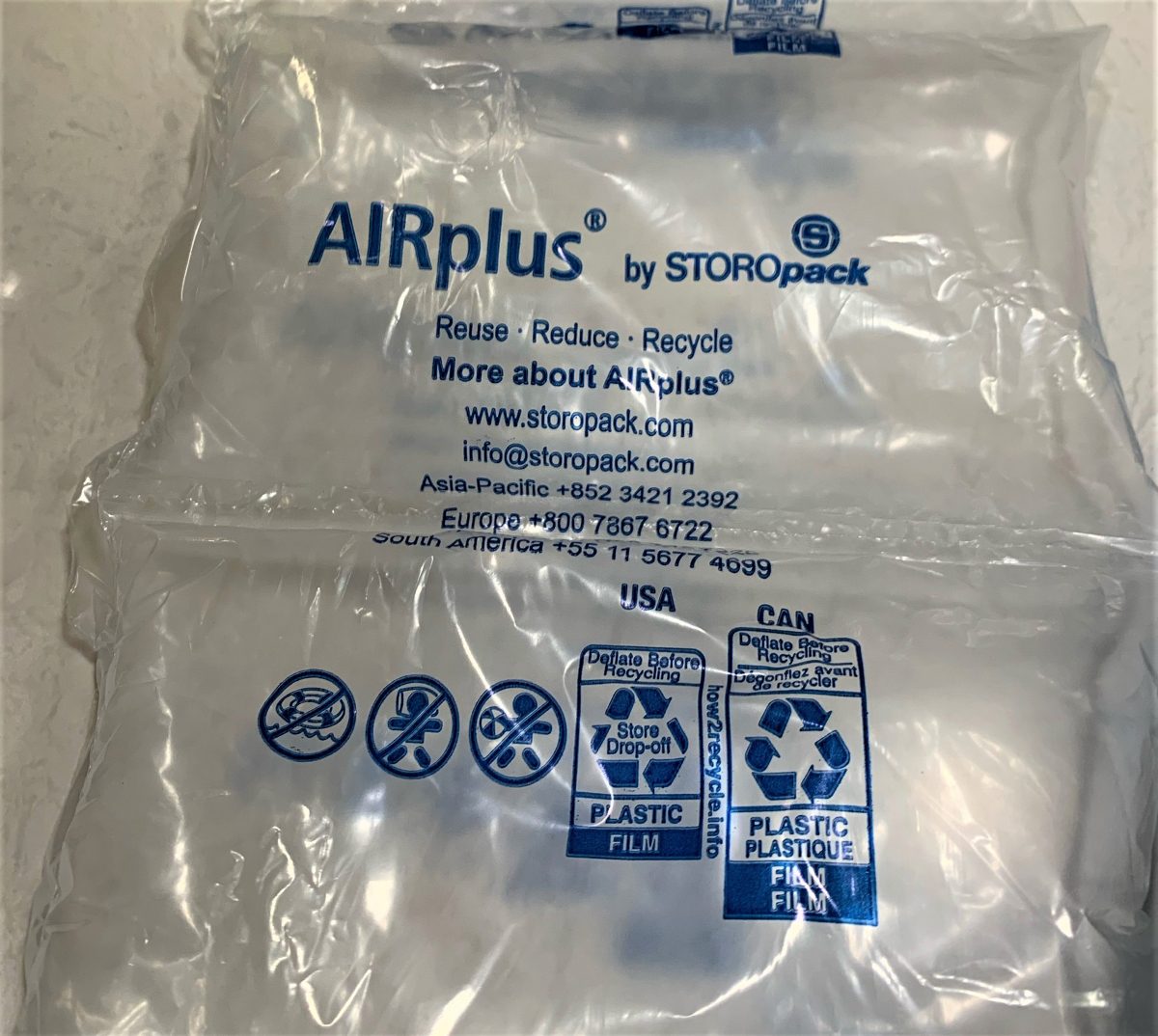 Packing peanuts and bubble wrap both have their drawbacks, as do air pillows, which are essentially air encased in plastic. You can try to reuse them when you send packages to friends and family, but eventually they deflate, rendering their life span relatively short. Like Amazon’s bubble-lined plastic bags, air pillows also carry the “how2recycle.info” label, indicating that they can be dropped off somewhere but cannot typically be placed in your curbside recycling bin. Even if accepted, the likelihood that such packaging is recycled remains in doubt. While sustainable and effective package fillers are hard to come by, innovative solutions are starting to emerge. Some of the finalists of the Sustainable Packaging Coalition’s “Protective Packaging Design Challenge” included Flexi-Hex, a 100% recycled paper-based product, and ClimaCell, a recyclable foam made from paper and plant starch. 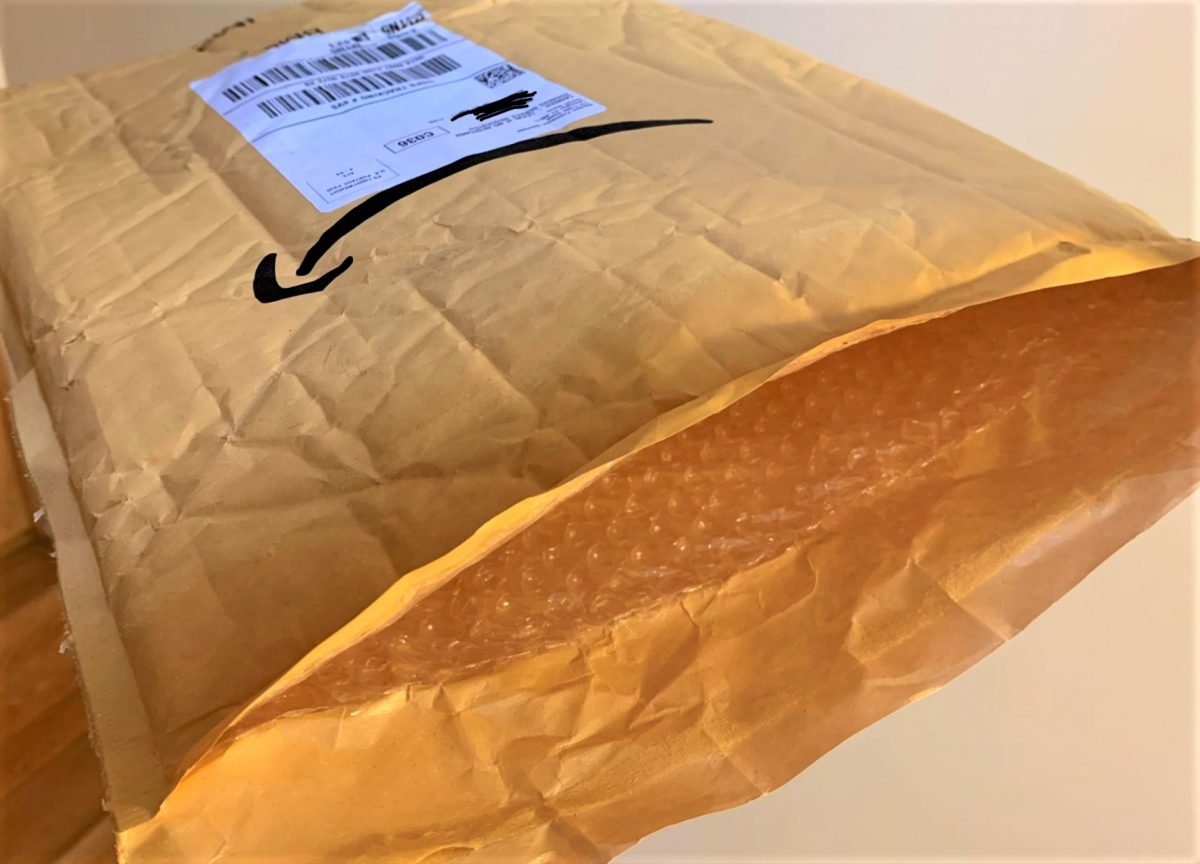 Here, you have a perfectly recyclable paper envelope – corrupted by a thin layer of bubble wrap. As soon as plastic is added to the mix, this envelope is given a one-way ticket to the landfill. This is because mixed materials are especially difficult to recycle. According to Amazon’s website, “Paper mailers with air bubble padding are not recyclable and should be put in your garbage bin.” 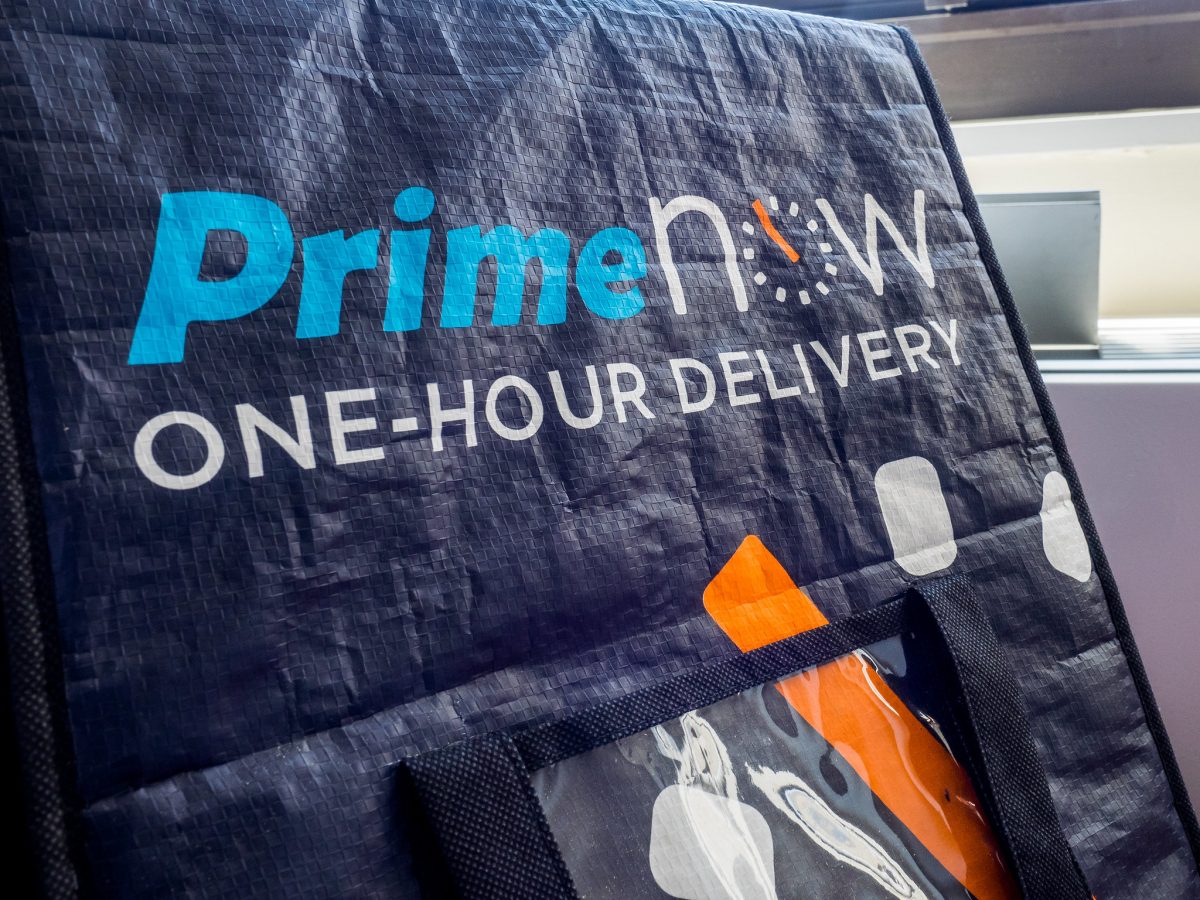 It is virtually impossible to recycle any of the plastics that come with Amazon’s grocery orders. Amazon’s foil bubble insulation bags, gel packs, and dry ice plastic film are not recyclable. Its insulated pouches are the only product that can technically be recycled – if you have the time and resources to jump through multiple hoops. According to Amazon, customers must first separate the insulating pad from the plastic mailer, then cut the pad open and remove the plastic film. After that, they must find a place that will accept #4 plastic film – easier said than done – and then find a place that will recycle the #60 cotton pads. Recycling is already hard enough without adding extra layers to it.

So what can you do about Amazon’s plastic problem?

Amazon values and depends on its customers. If enough people demand plastic-free options, there’s a good chance that Amazon will listen. In fact, the company has already done so in some markets. At its Fulfilment Centers in India – the world’s second most populous country – Amazon recently removed non-recyclable plastic from all packaging. It’s time to replicate and build upon that model elsewhere.

When asked to comment on Oceana’s survey, Amazon said it’s moving to packaging that’s compatible with either the paper or plastic recycling streams. In North America, Amazon said it’s working to double the number of fully recyclable cushioned mailers, and in Europe it’s expanding its use of paper mailing bags and paperboard envelops.

“We are looking across our entire operations network to incorporate more of our own recycled plastic in products, packaging, and operational processes,” Amazon said.

You can help hold Amazon to these commitments by signing this petition, which calls for Amazon to offer plastic-free packaging options. More than 500,000 people have already signed it, and those numbers continue to rise. The petition was launched by former Survivor contestant Nicole Delma, an Oceana supporter and Amazon customer who was dismayed by all of the plastic she was seeing in her packages.

“People want to be able to buy from Amazon and avoid plastic,” Delma said. “It makes them feel terrible when that package they’ve been anxiously waiting for arrives stuffed with plastic.”