Are Brazil’s Fisheries Heading Towards Collapse? Without Official Data, No One Knows

Brazil is one of the world’s most productive fishing nations, yet basic data about what kinds of fish are caught or how many boats are in operation is hard to come by. That’s because the last time the Brazilian government collected national-scale data on its fisheries was nearly a decade ago. Missing and flawed data threatens commercially valuable fish, endangered species and the millions of people who depend on Brazil’s oceans for food and income.

According to the United Nation’s Food and Agriculture Organization, Brazil ranks number 26 in the world for its catch of wild fish. An estimated 3.5 million people directly or indirectly depend on fisheries and aquaculture in this South American country. Yet the last time the Brazilian government published any official data on fisheries at a national level was 2011, using data collected in 2008.

“Fisheries have great socioeconomic importance and we need data to support decision-making and development of public policies for these sectors,” said Antônio Lezama, the conservation director for Oceana Brazil.

The lack of fisheries data entered public debate at the end of 2014, when Brazil’s Ministry of Environment published a new “red list” of 475 threatened fish and aquatic invertebrate species, which included many commercially valuable fish. The list sparked discord among conservationists and fishers, and was suspended and restored by judges several times after it was published. Now, although it is legally in effect, a definitive decision on a fishing ban is still pending. 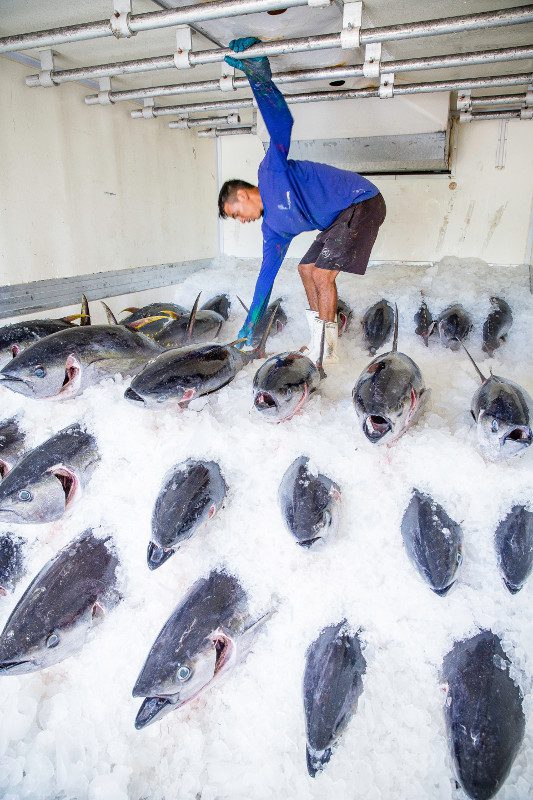 For Mônica Peres, the director of Oceana Brazil, the country is exploiting its marine life blindly. “We should not be planting the collapse of commercially important fisheries,” she said.

In December, Oceana Brazil launched a campaign calling attention to this issue. It hopes to mobilize the country’s population to send messages to the ministers of environment and agriculture urging them to resume producing accurate and ongoing fisheries data.

São Paulo: The exception, not the rule

“The only way you can make an evaluation of public policies is by collecting data,” said Antônio Olinto, coordinator of the Fisheries Monitoring Program of the Fishery Institute in São Paulo, a state-funded research agency. “If you establish, for example, closed fishing seasons, how do you know if it’s even working? How can you know if your management strategy is adequate?”

São Paulo, through the Fisheries Institute, is the only Brazilian state that has continuously monitored its fisheries since the 1960s. The Fisheries Institute’s work is so crucial to the fishing sector that, according to Olinto, artisanal fishers themselves use its records as official documents whenever they have to prove their catch, income and days worked.

“Our data is the main source of reference for many other government bodies, such as municipal administrations and state conservation agencies,” he said.

While São Paulo might keep good track of its fisheries, Olinto stresses that the nature of ocean fisheries requires national records. “The same sea bass that is caught in São Paulo is also caught in Santa Catarina and Rio de Janeiro. Our data is of course important, but still totally incomplete.”

The irony of oil

Paradoxically, the exploration of offshore oil in the Santos basin, in the southern half of the Brazilian coast, provided an opportunity for one of the largest regional data collection efforts in years.

The Statistical Fisheries Monitoring Project (PMAP) brought together research institutes from four Brazilian states — Rio de Janeiro, São Paulo, Paraná and Santa Catarina — to produce a fishery census of the basin. This initiative was funded by Petrobrás, Brazil’s national oil company, to fulfil a requirement of its environmental licensing process.

“This data will provide the most accurate picture of the fishing sector in the Santos basin region to date”, said Paulo Ricardo Pezzuto, a professor at University of Itajaí Valley (UNIVALI), in Santa Catarina, who will lead the project.

Pezzuto hopes PMAP takes a life of its own after its completion. “Our objective is that this data will have much further use than just the environmental licensing. It should be essential for subsidizing many other scientific analyses.” Although PMAP is slated to end in 2018, a website with the project’s data will be made available to the public in early 2017.

He pondered the irony of having such a large monitoring project happen as an offshoot of oil exploration. “We obviously can’t have an entire economic sector dependent on a single environmental licensing process,” Pezzuto said. “This project is extremely important, and thank god it is happening, but it should be conceived of, planned and funded by the applicable public authorities, in this case the Ministry of Agriculture and the Ministry of Environment.”

Oceana defends the creation of a federal fishery research institute, which would be responsible for collecting and analysing all fisheries data — a model adopted in countries like Chile, which in Lezama’s opinion has good management practices.

“We also need to develop state capacities, strengths and autonomy to manage smaller scale fisheries,” Peres said. “The federal level should be responsible for standardizing and compiling state fishing data collection and for developing state fisheries management guidelines. Brazil is a big country and it is hard to have all the work centralized at a small Secretariat in Brasília.”

Olinto adds that the strength of state institutions and the stability of teams is also of upmost importance for ongoing monitoring — for him, that’s what held together the São Paulo Fishery Institute’s monitoring program for the past six decades. “In all those years maybe six or seven people directed the process. In the Ministry of Fisheries, when it still existed, teams were changed six or seven times every year. Statistical monitoring is long-term process. You need to have continuity for it to work.”