Canned tuna is a staple in my pantry, and probably in yours. Americans and Europeans buy more of the squat little cans than anyone else, importing almost a million tons in 2018. Supermarkets carry at least 20 brands.

Yet, the fish we buy for $1.50 also dominates headlines as a creature in crisis because some tunas are badly overfished. It’s natural to wonder if any canned option is a sustainable choice.

Pick one with “pole and line” scrawled across its side for fish without a side of guilt, said Adam Baske, who specializes in tuna policy for the International Pole & Line Foundation, or IPNLF, in London.

Pole and line refers to an ancient, artisanal fishing method that supplies about 10 percent of the world’s canned tuna today, mostly from the western and central Pacific and the Maldives in the Indian Ocean. It doesn’t have the bycatch issues plaguing other gears, that accidentally snare and kill millions of tons of marine life every year, and it’s more labor intensive, meaning it creates more jobs.

Trot around a supermarket, and sooner or later, you’ll pass a wall of tuna cans. Grab one that says pole and line and feel yourself transported from the fluorescently-lit grocery aisle to the breezy waves of the tropics.

Fifteen fishermen stand shoulder to shoulder on a fishing boat, each holding a long pole, strung with a line and lure. They cast into an ocean simmering with tuna, and jerk fish out of the water one by one, flinging them into the back of the boat.

Since the fishermen catch one tuna at a time, and pull them onto the boat right away, there’s little chance to hook unintended sharks, sea turtles and diving seabirds. The few that do bite fishermen’s hooks are set free before they drown.

Compared to other fishing methods, like longlines and drift gillnets that can discard more than half of their catch, pole and line is much cleaner. It hooks 1 to 2 percent bycatch in the western and central Pacific, the largest tuna fishery in the world, said Peter Williams, a fisheries scientist with the Secretariat of the Pacific Community, or SPC, a regional development organization in New Caledonia. In the Maldives, pole-and-line bycatch is less than 1 percent.

That’s one reason the gear is so sustainable — another is the type of tuna it hooks.

Yellowfin and bigeye are also canned, but their populations are overfished in some parts of the world, so they’re not such great choices. And then there are the bluefins, the major tunas to avoid. All three bluefin species are threatened, and two are endangered or critically endangered, according to the International Union for Conservation of Nature’s Red List. Bluefin are huge, powerful, lightning fast and driven to the brink by their popularity in sushi. You’re unlikely to find them in the canned aisle. 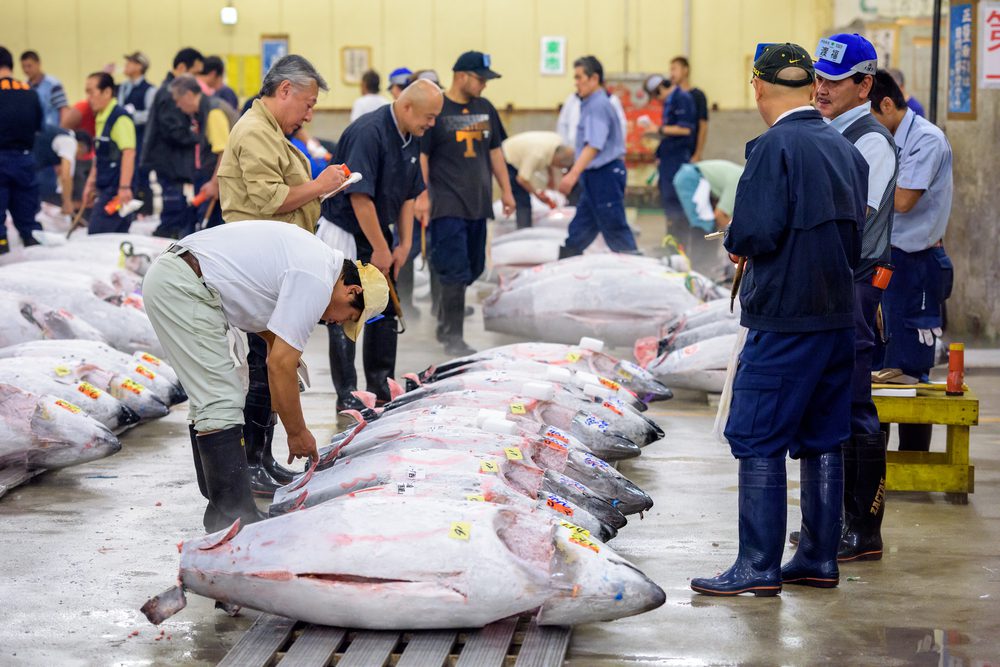 Choosing a simple can of tuna can be daunting when you consider where the fish was caught, the status of wild stocks and which gear landed dinner. Wouldn’t it be nice to have a simple answer? Tuna won’t let you off the hook so easily, but a little digging turns up some straightforward takeaways.

Finding “pole and line” on the side of the can is the most instructive marker. In the Maldives, this kind of fishing dates back centuries, and remains the country’s most important fishery, according to the Food and Agriculture Organization of the United Nations.

“Unlike a lot of other places in the world, being a fisherman is a great job in the Maldives,” Baske said. “People are proud to be fishermen and want their sons to be fishermen. The fishery provides quite a bit.” Most of the pole-and-line-caught skipjack in U.S. supermarkets comes from 15 to 20-man operations in places like the Maldives, Baske explained.

Maldivians eat a pound of fish a day on average, the highest per capita consumption in the world. Seventy-one percent of the population’s protein comes from fish, and every other staple food is imported.

Other Pacific countries like Indonesia, the Philippines and the Solomon Islands also depend on tuna for food, said Williams of SPC. “Most of the catch from these countries are from small-scale artisanal fisheries,” he said, making tuna key to their food security.

The circles on the map above, from IPNLF, represent pole-and-line fisheries around the world. Color corresponds to size, with green fisheries landing less than 4,999 tons per year, orange between 5,000 and 49,999 tons, and blue weghing in at more than 50,000 tons annually. Only the Maldives, Indonesia and Japan are blue.

Despite its benefits, pole and line is antiquated compared to industrial gears. Of the 2.5 million metric tons of tuna (worth $5.84 billion) hoisted from the western and central Pacific Ocean in 2017, just 6 percent came from pole and line, a historic low driven by the rise of more efficient gears in the 1960s.

Purse seiners now catch the vast majority of skipjack in the region: 79 percent in 2017. They’re much more efficient than pole and line, catching 50 to 100 times the tuna in a single encircling, purse-shaped net, Baske said.

Dead bycatch from purse seiners averages between 1 and 5 percent around the world, depending if and how fishermen attract tuna to the area. While that’s dramatically lower than gillnets or longliners, and only a tiny fraction are sharks (less than 0.5 percent by weight), vulnerable silky sharks are disproportionately affected. They are a slow-breeding, fish-eating species that hunt near the nets and account for more than 90 percent of purse seine shark bycatch. A quarter of all the silkies caught worldwide die in the purse seine fisheries of the western and central Pacific, according to the International Seafood Sustainability Foundation.

The silky shark’s predicament has some parallels to threats dolphins faced a few decades ago. If you bought tuna in the 1990s, you probably know the dolphin-safe label: a small, round badge guaranteeing dolphins didn’t die in the fishing process. Millions drowned back then, herded into nets with yellowfin. Laws changed in the intervening years, and today the vast majority of canned tuna sold in the United States is dolphin-safe, a certification enforced by NOAA Fisheries. Tuna should still have a dolphin-safe label today, but almost all of the canned brands do.

Silky sharks don’t have a label on tuna cans, nor do the sea turtles, seals or albatrosses dying in droves in industrial fishing gear. The side of the can is your best guide today.

Look for clearly-labeled skipjack or albacore, marked pole-and-line-caught. The safest bet is the cleanest method, even if pole and line supplies a tiny fraction of the tuna on grocer’s shelves.

“I don’t think it’s necessarily realistic to say it will supply all of the world,” Baske said. But artisanal fisheries that catch tuna one at a time, he said, “can, and should, make up a bigger part of the global supply chain.” 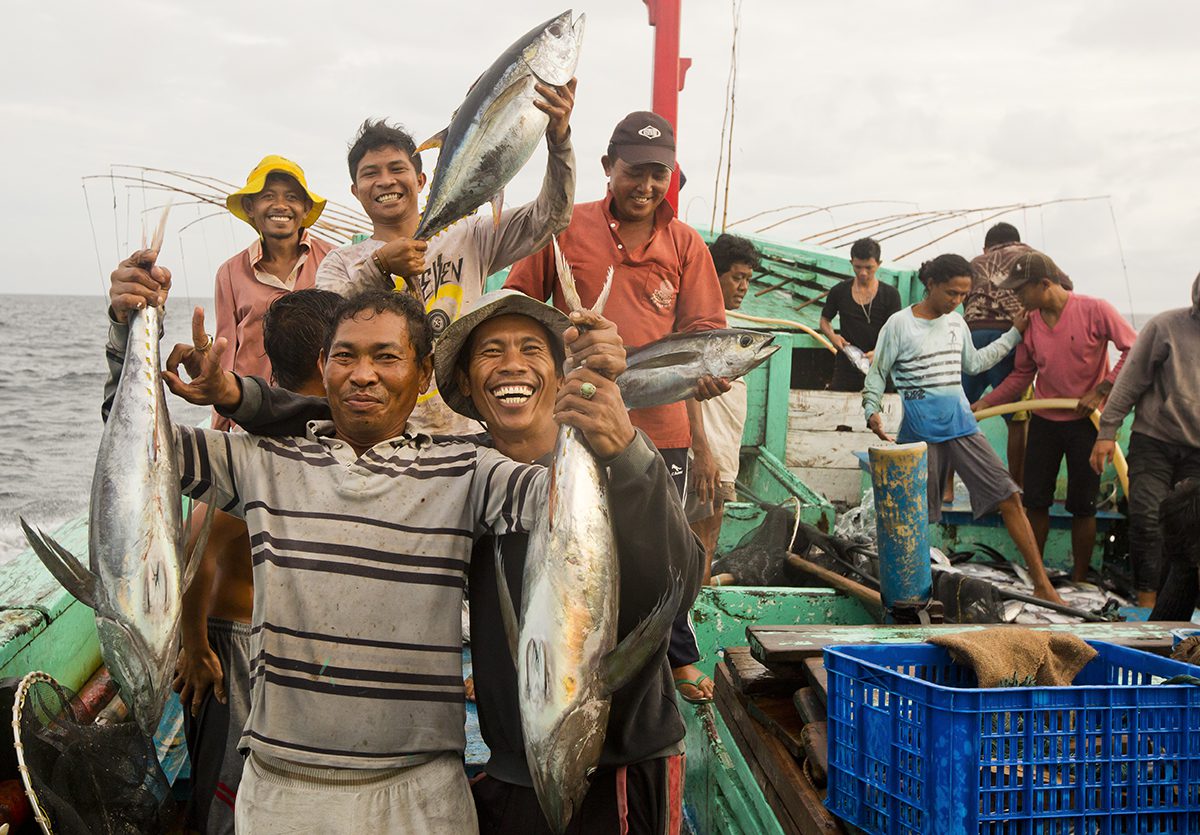