In a huge victory for Oceana, its allies and supporters, Chilean President Michelle Bachelet has unveiled protections for large swaths of ocean that include some of the most biodiverse and productive ocean places on the planet.

This change means that more than 25 percent of Chile’s ocean is now protected as marine parks. Oceana’s Vice President for Chile, Liesbeth Van de Meer, was present at the ceremonies when President Bachelet made this announcement signaling the central role Oceana has played in winning policy victories that have made Chile a true global leader in ocean conservation. 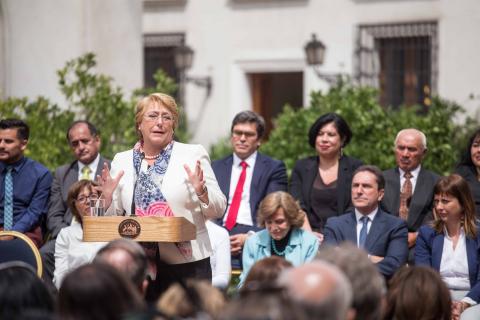 The new protected areas announced by the President include 262,000 square kilometers surrounding the Juan Fernandez Islands and over 6,702 square kilometers area around the southern town of Tortel. Oceana played a lead role in winning these protections. The proposal by the President also included the formation of a new national park — Parque Pumalin — that includes a million acres of land donated by Oceana supporter Kris Tompkins. As Liesbeth told the AFPO after the ceremony “The marine parks created are going to be laboratories for the world.”

Chile’s Juan Fernández Archipelago is most famous for having been the home to the shipwrecked sailor Alexander Selkirk, the likely real life subject and inspiration for Daniel Defoe’s world famous novel Robinson Crusoe. But, as Oceana found, the real reason why the Juan Fernandez islands are a world class destination are their incomparable marine ecosystems. The islands are home to seas full of wildlife found nowhere else on earth. Oceana worked closely with the local communities and small-scale fishers over several years to win protections for the sea while also preserving their own sustainable lobster and fishing efforts. The archipelago lies 600 kilometers west of Valparaíso and consists of three islands: Robinson Crusoe, Santa Clara, and Alejandro Selkirk. Oceana also partnered closely with National Geographic’s Pristine Seas project on this closure via joint expeditions, reports and direct advocacy.

The protected area in Tortel will be divided into an ocean area in the Golfo de Penas and another inland area covering the channels that surround Caleta Tortel. Two years ago, the fjords at Caleta Tortel were threatened by the installation of salmon fish farms which often wreaks havoc on marine ecosystems and the communities dependent on them (like Tortel). Caleta Tortel is a top destination for visitors to Chile’s Patagonia. There are no streets; all the houses are connected by wooden walkways. The proposal to protect Tortel was supported by Oceana over several years, and the need for protections was brought to life by five Oceana expeditions through photos, videos and scientific surveys. Our expeditions brought the species hidden below the surface to life — including Chilean dolphins and the colorful sponges and corals — and made it clear why these protections are so crucial.

“We are crowning a beautiful process by transforming the vision, will and action needed into bills,” President Bachelet noted during the ceremony, one of her last before handing over power on March 11 to conservative Sebastian Piñera.