I have great news about two important new campaign victories in Europe: Portugal and Spain will now protect more than 2 million square kilometers of seafloor habitat from destructive fishing gears.

Just this week, Portugal took a dramatic step to protect its marine resources by prohibiting bottom trawling in more than 2 million square kilometers of ocean. The decree prohibits all deep-sea fishing — with the exception of longlining authorized only under certain conditions — to protect Portugal’s fisheries and deep-sea ecosystems. The area now closed to destructive fishing methods is more than three times larger than Texas. This decision comes after Oceana’s campaign to ban bottom trawling below 600 meters in all of the Northeast Atlantic Ocean. Oceana had already achieved a bottom trawling ban around the Portuguese archipelagos of the Azores and Madeira, which now has been extended to most of the waters of the country.

Just a few years ago, Portugal had the lowest percentage of protected ocean in all of Europe. With this ambitious project, the Portuguese government looks to switch from a straggler in ocean conservation to one of the preeminent leaders. Portugal’s decision to protect 2 million square kilometers of its ocean is an admirable example for the EU, and for all coastal countries of the world.

And just a few weeks ago, after years of campaigning by Oceana, the Spanish government banned bottom trawling in two seamounts and the Fort d’en Moreu coral reef, just off the coast of Spain’s Balearic Islands, including Mallorca, Minorca, and Ibiza. Oceana scientists and campaigners spend many years documenting the amazing sea life that inhabits these places and then used this information to campaign for protections. Using a remotely operated vehicle, Oceana’s scientists gathered the first underwater footage of the Emile Baudot escarpment, a large, rocky wall running more than 180 miles from Ibiza to Mallorca. They found astounding array of marine life, including fields of brachiopods and crinoids on the slopes of the escarpment. This work and the subsequent campaigning with expedition documentation has paid off with real protections for these important and productive underwater ecosystems.

While we applaud these measures, there is still more to do. Oceana’s European campaigners are currently urging the Spanish government to expand Spain’s Cabrera National Park to include all three of the places recently closed to bottom trawling. Additionally, Oceana is calling for Portugal’s ban to be extended to other destructive fisheries in Portugal and the rest of the European Union.

You can help our work in Europe by donating today. Thank you for your continued support. 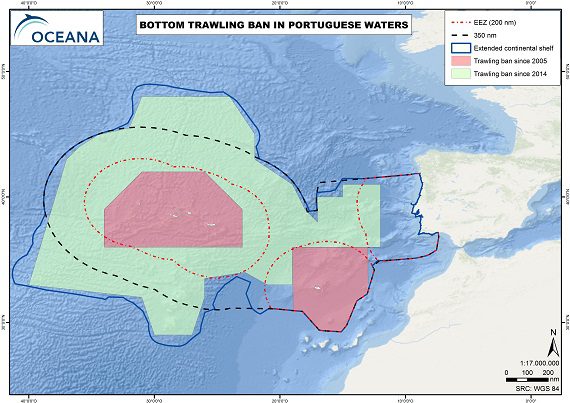