A bluestreak cleaner wrasse searches an oriental sweet-lip for parasites. Despite their tiny brains, cleaner wrasses make remarkably clever decisions about who to help and who to hurt.
Boris Pamikov / Shutterstock

It takes a big brain to be a good criminal. Only a handful of species have the smarts to cook up a good lie, or cheat without getting caught. Humans are particularly good deceivers, along with great apes, ravens — and the bluestreak cleaner wrasse.

Though its brain weighs less than a tenth of a gram, the four-inch reef wrasse somehow manages to match — or even beat — egghead animals in certain feats of cunning. This marine Machiavelli uses its powerful memory and grasp of game theory to lie, cheat and sweet-talk its way to a full belly.

Biting the fin that feeds you

The cleaner wrasse lives in the ocean’s equivalent of New York City: crowded, vibrant and with fierce competition over real estate and business deals. Just replace the skyscrapers with heads of coral. 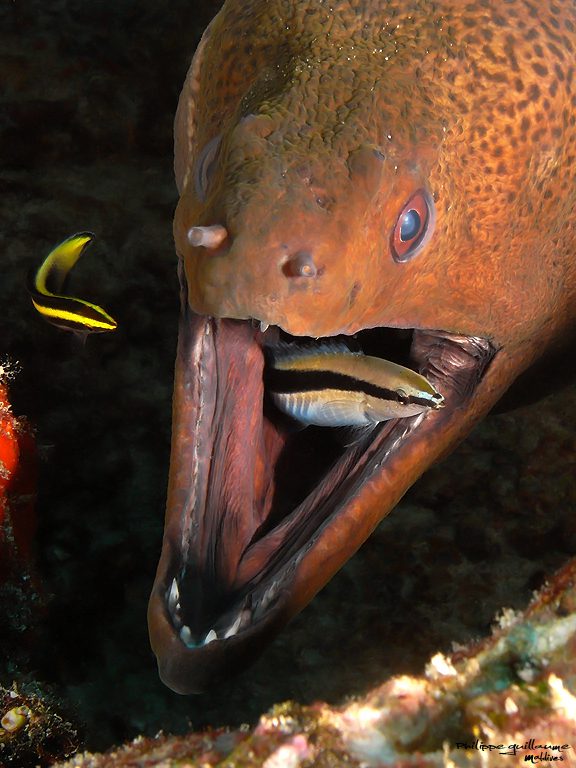 In the hustle and bustle of an Indopacific coral reef, this blade-shaped wrasse earns its living by nibbling parasites off ‘client’ fish that regularly stop by for a scrubbing. The wrasse gets a meal, and the client gets clean.

But there’s a catch to this happy arrangement. Scales, skin and mucus are more nutritious than parasites, and the bluesteak cleaner wrasse sometimes can’t resist the temptation to take a chunk out of the fish it should be helping.

To bite or not to bite — that’s the tactical decision that a wrasse needs to make. To make this choice, wrasses are aided by a prodigious memory. One wrasse can complete 2,000 cleaning sessions each day and may be able to keep track of more than 100 individual clients.

Bluestreak wrasses can also remember if the most recent interaction with one of its hundred-plus clients was positive or negative. If it previously mistreated a valuable customer —a big fish with lots of parasites, for example — the wrasse will offer an apology in the form of a more pleasant cleaning with an added fin ‘massage.’

Intelligent mammals like dolphins, chimps and humans all treat each other more affectionately to reconcile after conflicts. The bluestreak wrasse might be the only non-mammal that plays extra nice to make up for bad behavior.

Wrasses lump their client fish into one of three categories. First, there are dangerous predators. Not surprisingly, cleaner wrasses almost never cheat the fish that could eat them. They also stick to the rules when servicing ‘floater’ fish that range across the reef and have a menu of other cleaning stations to choose from.

But when it comes to small resident fish, bluestreak wrasses can be downright rotten. If a floater fish comes along, the wrasse will make the resident wait for a cleaning, even if the resident got there first. And, so long as no one else is watching, the wrasse is far more likely to take painful chomps out of its client-for-life.

These homebodies, after all, have no other choice. 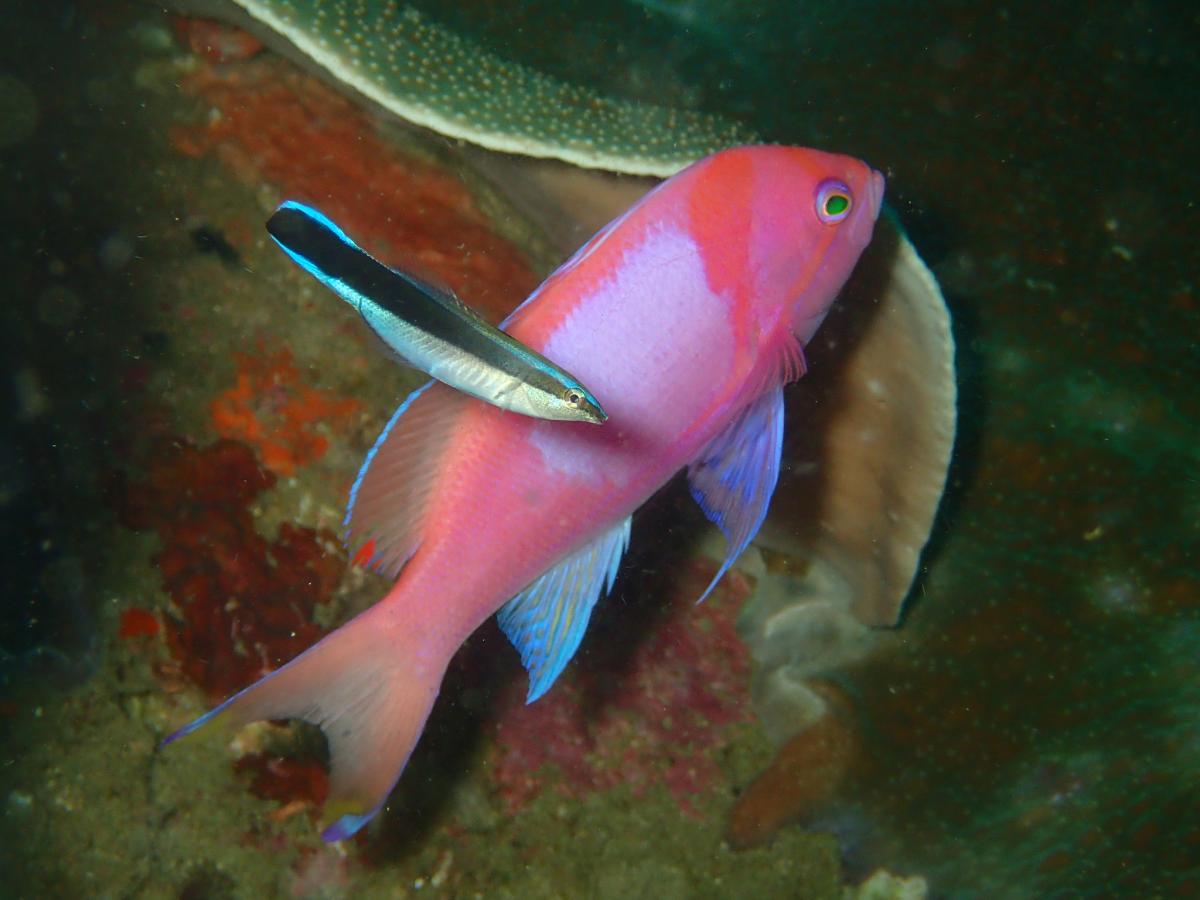 Knowing which clients are picky and which ones aren’t is behind these cleaner’s incredible ability to outperform great apes on one intelligence test.

In a 2012 experiment that presented chimpanzees and orangutans with two plates of food — one permanent, one temporary — the apes usually chose which plate to eat from first at random. They never learned that they should pick the dish that the researchers could take away at any moment.

Bluestreak wrasses, on the other hand, quickly figured out they should clear the impermanent plate first before switching to the guaranteed second course.

The massage is the message

Bluestreak wrasses also display primate-like levels of cunning when it comes to performing for an audience. Potential clients often carefully observe the cleaners, watching for any sign of misdeeds. If they see a current client jump in pain from a pain, these window-shoppers go elsewhere.

But the wrasses have a solution for avoiding bad PR. If a queue of clients has lined up, these pipsqueak schemers not only stick to the rules — this is, eating parasites alone — they also ham it up for their audience by massaging the client with flutters of their fins.

Fish massages work almost exactly the same way they do in humans. A comforting touch, whether from hands or from fins, lowers the stress hormone cortisol and leads to a sense of wellbeing.

Happy customers are return customers. And a clearly blissful client is a perfect advertisement to other fish that the wrasse runs a five-star establishment.  By portraying itself as honest, the cleaner ensures a steady supply of clients — and food.

It’s a bit of a mystery how these wrasses pack so much intelligence into such a tiny skull. Compared to related species, its brain size is about average. In a 2015 study, the researchers concluded that either Machiavellian tactics aren’t as mentally demanding as they seem, or that evolution has reorganized the bluestreak brain to increase its computing power without increasing size.

Not all cleaner wrasses, however, are eggheads. A 2014 experiment showed that cleaner wrasses from small patches of reef failed intelligence tests that their counterparts from big, continuous reefs passed handily. This suggests that socially complex environments trigger complex behavior.

Even if we haven’t unlocked the secrets of cleaner wrasse smarts, these fish do reveal some secrets to success.  Advertise. Treat VIPs well. And massages make a great apology.

In Belize, the Philippines and beyond, Oceana works to protect coral reefs and their cunning wrasses from oil development and destructive fishing. Donate today to support our work. 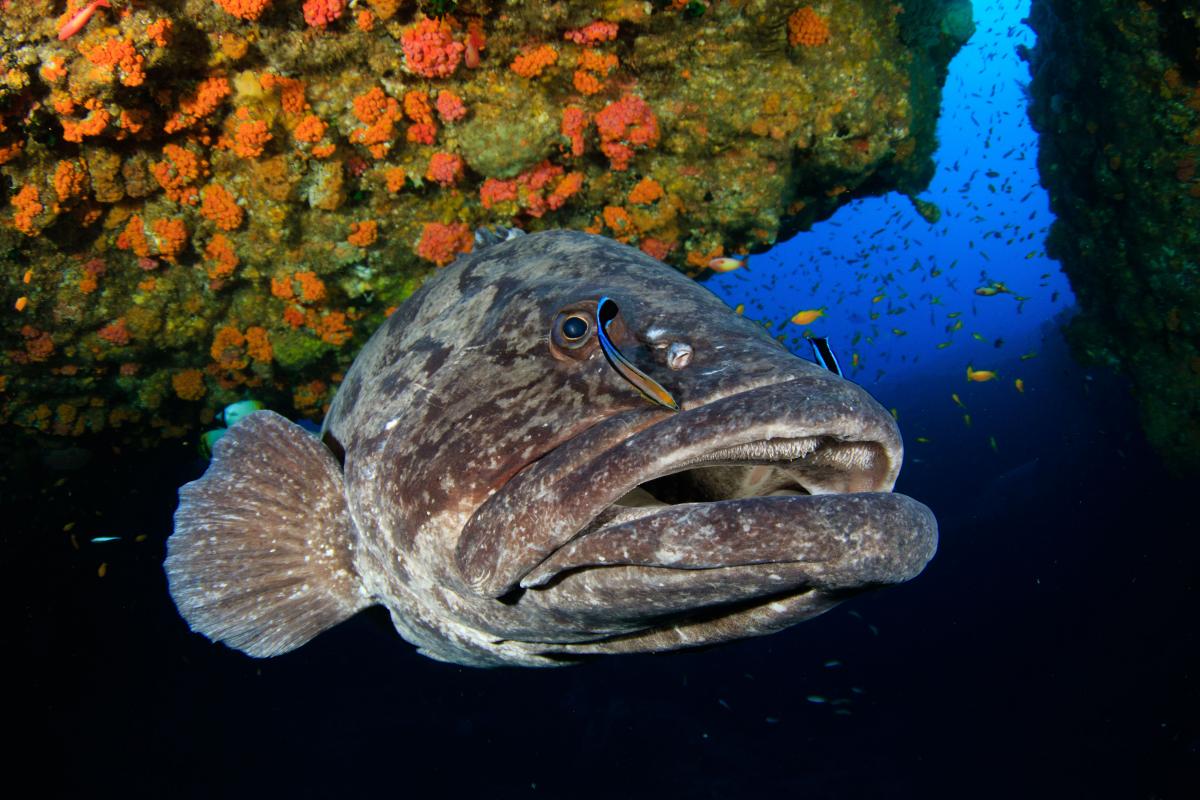