Chaos and Caviar: Winning the fight to bring science to Brazil’s struggling fisheries

At first glance, bottarga looks like a cured, honey-orange sausage. But this pricey Mediterranean delicacy is actually the dried, salted egg pouch of a mullet. Bottarga’s intense, caviar-like flavor has won it plenty of fans, but in the southern Brazilian state of Santa Catarina, its popularity has set off a battle.

There, the demand for bottarga has pitted industrial fishers, who mainly catch mullet for its eggs, against small-scale, local fishers, who have traditionally relied on mullet for food and income. In recent years, mullet have struggled under this one-two fishing punch, leading scientists to worry the population could crash.

It was clear that these important fish needed responsible fishing rules to survive. Brazil, however, is crippled by government corruption and scandals. It’s a harsh environment for science and the rule of law.

Despite this, in 2016, Oceana made a bet that it could draw up science-based mullet regulations — and get fishers and the government to agree to them. The bet is part of a broader Oceana strategy to restore key Brazilian fisheries and protect embattled ocean habitats. And as recent victories show, positive change is possible, even in the midst of chaos. 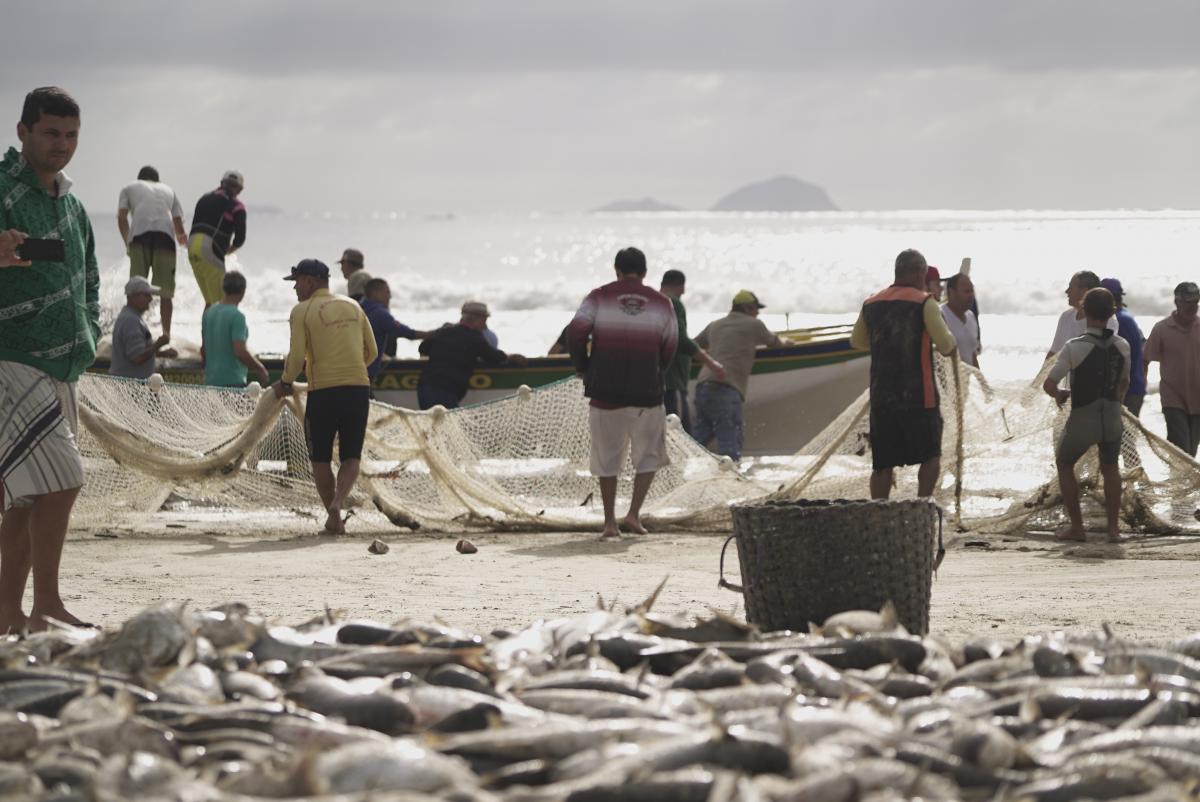 In Brazil, fishing is a big deal. The country is home to nearly 900,000 full-time fishers, and a further 3.5 million directly or indirectly involved in the seafood industry.

But government oversight of fish and fishers is in disarray. It’s been a full decade since the government collected any national-scale fisheries data. The law to combat overfishing is just one sentence long. And the fisheries department has been knocked from ministry to ministry in recent years: first the Ministry of Fisheries in 2009, then the Ministry of Agriculture and Poultry in 2015, then the Ministry of Industry and Commerce in 2016, and finally buried under the office of the president in 2017 as a Special Secretary of Fisheries and Aquaculture.

These moves have robbed fisheries officials of their legislative clout. Ugo Vercillo, Director of the Department for Species Conservation and Management at the Ministry of the Environment, described Brazil’s fisheries challenges in poetic terms: “It’s like playing with a toy made of sand.”

In Santa Catarina, the epicenter of Brazil’s mullet fishery, economic changes compounded the already considerable political problems facing fisheries officials. Industrial fishers began targeting mullet, locally known as tainha, sometime in the early 2000s, said Henrique Anatole, the head of the sustainable fisheries unit at the Ministry of the Environment. Artisanal and industrial fishers clashed as the years wore on, each side blaming the other for tainha’s slipping numbers.

Santa Catarina officials unsuccessfully tried to mitigate the conflict, Atatole said. Some local prosecutors even argued that the industrial fishery should be shut down entirely, a move that accomplished little more than further angering the industrial fleet.

Oceana waded into this tense situation in 2016, certain that science could help untangle the Gordian knot that politics had tied. But first, the team needed to demonstrate that fishery management basics like data collection were even possible in Santa Catarina, and that they were workable using simple, inexpensive tools, explained oceanographer Ademilson Zamboni, the head of Oceana in Brazil.

The team carried out two scientific assessments of the mullet stock, and in 2017 successfully persuaded small and large-scale fishing associations to voluntarily collect catch data. Oceana designed an online portal called the Tainhometer, or Mullet Meter, to allow fishermen to report in real-time the weight and timing of their catch, as well as the location and gear used.

These efforts paid off. Santa Catarina fisheries officials used the Tainhometer’s data to set mullet quotas for the 2018 fishing season — the first-ever data-driven catch limits for this fishery.

“I think it was a great success,” said fisheries official Anatole. He praised the system of rules, noting that they enabled a quick end to the industrial season, after the fleet maxed out its quota in just 11 days. In early September, the Quota Monitoring Committee, a government group based in Brazil’s capital, reported that the quota system had, for the most part, staved off overfishing for the year. 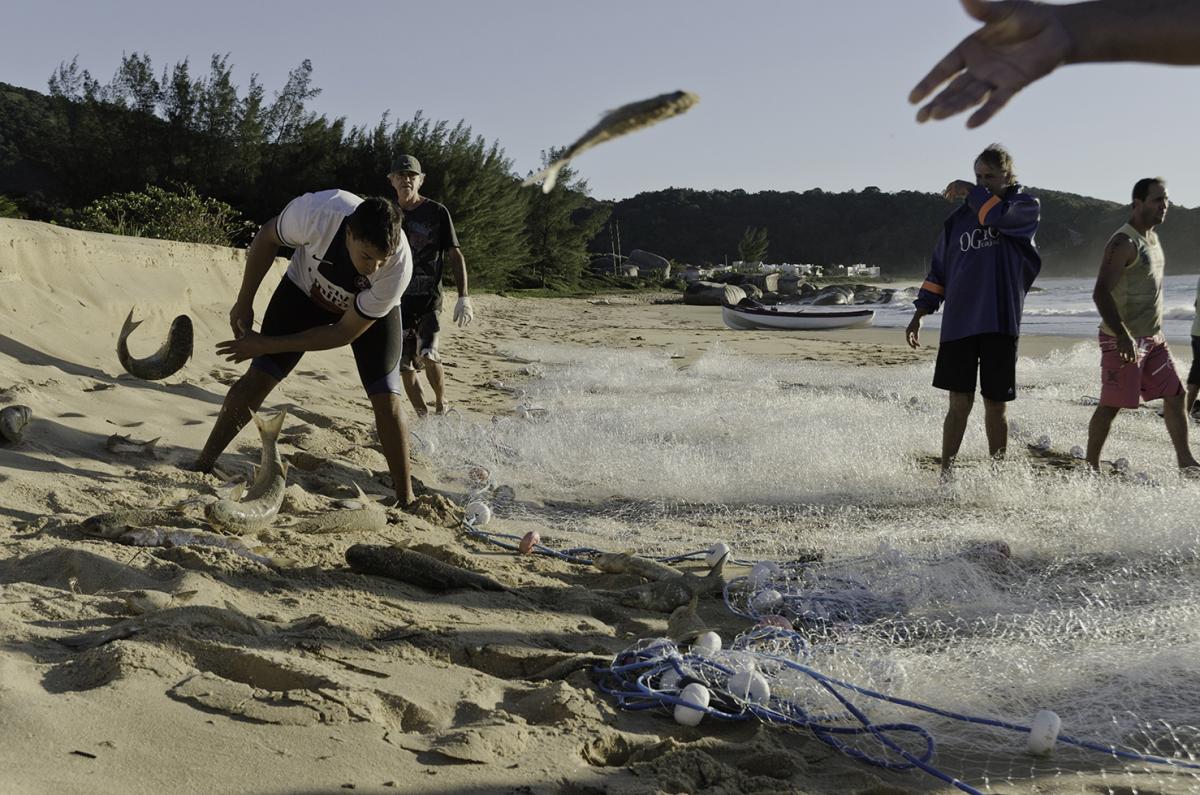 In Brazil, it’s not just mullet that’s in trouble — far from it. According to some estimates, 80 percent of fish stocks are fully exploited or overexploited, meaning only 20 percent can withstand any extra fishing pressure. “Right now,” said Anatole, “our fisheries are in very bad shape.”

Dozens of marine fish and shellfish are on the “red list” of nationally threatened plants and animals. Several of these are significant seafood species, including the blue land crab, which is important to fishing communities, and the endangered dusky grouper. In 2016, Oceana successfully campaigned to reinstate the red list, after industrial fishing interests lobbied a judge to throw it out.

Until recently, however, the laws protecting these threatened fish and crustaceans had no teeth, Zamboni said. The government merely forbade the fishing of red list species — a decree that, unsurprisingly, most fishers ignored. Data indicated that some of these animals had even declined further since the red list was reinstated.

So this year, Oceana and the Ministry of the Environment got together to draft data-driven recovery plans for six red list species, a first for Brazil. The plans include rules such as minimum size, closed seasons and habitat protections — rules designed to reduce fishing pressure, while still allowing fishers to earn income.

“We moved from the side of the problem to the side of the solution,” Zamboni said. Vercillo agreed, saying that efforts like these have brought government scientists and the fishing sector closer together than ever before, even “in the middle of chaos.”

On the side of science

Sometimes, circumstances do call for flat-out bans. That was the case in Rio Grande do Sul, the southernmost state in Brazil. Once home to the most productive fishing grounds in the country, more than 90 percent of the state’s fishing businesses have shut down in the last 30 years.

A major culprit has been unregulated, out-of-state bottom trawlers, which catch fish by dragging heavy nets along the seafloor. Trawl nets indiscriminately scoop up juvenile fish and non-target animals, and also rip up sponges, corals and other organisms that build rich habitat. Zamboni estimates that 70 percent of bottom trawl catch in Brazil is thrown out.

For years, local fishers had watched crews from other states shunt fish, and money, away from Rio Grande do Sul. So in 2017, artisanal and commercial fishing representatives approached Oceana to support their calls for a ban on bottom trawling. Oceana agreed, and organized a parliamentary coalition in favor of the ban. At the same time, press coverage, fishermen protests and a WhatsApp messaging campaign fostered widespread support to end bottom trawling.

Finally, in September, the state parliament unanimously passed the ban law, which Oceana had drafted. The new law covers a band between the coast and 22 kilometers, protecting an area of 13,000 square kilometers.

For fisheries advocates, the law was a welcome surprise. “It was against all predictions,” Zamboni said. “Nobody believed it was possible to pass this act in an election year.”

These wins aside, fisheries advocates are under no illusion that change is easy in Brazil, at least right now. But Oceana and its allies in the government have a not-so-secret weapon. “People can disagree with you,” Zamboni said, “but if you have the science, they will respect you.”

This story appears in the current issue of Oceana Magazine. Read the full issue here, to dive deeper into our work around the world.