CITES Listing Countdown: Less Than One Month until Manta Rays are Protected

On September 14, 2014, the Convention on International Trade in Endangered Species of Wild Fauna and Flora (CITES) will add seven sharks and rays to Appendix II, meaning that global trade of these species will be restricted. At Oceana, we work to protect marine species from overexploitation every day, so we’re thrilled about the new listings. To celebrate, we’ll be spotlighting all seven species that are receiving protections on September 14 in a series of countdown blog posts on The Beacon. We’re spotlighting manta rays first, but stay tuned to learn more about the other five species!

You may recognize manta rays for their stark, white undersides contrasted with gray-blue-black colorations on top. This, combined with their graceful underwater movements, make manta rays some of the most majestic, iconic creatures swimming in the ocean.

Unfortunately, these beautiful creatures have been targeted for their skin, cartilage, and gill rakers—thin filaments used to filter food. The demand for gills in traditional Chinese medicine (TCM) has risen drastically over the past decade because they are believed to boost immune systems, cure cancer, improve fertility, and more, according to Scientific American. Even though living manta rays bring in far more revenue through ecotourism at $27 million than through their products at $11 million, the demand for gill rakers in TCM continues to grow. Additionally, manta ray cartilage is used as filler in shark fin soup and their skin is used to produce shoes, wallets, and sandpaper.  All of this, coupled with overfishing and bycatch, has led to a 30 percent decline in manta rays worldwide.

Under the new protections in the Appendix II listing, the take and trade of manta rays will be controlled in an effort to protect them from severe population declines. The protections will extend for the two species of manta ray: the giant manta (Manta birostris), and the smaller reef manta (Manta alfredi). 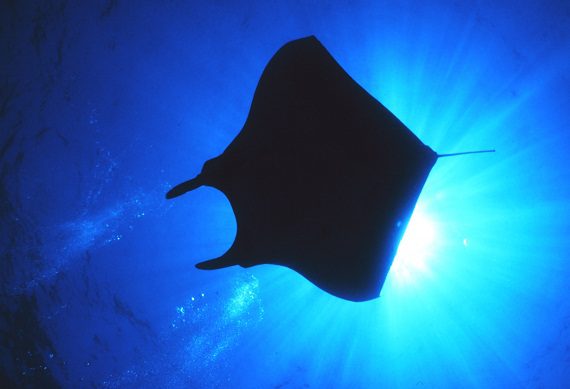 Under the new regulations, manta rays will join whale sharks and basking sharks, which were protected in 2003, great white sharks, which were protected in 2005, as well as the other five species of sharks to be protected in September. The new regulations will require proof that their trade is legal, sustainable, and traceable. These seven species received the Appendix II designation at CITES’ 16th meeting of the Conference of the Parties in March 2013, but the changes did not take effect for 18 months to allow Parties to work out technicalities of the listing.

Manta rays have a broad range, inhabiting tropical and temperature waters worldwide in both nearshore and offshore waters. The giant mantas are the largest ray or skate, capable of growing up to 22 feet from wingtip to wingtip and can weigh up to 3,000 pounds, while the reef mantas are a bit smaller at 18 feet long. Though they’re filter feeders like whale sharks and typically just eat plankton and krill, these gentle giants can eat 60 pounds worth of food a day. Manta rays are closely related to sharks, skates, and other rays, which all belong to the class Chondrichthyes.