Doomed by their beauty, nautiluses could be headed toward extinction

If ever there was a timeless beauty, the nautilus is it. Boasting elegant spiral shells, recognizably nautil-esque mollusks have zipped through the ocean’s depths for 500 million years. Their iconic shell has sheltered nautiluses through glaciations, big melts and mass extinctions. But in recent decades, this shelter has become a trap.

Shell collectors are loving the chambered nautilus to death, according to an October report from the United States’ National Marine Fisheries Service, or NMFS. Our taste for nautilus-shell jewelry and souvenirs has stripped these cephalopods from their habitat in the Philippines and Indonesia. In some spots, they’ve declined by 80 percent in recent decades.

“Natural selection has a whole new game in town,” said Peter Ward, a nautilus expert at Seattle’s University of Washington. And that game is called: “if you are pretty to a human, you are probably going to die.”

Scientists have sounded alarms about nautilus overharvesting since 2014. All nautilus species grow and reproduce slowly, reaching maturity between 10 and 17 years old, and laying just 10 or 20 eggs a year. We’re trapping and killing them at a rate they can’t withstand. 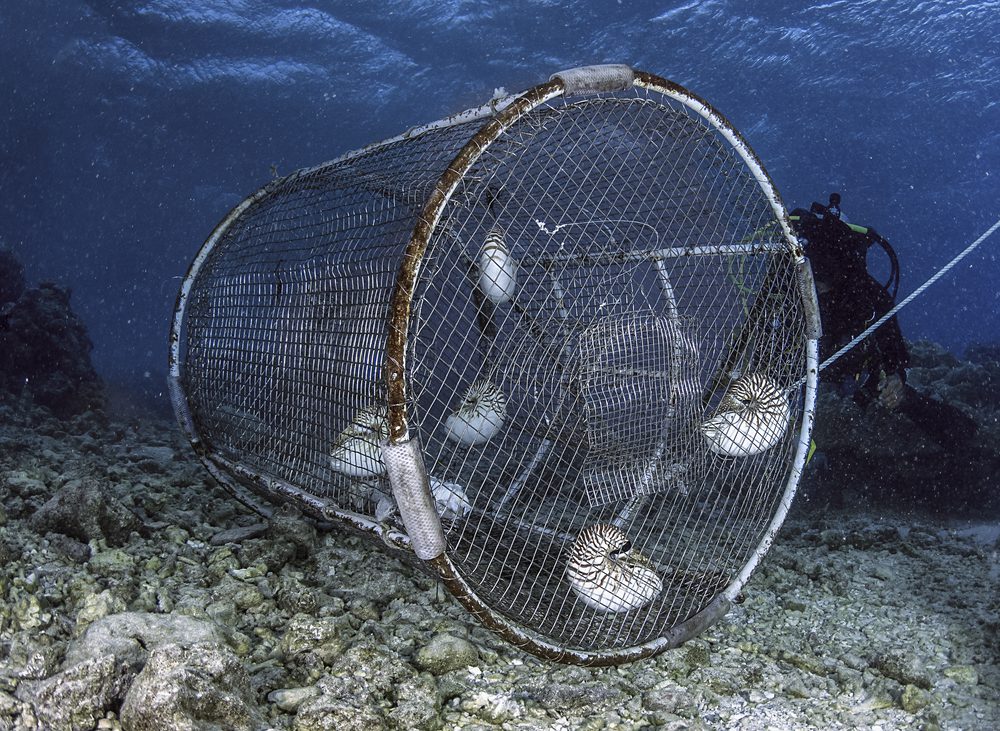 Recently, Ward has noticed a new threat from above, beyond our demand for their tiger-striped shells.

He and a colleague examined the chemical make-up up of nautilus shells to determine their position on the food chain. Depending on the ratio of certain types of nitrogen its body, researchers can figure out if an animal is a top carnivore like a shark, or an herbivore like a manatee.

Nautiluses scrounge on the ocean’s leftovers — molted lobster shells, fish carcasses, small, burrowing critters — so they should be somewhere in the middle of the food chain. When the chemical analysis of their shells put nautiluses near the top of the pecking order, Ward was surprised.

“It turns out it’s a false reading,” he said. The nitrogen ratio can be thrown off if an animal is starving. “And that’s exactly what’s going on with these guys,” he added. “Every single one of them seems to be starving to death.”

A lot of nautilus food drifts down from the surface in the form of dead creatures. Ward suspects that after fishermen get their turn, there aren’t enough fish and squid left behind to eventually die and sink to nautilus-friendly depths. Poorly regulated fishing in the Philippines and other countries has stripped the ocean of seafood.

Together, these developments paint a picture of an animal and an ecosystem in dire straits. But considering how low the nautilus supply is running, it’s still remarkably easy to buy one. While a single elephant tusk or rhinoceros horn can go for hundreds of thousands of dollars on the black market, a nautilus shell starts at around $30 on Amazon or eBay. 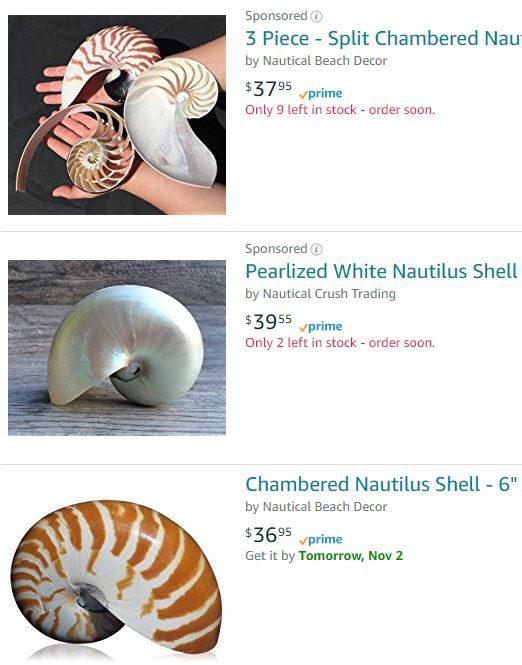 Selling these ancient mollusks in the United States could get tougher soon. In its October report, NMFS recommended adding nautiluses to the U.S. Endangered Species Act. This would complement a 2016 listing under the Convention for International Trade in Endangered Species.

If NMFS decides that nautiluses fit the U.S. definition of endangered, it would effectively end the 100,000-shell-a-year commercial trade in nautilus curios and jewelry in the United States, said Tanya Sanerib, a senior lawyer at the Center for Biological Diversity in San Francisco. Though the U.S. is not the only nautilus importer, it’s one of the biggest. Cutting out American demand for their shells would be a big boon to these species.

But NMFS appears to be leaning toward a weaker “threatened” protection rather than an endangered listing, Sanerib said. While a threatened designation requires the agency to enact regulations that are necessary for the species’ survival, it leaves it up to officials to choose which particular import rules and conservation measures to adopt.

“In a lot of instances we get these threatened listings from NMFS, but without any teeth to them,” Sanerib said.

One of the big problems with a continued legal trade in nautilus parts is that it could cover for black market dealings. Elephant poaching soars, Sanerib noted, when governments announce legal sales of stockpiled ivory. A total ban on importing nautiluses to the United States, except for conservation reasons, would be one of the best ways to protect them.

With this in mind, Sanerib said that the Center for Biological Diversity will likely advocate for a full endangered listing for nautiluses, and, barring that, getting “real, meaningful protections” under a threatened listing.

The road to shell

Ward welcomed the possibility of a listing under the Endangered Species Act, but explained that regulating the nautilus trade would be just the tip of the iceberg. “The larger war,” he said, “is shutting down the tropical shell trade.”

If you’ve ever visited a beach souvenir shop and wondered where those shelves of conchs, clams, cowries and triton’s trumpets came from, they were probably plucked off a tropical reef. Many of these species are now rare or locally extinct.

The wholesale culling of eye-catching shellfish bodes poorly for coral reef health. The giant triton, for example, is one of the few predators of the coral-eating crown-of-thorns starfish, which, if left unchecked, can destroy reefs. Other species of sea snail are food for reef fish and octopuses. Their empty shells become hermit crab homes and, eventually, the sandy beaches that vacationers love.

Ward said that it’s up to wealthy consumers to stop killing these creatures for their beauty. “Everyone who wants their own little shell collection is adding to the decimation,” he said. “All these pretty things were not put on the planet so we could put them on our bathroom shelves.” 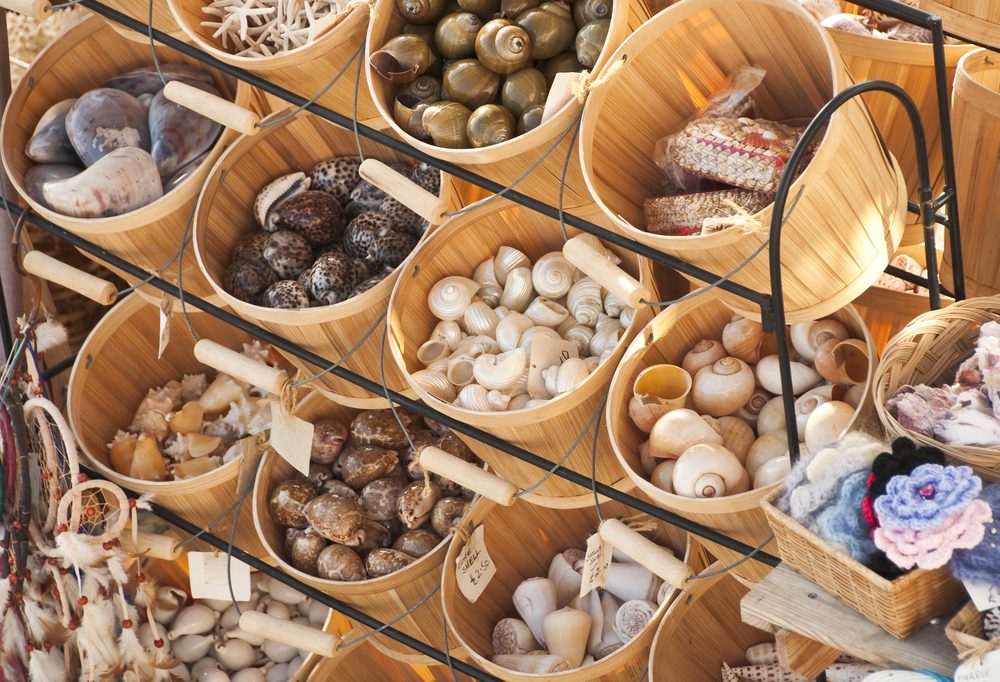