A unique group of killer whales is miscarrying at an astronomical rate, and it’s because humans have wiped out most of their food supply.

A recent study in the journal PLOS ONE found that as high as 69 percent of Southern Resident killer whale pregnancies end in failure. These famous whales, which frequent the Salish Sea off Seattle and Vancouver, rely on Chinook salmon for the lion’s share of their diet. Once abundant, Chinook are now rare and the whales are going hungry. The study is the first to demonstrate a clear link between orca miscarriage and poor nutrition brought on by the scarcity of their main prey.

Scientists at the University of Washington collected orca feces between 2008 and 2014 to measure hormones that regulate hunger, stress and reproduction. DNA profiling let them track the stages of pregnancy for individual orcas, and figure out when a female became pregnant and at what point she lost her baby.

Lead author Samuel Wasser said that for mammals, spontaneous abortion becomes increasingly rare as a pregnancy progresses. This is not the case for Southern Residents. “Out of the 69 percent that aborted, about a third of those were in late pregnancy,” Wasser said. “That’s a period that’s extremely costly to females. It’s a pretty serious problem.” 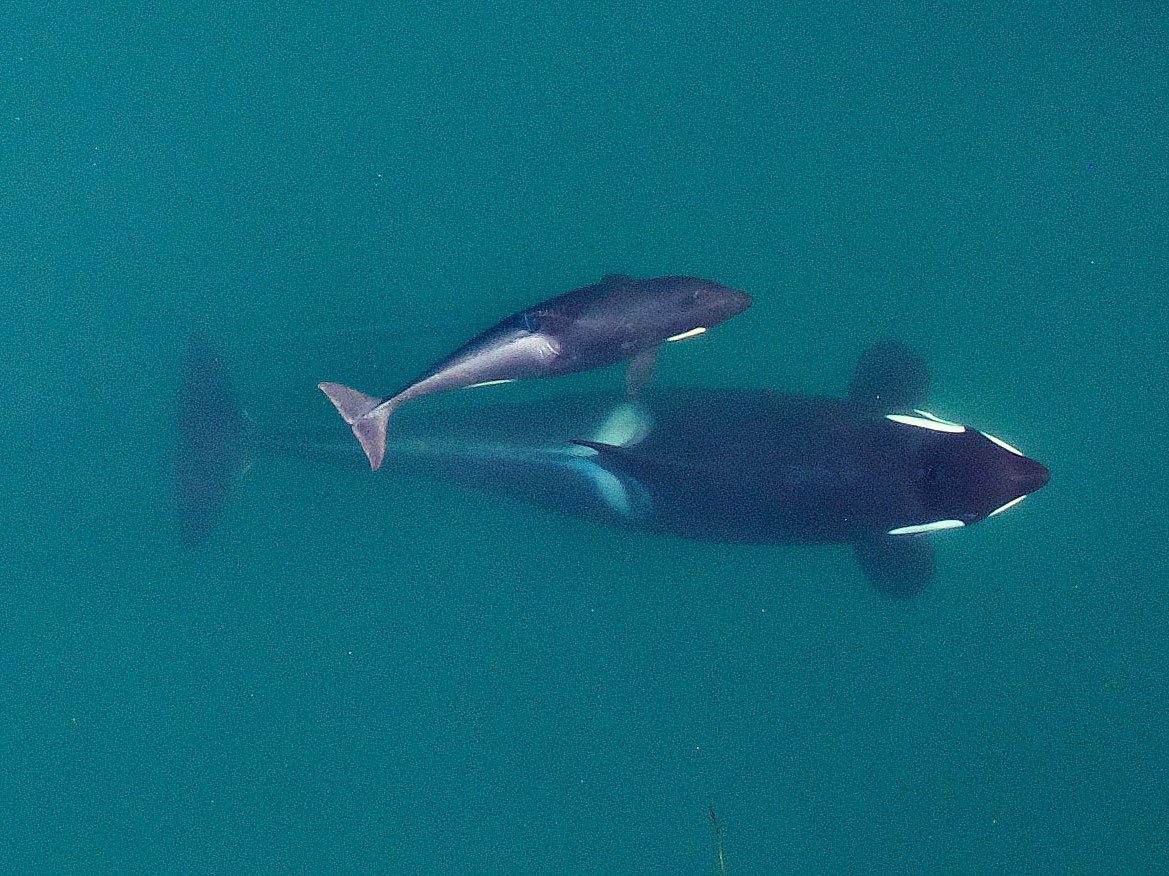 Past explanations for the Southern Resident’s sky-high abortion rate have included stress from dozens of whale-watching boats that encircle the orcas during tourist season, as well as poisoning from industrial chemicals. Wasser’s team found no correlation between ship traffic and miscarriage, but it was a different story for toxins.

Persistent pollutants like DDT and flame retardants get into the water and are passed up the food chain, where they’re eventually locked away in orcas’ blubber. Well-fed whales have little to fear, but starving Southern Residents must burn their fat stores to survive. Wasser found that burning blubber releases stored toxins and drives up miscarriage rates.

Southern Residents are among the most endangered whales in the United States. There are now only 78 whales left, including just 30 adult females. The sex ratio of calves is skewed 5-1 in favor of males, Wasser said, which may be a worrying sign of inbreeding.

“Projections are that in a little more than a decade, they’re going to be down to 60,” Wasser said. “We’re about to lose these guys.”

Dammed if you do

Southern Residents almost exclusively dine on Chinook salmon. These fish are the largest salmon species and also the most threatened. In the Fraser and Columbia rivers — the two biggest remaining sources of salmon for Southern Residents — Chinook are at just a sliver of their historical abundance. In British Columbia and the Pacific Northwest, more than 50 native stocks of this species have already gone extinct.

Both Wasser and Enticknap agreed that the only way to prevent Southern Resident killer whale extinction is to restore Chinook salmon abundance. But politicians, tribes, dam operators, fishermen, loggers and farmers can’t agree how to restore the salmon.  They’ve clashed over the particulars of restoration since the first Chinook populations were declared endangered in the early 1990s. Some say fishing needs to be curtailed. Others advocate for habitat restoration or rearing baby Chinook in captivity.

Many scientists agree that dams on the rivers where Chinook reproduce are a prime threat. Some dams are totally impassable, blocking fish from thousands of miles of historic spawning grounds. Even those equipped with fish-friendly improvements, like spillways and ladders to let salmon though, can be deadly. Dams create reservoirs that harbor once-rare predators that gobble up baby salmon. And the slow-moving waters above and below a dam can get hot enough to kill adults and juveniles alike.

In the past few decades, four dams on the Snake River in Washington have drawn particular ire from conservationists. These dams hurt adult salmon migrating up the Snake and, according to one estimate, claim 50 to 90 percent of juveniles heading downstream. They also cost taxpayers far more money than they generate, a 2016 economic analysis found.

To bring back Southern Residents, Enticknap said these dams need to go: “From my perspective, it’s the number one action we can take to recover spring Chinook.” These fish, which migrate up the Columbia and Snake rivers in the spring, are the last big meal Southern Residents can find before summer Chinook peak in August.

There may be a glimmer of hope on the horizon. A new partnership of government officials, farmers, tribes, fishers and environmental organizations including Oceana is developing sweeping recovery goals for Columbia River Basin salmon over the next two years.

Enticknap urged Congress and United States government agencies to take “quick and bold action” to recover Chinook salmon.  “Ideally, this would have happened 10 years ago,” he said. “The orcas need relief now.”