Ever heard of a murre? If you love eating salmon, you should know this bird

If you’re like me, you’ve got a lot to consider while baking a salmon dinner: How much time does it need in the oven? Who’s coming over? And where is the wine, again? Somehow in all that thinking, seabirds don’t flock to mind. Most of us don’t look at the fish in our cast-iron pan, and think of murres, diving for dinner off the California coast. We don’t think, either, of the rockfish and anchovies that murres dive for, as they cruise kelp forests from Baja to the Gulf of Alaska. But maybe we should.

Seabirds, anchovies, rockfish and salmon are all connected. On the Pacific coast, murres hunt all three fish. Booms and busts in one population can send shockwaves through another. By studying these connections, managers can keep the fishery stable, and help it adapt to the effects of climate change. The salmon in your pan depends on a whole web of life that most of us never consider. 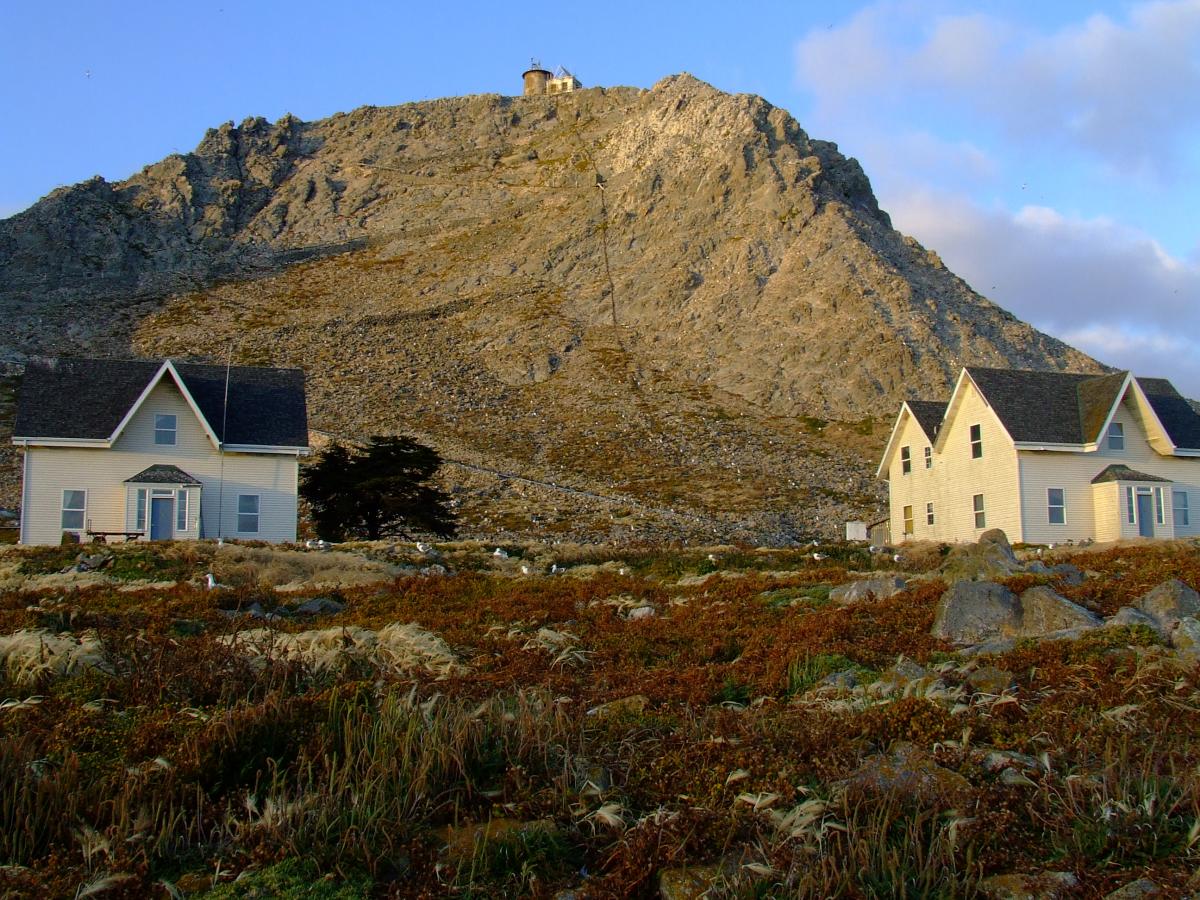 Murres are noisy, social birds that crowd shoulder-to-shoulder on the rocky Farallons. Females lay one egg a year, directly onto the rocks. The egg is oblong to keep it from rolling away, speckled, and ranges in color from white to deep blue. “Most tend to be a nice turquoise in color,” said wildlife biologist Gerry McChesney, who leads the Common Murre Restoration Project for the U.S. Fish and Wildlife Service. The birds always have something going on, he said. On the Farallons, “it’s a constant din of murres talking back and forth. They can be preening their neighbor one moment, and half an hour later in some battle,” he said. “What happened, who said what, I have no idea.”

Every summer, high on a hill above one of the birds’ breeding colonies, Warzybok watches murres through binoculars. He can spot any fish hanging from the birds’ bills as they fly back to the island from hunting trips to sea. When the ocean is cold and nutrient-rich, Warzybok sees a lot of rockfish through his binoculars. They’re abundant, and swim close to the islands: convenient prey for a busy parent bird.

But rockfish are scarce when the ocean is warm and nutrient-poor. Then murres fly further from the island, to the coast, where they dive for anchovies. Young salmon live in the same places, and the birds sometimes catch them too.

“Think about it like this,” Warzybok said, “you have a grocery store a block from your house, but they’re closed on the weekend. Now you have to go across town to get what you need.” It’s the same for the birds. Rockfish is the neighborhood option. Sometimes it’s unavailable. Then murres trek for the next best thing. 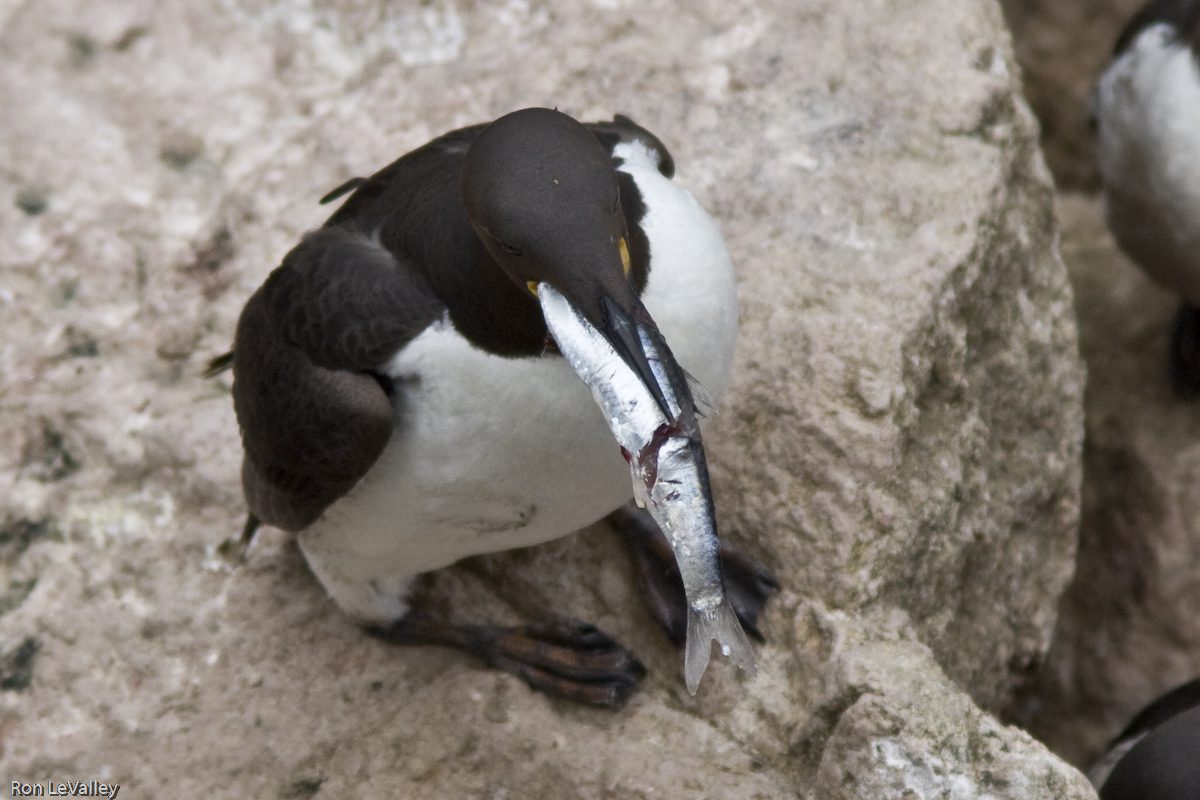 Hungry murres can eat a lot of salmon. These birds aren’t the only ones.

Dozens of predators — including sea lions and other seabirds — may also eat salmon when rockfish are scarce, said fisheries researcher Brian Wells with the National Marine Fisheries Service in Santa Cruz, California. All those mouths combined, he said, could make a big dent in salmon numbers.

Wells teased apart the relationship between murres, rockfish, anchovy and salmon in a recent study. Understanding who eats who, and when, could inform fisheries in the future, he said. Imagine what will happen as climate change makes the ocean less predictable year-to-year. Rockfish populations will boom and bust more often, and salmon numbers will be harder to predict as a result.

We need strategies to compensate for that variability, Wells said. The better scientists understand how predators and prey interact, the better fisheries can anticipate what’s coming, and work to keep salmon numbers stable through environmental change.

Salmon stability is good for fishermen, consumers and anyone who pays taxes in the United States. It has rippling benefits reaching all the way to your cast-iron pan. In 2008, the West Coast salmon population crashed. Commercial and sport fisheries closed off California and Oregon. For commercial fishermen in California, millions of dollars were at stake. Congress appropriated $67 million to restore the Pacific salmon population in 2008, and another $80 million from 2009 to ‘11. In short, it was expensive.

Keeping salmon populations stable through smart management is the way forward, Wells said. “As a fisherman or cook,” he explained, “it allows us to foresee longer term, and have faith we can invest in salmon.” That way, there will be enough fish for people, and for the birds. 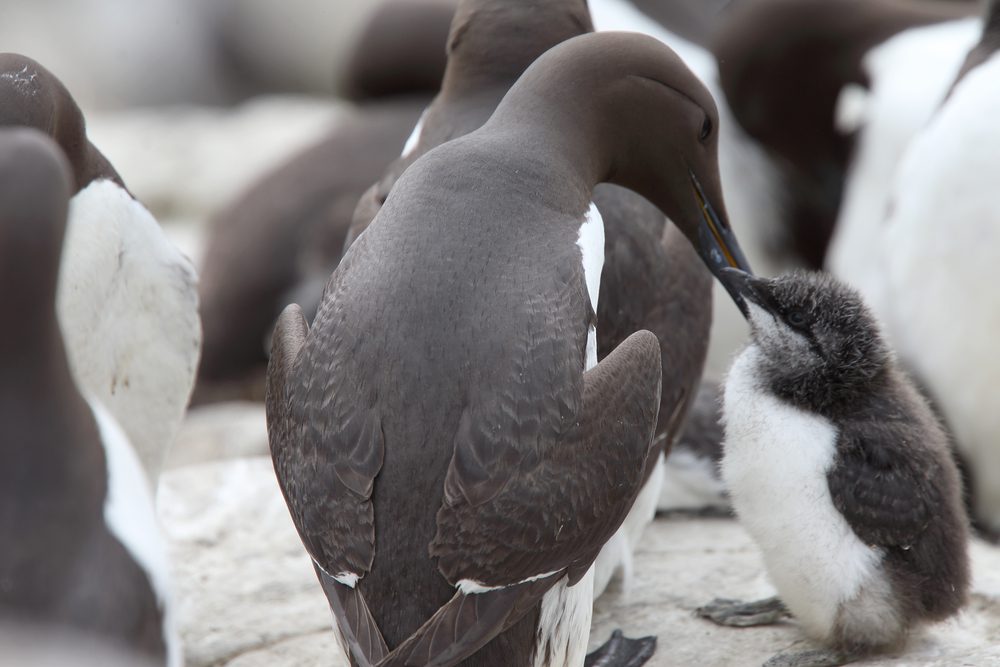