An endless wave of sardines swarmed around us, moving as one to avoid circling predators. Hungry mackerel and tuna swooped in like dive-bombers. In an instant, dozens of hapless sardines were gone. 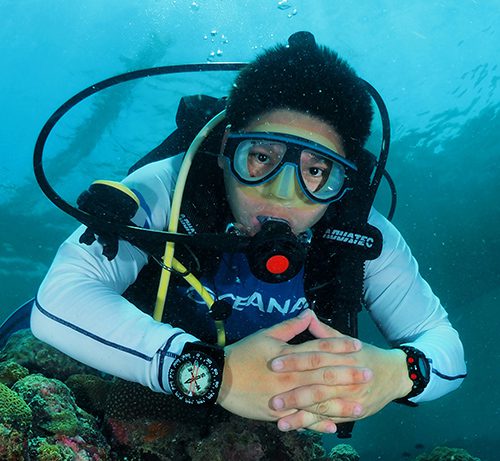 To get a closer look at these underappreciated fish, underwater photographer Danny Ocampo and I had traveled to Tañon Strait, one of the Philippines’ largest marine protected areas. We were diving off Moalboal, a peninsula known for its “sardine run,” where millions of sardines aggregate just meters from shore.

We watched the school swoosh past, floating silver scales all that remained of the departed. Sardines are a vital source of protein and income for tens of thousands of Filipinos, but their future is threatened by overfishing and ineffective laws. It’s clear that sardine schools can withstand dive-bombing mackerel. But can they withstand us?

When I ask people about sardines, the fish are usually equated with popular brands like 555 and Ligo. But what do sardines actually look like? Surprisingly, most people don’t know. When they peel open sardine cans, they see faceless fish swimming in sauce, heads and tails already chopped off.

Alive, sardines are fascinating creatures. These bullet-shaped fish cruise the world’s oceans in vast swarms. In Africa, individual sardine schools can be 7 kilometers long and nearly 2 kilometers wide. Sardines form the building blocks of the marine food chain. They gorge on wafting clouds of zooplankton, and are in turn eaten by larger marine predators like mackerel, tuna and sharks.

The Philippines commercially harvests six sardine species. Though small in size, their economic contribution is anything but tiny. In 2015, the country netted 345,000 metric tons of sardines, amounting to PHP 7.43 billion (USD $142 million) — proving that the industry is a major economic driver for many provinces.

Thousands of Filipinos are employed as fishers, traders or factory workers in the canning, fish drying and bottling sectors. In Zamboanga, a province in the southern part of the country, the sardine sector alone employs over 30,000 people.

Though the production trend for sardines appears to be on the rise since 2000, some local stocks are showing signs of overfishing. Mature fish don’t grow as big as they used to, and catch rates are dwindling for commercial ring-netters. Despite the sheer size of sardine shoals, they aren’t limitless. 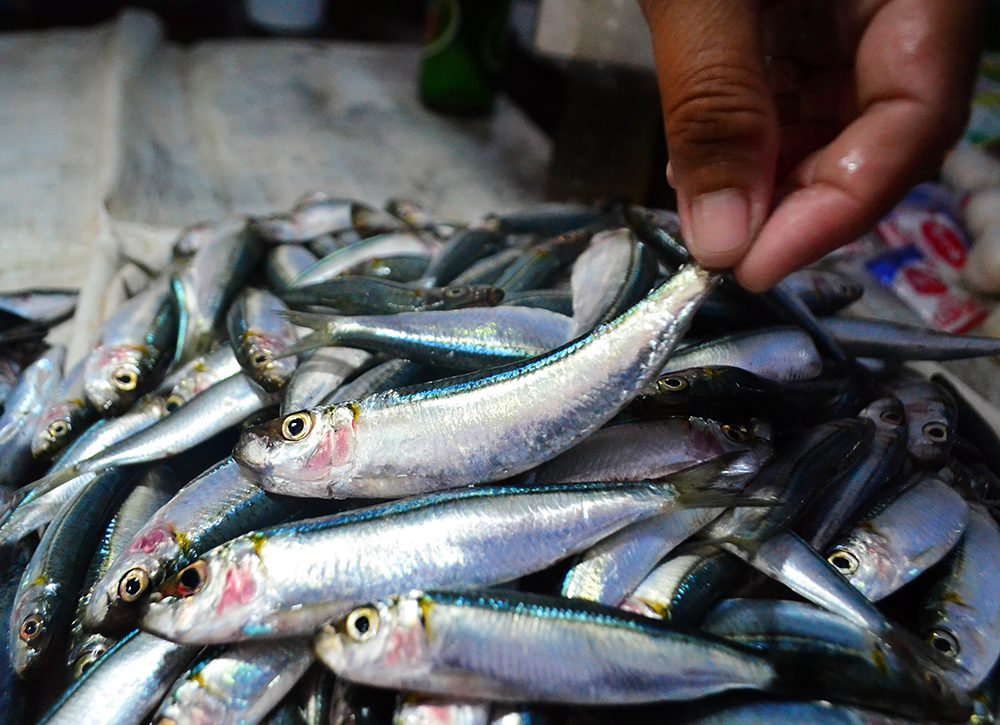 Armed with massive nets and tracking gear, commercial fishing vessels can make short work of sardine schools — even those as large as the ones in Moalboal. Without proper management, they may someday be overfished to the point of collapse.

“Given how important sardines are to our economy, we should ensure that our fisheries are well-managed,” said Jimely Flores, Oceana’s senior marine scientist in the Philippines. “We fully support the Bureau of Fisheries and Aquatic Resources in creating a science-based management framework for sardines.” 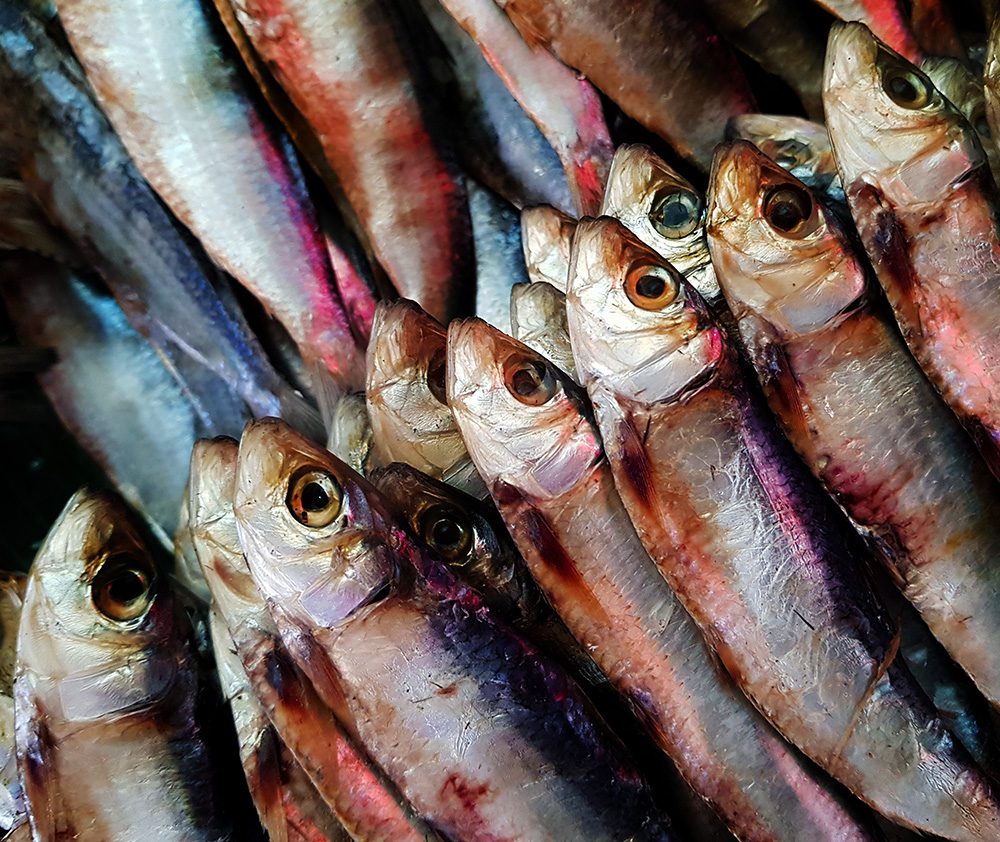 Over the past five years, officials have implemented temporary fishing bans during the sardine spawning season in the Visayan Sea, Tañon Strait and Zamboanga, which together produce 80 percent of the country’s output. But sardine reproduction is influenced by many factors. Closed season regulations are just one of many solutions needed.

“Reviewing quotas and minimum fish sizes, banning certain types of fishing gear and enhancing our closed season policies will allow our fish stocks to recover,” said Drusila Bayate, an assistant director at the Bureau of Fisheries and Aquatic Resources, or BFAR.

Moalboal and many other places in the country still harbor healthy reefs and immense shoals of sardines. “Now, this is the world we envision,” said Gloria Estenzo-Ramos, the head of Oceana in the Philippines. “Vibrant oceans teeming with life, able to feed Filipinos and act as bastions for biodiversity.”

As we neared the end of our dive, I took a closer look at the sardines. At first, they all looked similar, but soon some popped out. They were larger than others, or sported scars and bite marks.

These are the sardines we’ve been eating since we were kids — only this time, they’re no longer faceless. Alive, they flit gracefully, reflecting the azure iridescence of the sky above. They’re numerous, but individually they’re very vulnerable.

As Danny Ocampo, the photographer, signaled our ascent, I took a last look at the shoal. More mackerel swooped in, and the slowest sardines disappeared. With sound regulations, like BFAR’s sardine management plan, we can make sure vast schools like these don’t go the way of their unluckiest members. 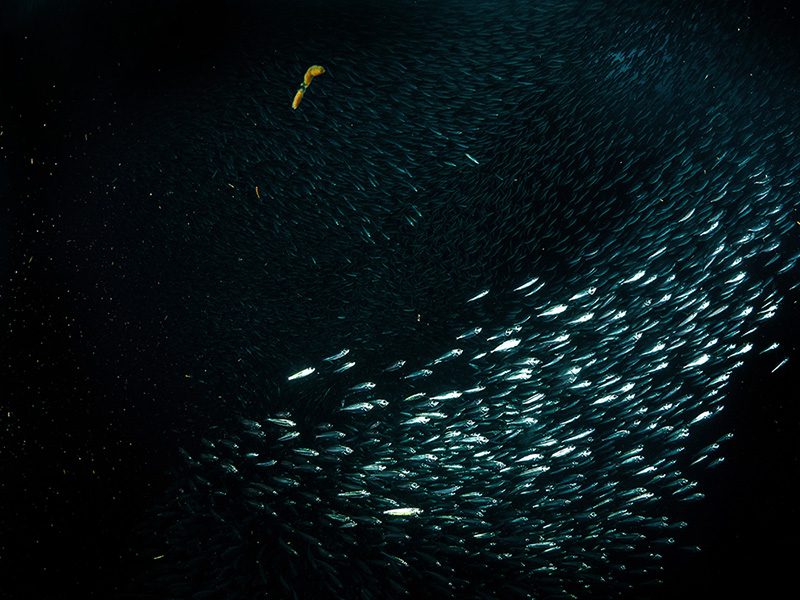