For a cold-blooded shark, Arctic seas must be an exercise in frustration. These icy waters teem with fatty fish and blubbery mammals, but the conditions are so frigid that a shark’s metabolism slows to a crawl. You can’t eat what you’re too slow to catch. But for the high-octane porbeagle shark, a catalog of anatomical tricks let it stay hot-blooded — literally — in water that could kill a human in minutes.

Porbeagles (Lamna nasus) are part of the lamnid family, a clan of sharks that include great whites and makos. Lamnids are named after Lamia, a queen-turned-demon from Greek mythology. As for the origin of the name ‘porbeagle,’ scholars have proposed various combinations of ‘port,’ ‘porpoise,’ and most obviously, ‘beagle’ — perhaps because the shark’s dogged hunting style calls to mind a hound chasing its quarry.

Porbeagles are like dogs in more than name. While hammerheads and other sinuous shark species are like maneuverable house cats, porbeagles are built like dogs, with rigid bodies that excel at endurance racing.

While there’s no data on porbeagle speed, the shortfin mako (Isurus oxyrinchus) — a close relative — has been clocked cruising at 32 kilometers per hour (20 miles per hour), and may be capable of short sprints at double that pace. Most sharks, by contrast, amble along at a few kilometers per hour. 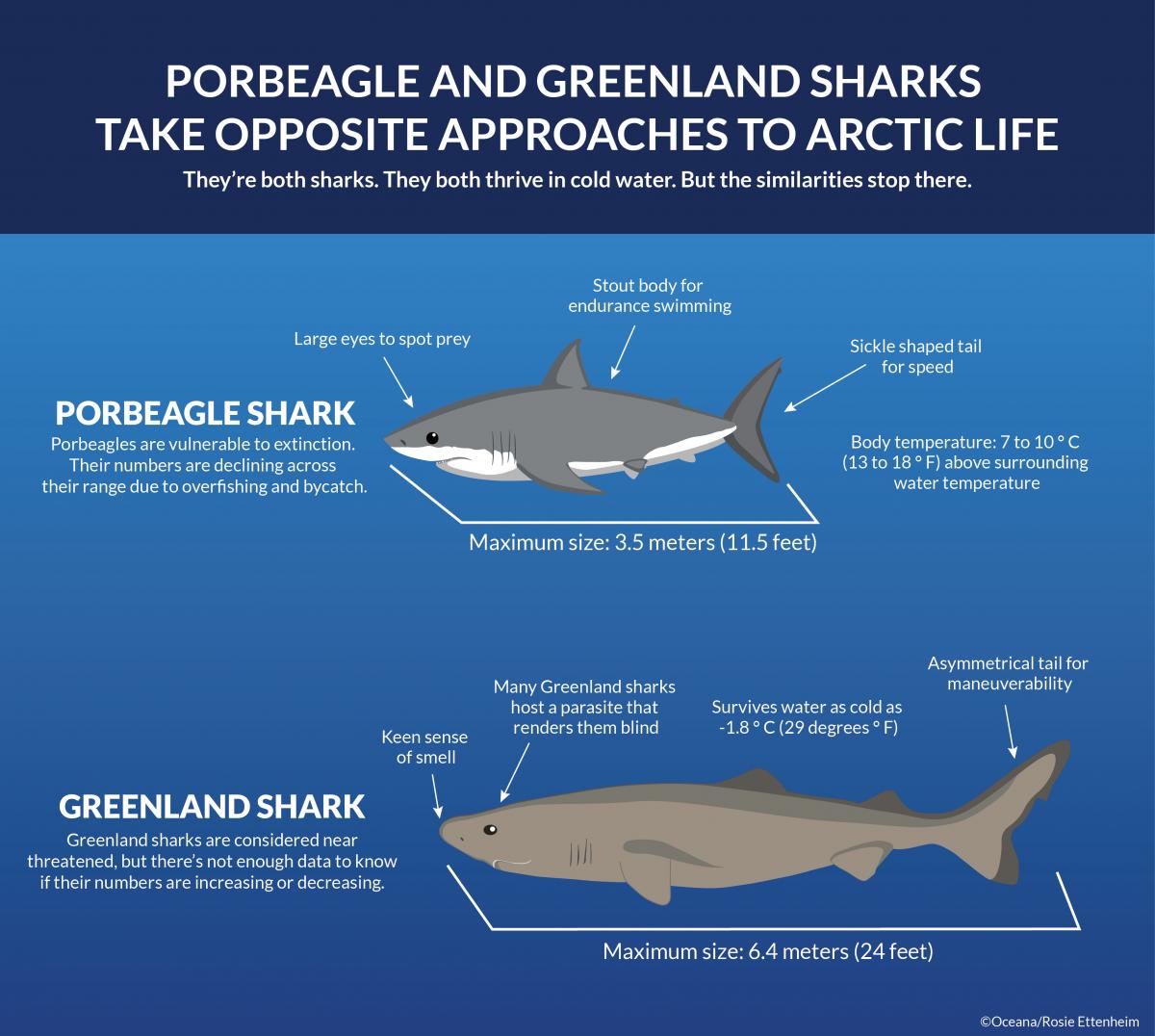 But the biggest trick porbeagles and their kin have up their sleeves is heat. Like tuna, these sharks have a system of blood vessels called the rete mirabile, or “miraculous net.” This arrangement lets the warm, outgoing blood from arteries heat up the cool, incoming blood from veins, and keeps porbeagles at a snug 7 to 10 degrees C (13 to 18 degrees F) above the surrounding water temperature.

This supercharged circulation also comes with a disproportionately big heart, high blood pressure and red blood cells able to carry a heavier load of oxygen — all traits that help porbeagles and tuna put the pedal to the metal. These similarities are made all the more remarkable by the fact that these species are separated by 400 million years of evolution.

A toasty core temperature is a major boon in chilly water — the hotter the body, the faster the fish. As one of the most cold-tolerant of open-ocean sharks, porbeagles have a major advantage over their cold-blooded competitors.

Not all nets are miraculous, however. Around the world, porbeagle numbers have plummeted due to overfishing and unintentional capture in fishing gear meant for other species. In some parts of their range, their numbers have dropped by close to 90 percent. Though CITES regulates trade in porbeagles, international conservation groups are warning that we need to do more to protect these shark speedsters from commerical and recreational fishing.

Tomorrow: The Greenland shark has figured out its own solution to Arctic life — though in a polar opposite way.