Look, down in the sea! It’s an advanced scientific instrument! No, it’s a pregnant virgin! Actually, it’s a shark. With their beady eyes and toothy jaws it might be easy to label sharks as the villains of the ocean, but sharks have so many amazing abilities we think they’re better cast as heroes. Read on to discover five weird and wonderful shark powers that would put Superman to shame. 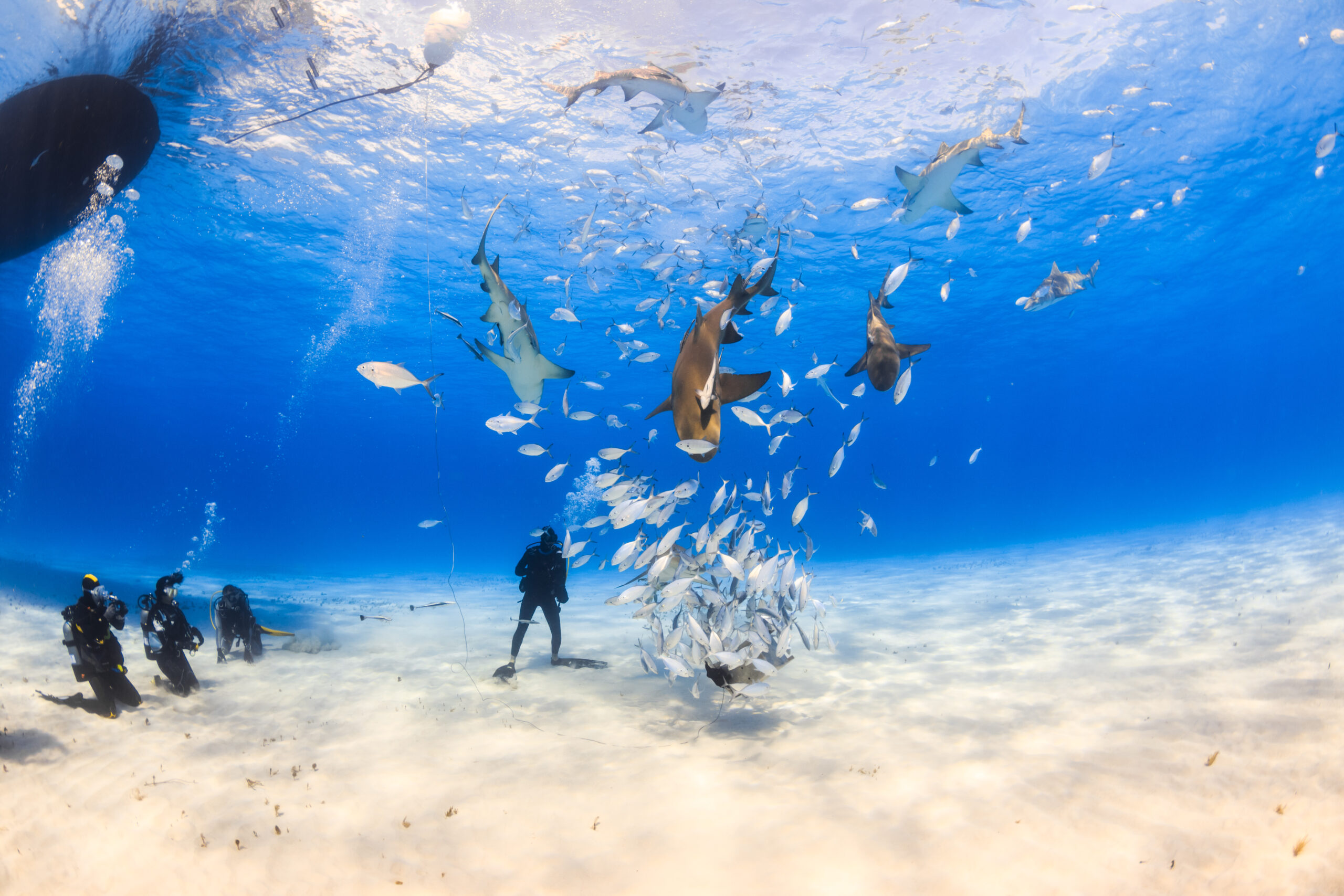 While it’s a total myth that sharks can smell a drop of blood from a mile away, there is one thing that a shark can detect from miles away: electricity. Sharks are so sensitive to electrical fields they rival the accuracy of some scientific instruments.

If you look at a shark’s snout up close, you’ll see dozens of pinprick holes that look like the whisker bumps on a dog’s muzzle. These dimples aren’t for whiskers, but for “ampullae of Lorenzini,” a network of jelly-filled pores that can sense extraordinarily weak electrical fields — on the order of about a billionth of a volt per meter.

Remember those grade-school experiments where you rubbed a sweater on a balloon to get a spark of static electricity? Theoretically, a shark could detect the electrical field coming off that balloon’s surface from several miles away, though it’s more likely sharks use this sense to hone in on prey from meters, not miles.

As nifty as this power is, why do sharks need it? It turns out that all living creatures create a slight electrical field when their muscles contract or their neurons fire. On land, this charge has nowhere to go, as air is a very poor conductor of electricity. By contrast, seawater is filled with sodium and chlorine ions that make the ocean a fantastic conductor.

Sharks might not be able to smell your fear, but they can probably “feel” it — from the muscles in your pounding heart. 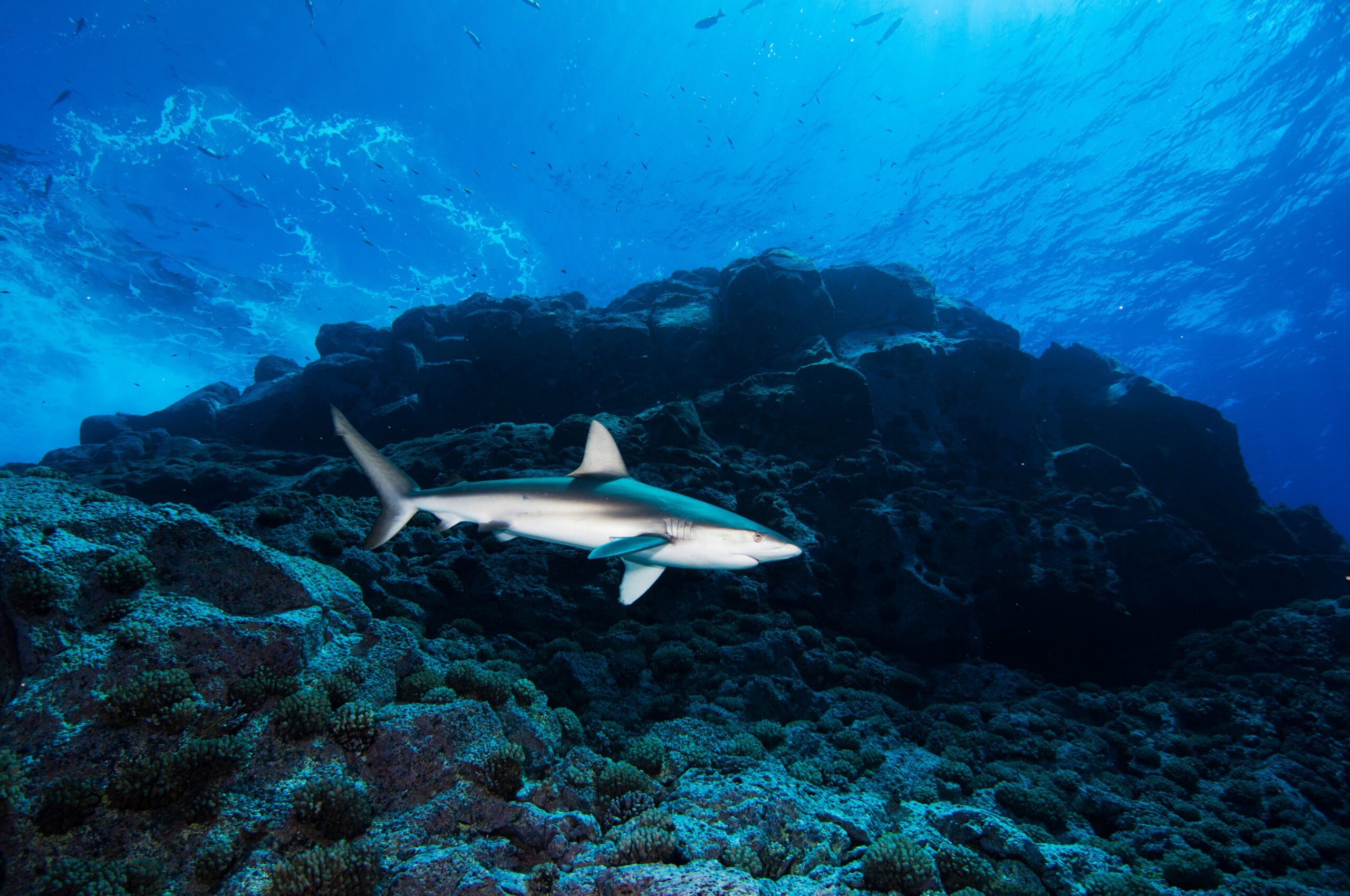 Several species of sharks can swim in straight lines for miles and can accurately navigate to points far from home, even in the dead of night.  How do they manage to do this without a GPS strapped to their snouts?

Scientists were initially puzzled by this superpower, but noticed that the straight lines that sharks follow align with the earth’s magnetic field. But unlike other animals with a “compass sense,” sharks don’t have magnetic particles in their sensory organs.

One theory how sharks manage their navigational feats goes back to those wonderfully sensitive ampullae of Lorenzini. Like a motor that transforms a changing magnetic field into electricity, as a shark’s body moves through earth’s magnetic field it may generate an electric current that the ampullae can detect. 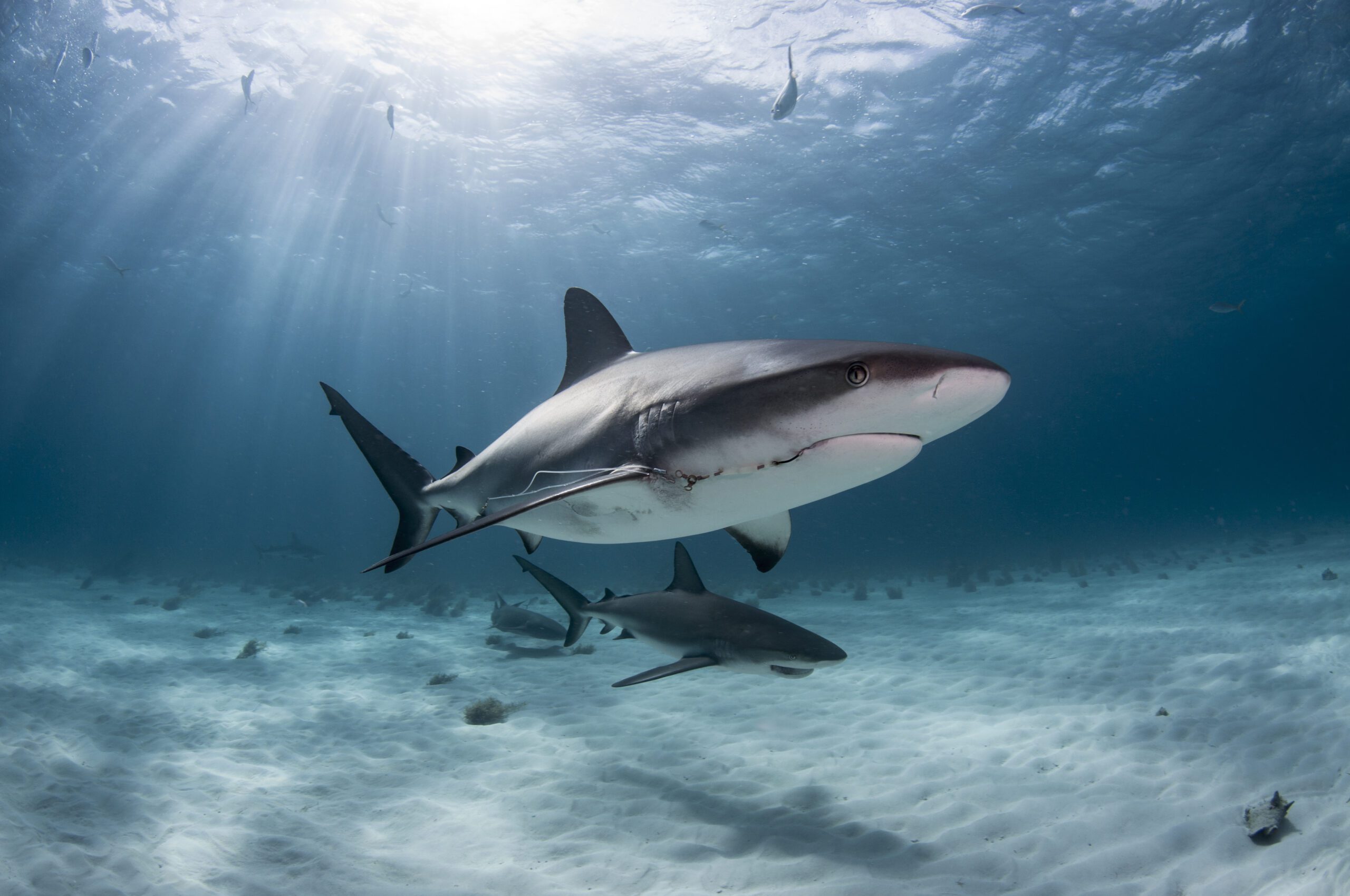 For some solitary shark species, mating opportunities are few and far between. These females have evolved a special power to make the most of their chance encounters with the opposite sex: they can store sperm for months on end. This lets females keep the sperm around for when they’re fertile, and also allows them to produce several litters from just one mating.

One captive female brownbanded bamboo shark proved the ultimate case of planned pregnancy. She held on to her mate’s sperm for three and a half years before deciding the time was right to finally reproduce — a world record in sperm storage.

Sometimes, a female shark feels her biological clock ticking but doesn’t have a male shark or stored sperm handy. This was the predicament facing Tidbit, a blacktip reef shark who died in 2008 at her tank in the Virginia Aquarium.

When aquarium staff performed a necropsy, they discovered that Tidbit was pregnant with a fetus that was a genetic clone of its mother. It turns out that Tidbit had taken matters into her own fins by undergoing “parthenogenesis.” Parthenogenesis lets species that normally reproduce sexually create offspring without any male input.

There are only a handful of other verified cases of parthenogenesis in sharks, including examples from hammerheads and sawfish, though anecdotal evidence suggests that females from many other species can make babies sans a dad.

As cool as this superpower is, it’s not always a good sign. Parthenogenesis is often a last-resort strategy when females can’t find males, as is the case with animals in captivity, or with endangered species where there simply aren’t enough males at all. 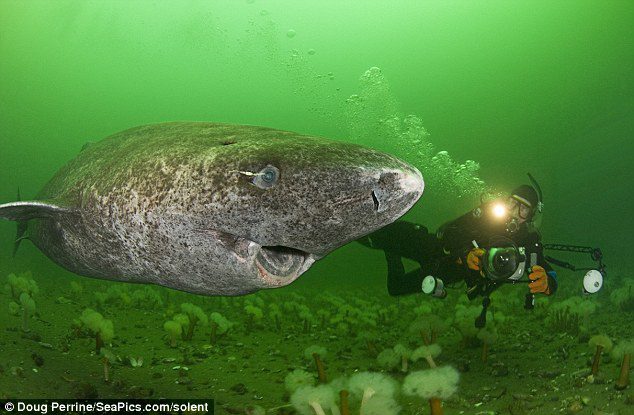 Greenland sharks swim at a top speed of 1.7 miles an hour, are full of natural antifreeze that makes their meat toxic, and, at 20 feet long, are almost as big as great whites. But that’s not the strangest thing about them. In some populations, 90% of all Greenland sharks are rendered blind or near-blind by a parasite that feeds off their retinas.

Despite being sluggish and sightless, Greenland sharks appear to do just fine. They’ll scavenge just about anything that’s already dead, including moose, reindeer and polar bears. Strangely enough, they’re also a major predator of living seals.

How can a blind, slow predator catch such speedy prey? Greenland sharks may be taking advantage of the fact that seals have a far scarier predator to worry about: the polar bear.

In areas with polar bears, seals often take to sleeping in the ocean for safety. Researchers theorize that Greenland sharks sneak up on the dozing seals, ninja-like, for an easy snack. 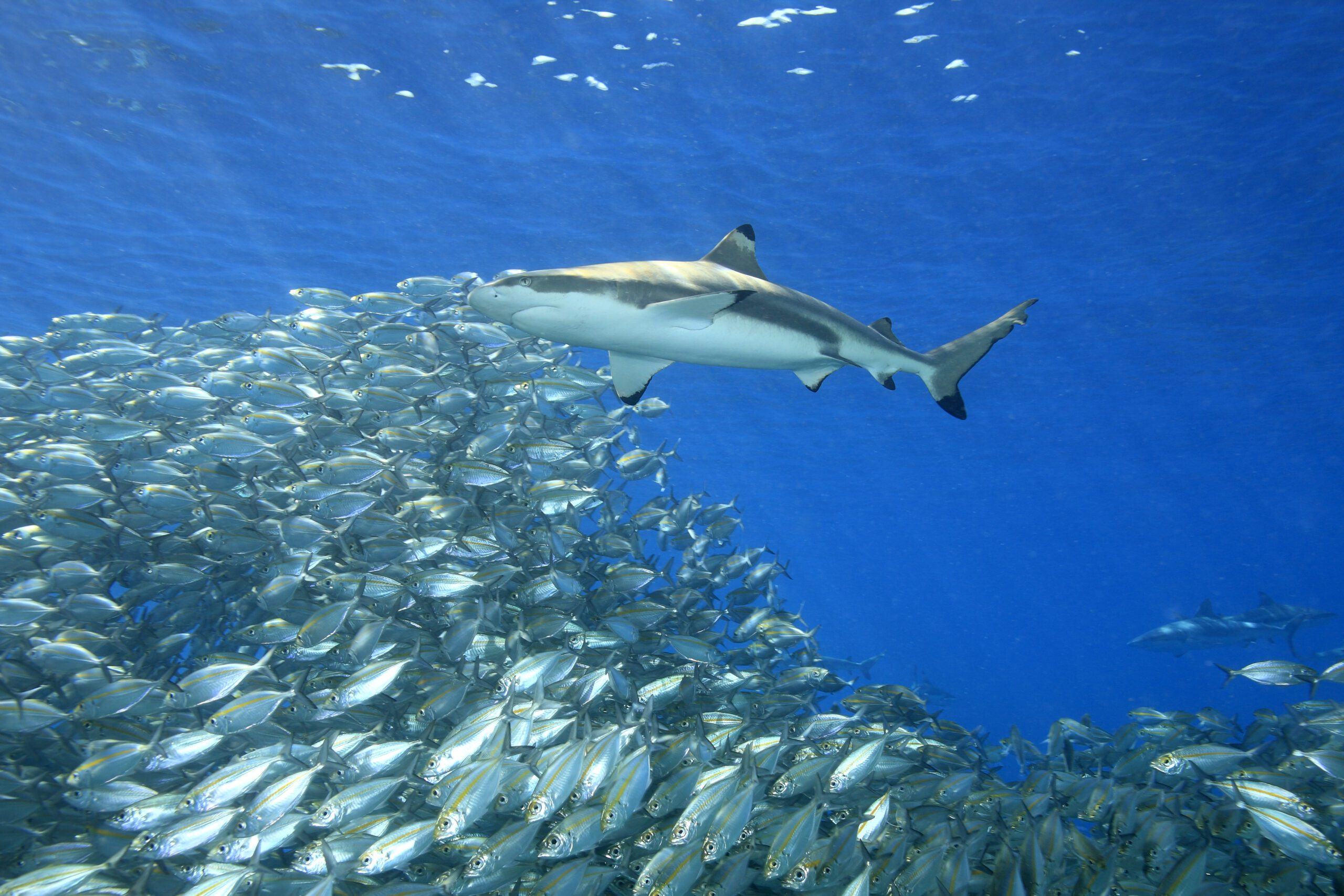 It may seem counterintuitive, but sharks actually increase the number and diversity of animals in the sea, and improve the health of habitats like coral reefs and oyster beds.

The reason why sharks are the stewards of the sea has something to do with a theory called “mesopredator suppression.”

Big sharks like great whites, bull sharks and hammerheads are known as apex predators, meaning that they’re at the top of the ocean’s food chain. Mesopredators —or “middle predators” — are those that both eat other animals and are eaten by them. Big, aggressive apex predators harass and stress out mesopredators, and, on top of that, often make a meal of them. This has the roundabout effect of making life much easier for the mesopredator’s main prey species, who don’t have to constantly live in terror of becoming dinner.

This theory has been borne out by some evidence from the field. On coral reefs where sharks have been overfished, the populations of mesopredators increase. With no sharks to keep their numbers in check, smaller predatory fish pig out on herbivorous species — most importantly, parrotfish. Parrotfish and other herbivores are particularly vital for reef health, since they keep living corals clear of the algae that would otherwise smother them. 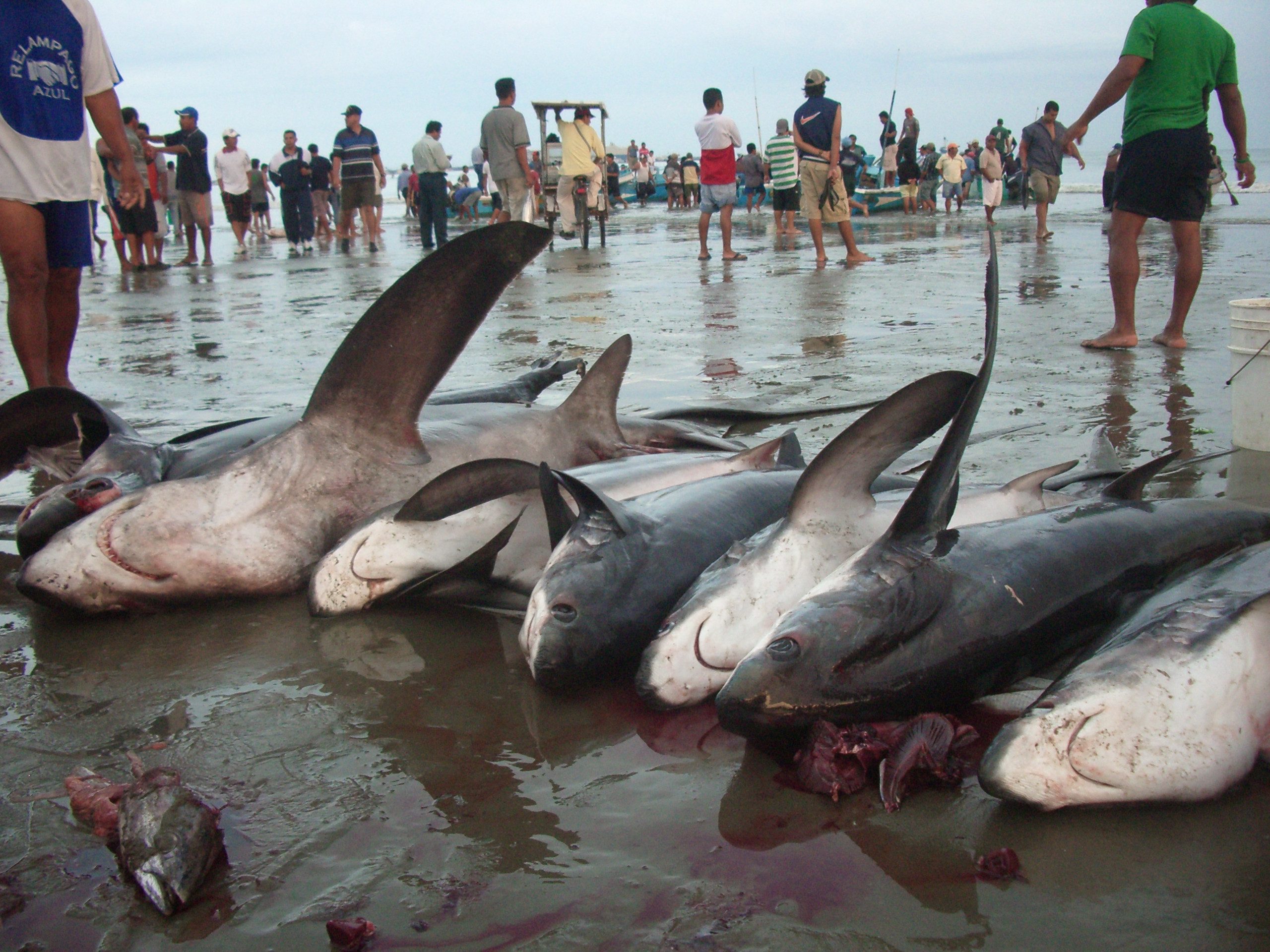 For all their amazing powers, sharks are no match for their biggest adversary ever: us. Every year, 73 million sharks are stripped of their fins for shark fin soup, and are dumped back into the ocean — often alive. At the same time, indiscriminate fishing gear and irresposible fishing practices catch and kill millions of additional sharks.