These days, Paul Sieswerda, the director of Gotham Whale, often finds himself bobbing in the waters off Brooklyn trying to record the sound of flatulent fish.

When Sieswerda retired from his 21 year tenure as a curator at the New York Aquarium, he planned to sit under a tree and write a book. But in 2010, Seiswerda got a giant surprise: New York’s long-absent whales started showing up again.

Those plans for a book and a tree were put on the backburner. Now, Sieswerda and his organization are trying to find out if the gas fish pass might hold secrets to better protecting New York’s newest giants from the dangers of city life.

These blubbery behemoths are likely returning to the Big Apple as Atlantic menhaden, the whales’ favored prey, are rebounding thanks to stricter fishing rules. In 2011, Seiswerda’s organization tallied five whales. In 2015, they counted 69. Most are humpbacks, with some fin, sperm and blue whales sprinkled in.

But how do the whales know menhaden are back? They can’t smell their prey or see it in the city’s murky waters. Nor can they echolocate like sperm whales or dolphins. Sieswerda and his “merry band of volunteers” are trying to find out whether humpbacks can use their exquisite hearing to hone in on the sounds of menhaden schools — namely, their toots.

Some ‘bait’ fish like herring emit streams of bubbles from their anuses to confuse attacking predators. Gotham Whale is sponsoring the first physiological study of menhaden since 1920 in part to understand if these fish are capable of ‘farting’ like their relatives.

To understand the East Coast’s whales, you have to understand Atlantic menhaden. These fish, a schooling species that grows up to a foot long, are so oily they’re essentially nuggets of fat and protein with fins attached. Their pungent flavor has won them few fans among human diners. But nearly everything else in the ocean eats them with gusto. 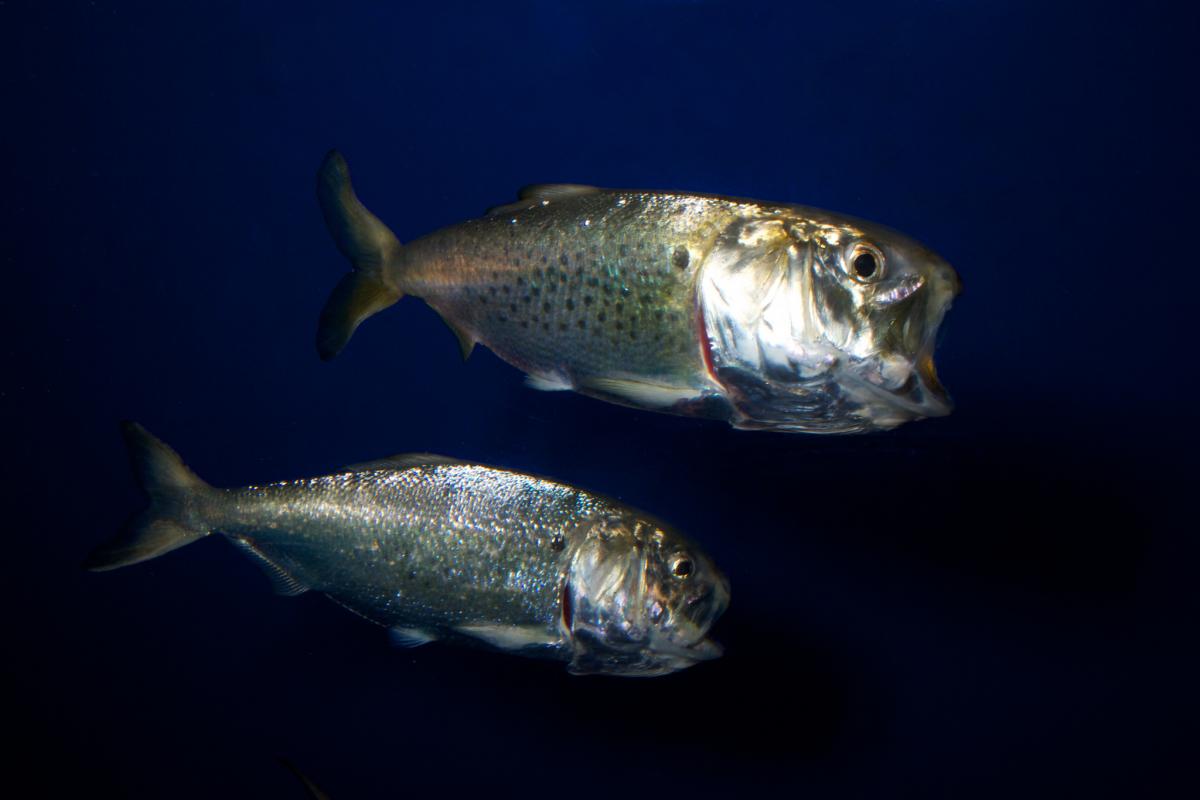 Atlantic menhaden were once so plentiful that single school could stretch 40 miles long, 2 miles wide and 18 feet deep — a Great Wall made of fish, not stone. But after a century and a half of uncontrolled fishing, these vast shoals have vanished.

Today, menhaden still make up the biggest single-species fishery on the East Coast. In 2015, 143,500 metric tons of menhaden were caught by commercial fishermen — a huge amount, but one that pales in comparison to the all-time high of 712,100 metric tons in 1956. A single company, Omega Protein, owns 80 percent of the menhaden catch — which it then ‘reduces’ into livestock and aquaculture feeds and fish oil supplements.

Though menhaden are not technically overfished by the government’s definition, their numbers represent only a sliver of their historic abundance, said Elizabeth Brown-Hornstein, a research scientist at The Safina Center.

Because of this, menhaden now play a bit part in the coastal symphony they once conducted. The missing menhaden have been blamed for starving osprey chicks, diseased striped bass, oxygen-deprived ‘dead zones’ in the Chesapeake Bay — and the absence of baleen whales from spots like New York where they were once common.

In 2012, members of the Atlantic States Marine Fisheries Commission voted to reduce annual menhaden landings by 20 percent — the first law to limit the Atlantic menhaden catch in the 150-plus years of the commercial fishery. This decision left an estimated 300 million more menhaden in the ocean the following year.

“That was a big success,” Brown-Hornstein explained, as it was the first decision to consider the needs of the predators that eat menhaden — as well as the commercial, recreational and tourism industries that rely on these predators.

Initial observations suggest that menhaden are bouncing back, even if big concerns remain about low numbers of juvenile fish. Recreational fishers and other folks out on the water are “seeing more schools of menhaden and larger schools of menhaden,” Brown-Hornstein said. “The catch limit seems to be working.”

As both Brown-Hornstein and Sieswerda suspect, multiplying menhaden are what’s summoning humpback whales back to the New York Bight — a square of ocean bordered on one side by Long Island and New Jersey on the other, with Manhattan in the upper left corner.

As more migrating giants stop to refuel in the Bight, Sieswerda worries that whale-ship collisions will ramp up. New York and New Jersey harbors are some of the busiest in the world. Last year, nine dead whales washed up on Long Island, their wounds consistent with fatal ship encounters.

“Unfortunately, evidence of ship strike is not very common because most carcasses will sink or get washed offshore,” said Asha de Vos, a marine biologist who has studied the risks ships pose to whales. “That said, off California they’ve shown that for every whale documented to have been killed by ship strike at least 10 others have gone undocumented.”

The roar of container ships and other vessels is another headache for hungry whales. “It would be like having a picnic on a landing strip for a major airport,” Sieswerda said. “Could you focus on your food consumption if jet noise was drowning out your conversation?”

Sieswerda hopes that by understanding the noises that menhaden make, and how ships can mask that noise, Gotham Whale and its partners can help to better protect feeding humpbacks.

While most whales come to New York for the noisy menhaden, at least one seems to enjoy gentler melodies. Jerry, a humpback, was first spotted when Gotham Whale’s photographer was listening to a Jerry Garcia album aboard his boat The Ship of Fools. The Deadhead whale spy-hopped in front of the Empire State building, letting the photographer, Artie Raslich, nab an instantly iconic photo.

Jerry may be proof that menhaden management works — and that Grateful Dead fandom knows no bounds.