On a sweltering summer day in South Florida, biologist Jessica Pate stands on the bow of her 26-foot center-console boat. She’s holding a rope to keep her balance, while her research assistant drives. Pate is on the lookout for manta rays swimming along the coast, and standing gives her the best vantage point. A few hundred yards away, she spots a jet-black shape gliding just beneath the surface.

Kevin is a young giant manta ray, just 8 feet in width. The tip of his left fin is missing, likely severed by a boat, which makes him easily recognizable. Kevin is one of 31 individuals Pate’s seen off the Florida coast, as part of a new research project documenting the state’s manta rays. They’re one mysterious population in a globally mysterious species, which faces mounting threats from people.

As an adult, Kevin’s wingspan could reach up to 23 feet. Giant manta rays, like him, are the world’s largest ray species and inhabit warm tropical and subtropical waters around the globe.

Big as they are, manta rays and their relatives, the devil rays, still aren’t safe. They are threatened by overfishing for use in Chinese medicine and by fishing gear that accidentally kills the rays, but is meant to target more valuable commercial species. In Florida, Pate is also seeing injuries from recreational fishing gear and boat collisions.

Kevin, for instance, has deep wounds from two different boat strikes. Pate has seen aerial footage of boats driving right over the mantas. When she first met Kevin, a year ago, his left fin was intact.

Back then, her current work — the Florida Manta Project — was just getting started. Its goal is to answer basic questions about the behavior and biology of the rays off Florida’s east coast. By taking photos and recording mantas’ locations, Pate hopes to learn where the rays go, where they feed and their population size.

Understanding Florida’s mantas, like Kevin, may be a first step to protecting them. The population could be a previously undiscovered species, says marine biologist Andrea Marshall, the founding director of the Marine Megafauna Foundation. “The implications are huge,” Marshall says. “This would be the largest population of this new species in the world… It would warrant immediate protection.” 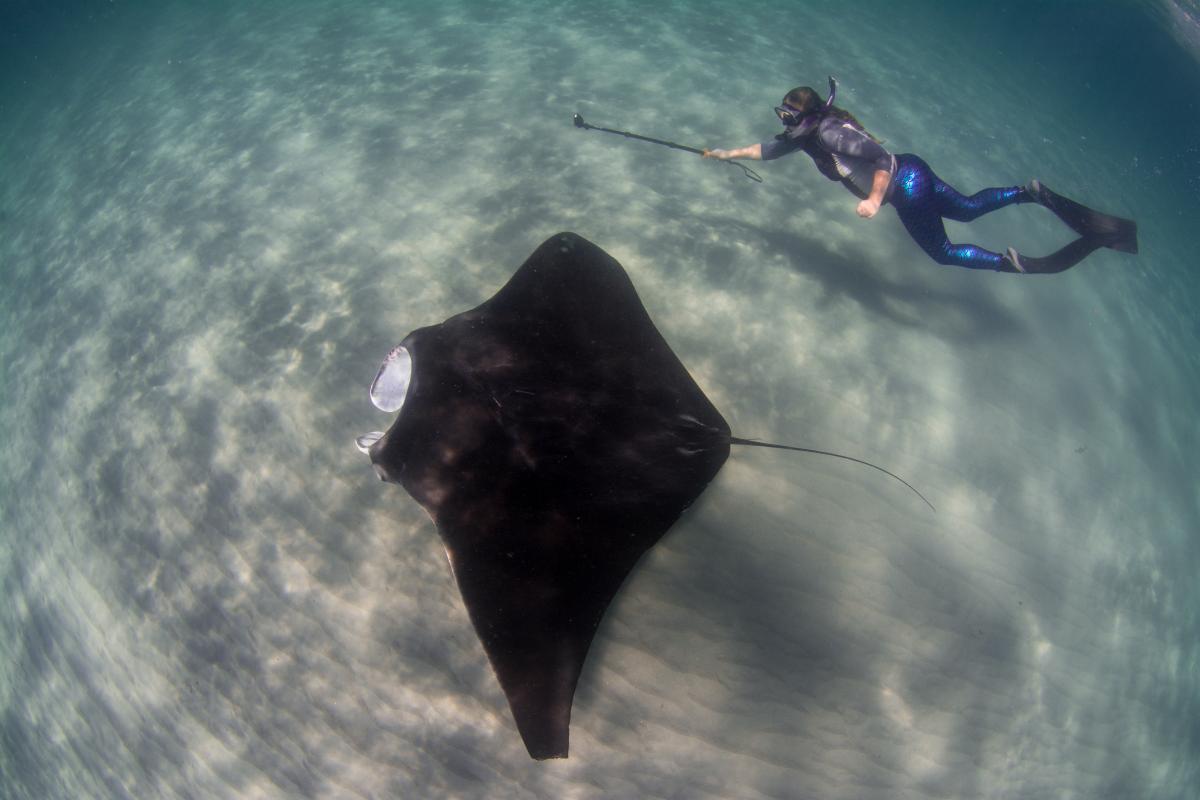 To find the graceful giants, Pate’s team goes out on a boat and motors along a 30 mile stretch of shoreline looking for black shapes at the surface. Once they spot a ray, someone gets ready with snorkel gear and a camera, then slips in the water. The first goal is to get a shot of the manta’s belly, because scientists can uniquely identify the rays by their spot patterns. The researchers also want to record if the animal is male or female, which can be challenging since these are young individuals, and the claspers — the paired reproductive organ on males — can be very hard to see.

“Photo-identification work is great because it’s a non-invasive way to get information on individuals,” says Matthew Ajemian, a shark and ray biologist at Harbor Branch Oceanographic Institute in Fort Pierce, Florida, who is not involved in the new project.

Pate is surprised that all 31 of the mantas she’s seen so far are young, and that she keeps bumping into the same individuals. Most of the time, they are alone and traveling, though she’s documented up to six feeding in an area at one time. She’s also surprised to find so many rays like Kevin — negatively impacted by human activity. About 40 percent of the individuals Pate’s seen are dragging fishing line or injured from boat strikes.

Whenever possible, Pate and her team try to cut fishing line trailing from the mantas, to prevent them from getting even more tangled up. It’s not easy and requires a good ability to hold your breath. The team has cut line from Kevin when he was hooked in his gills and had a plastic bag caught on the trailing line.

What’s also surprising, says Pate, is that the mantas let the biologists help them. She was with one animal, a young female named Stevie Nicks, removing fishing line and lead weights for more than 30 minutes. Rather than swimming away, Stevie Nicks circled beneath Pate, allowing her to repeatedly approach. Later in the summer, Pate found the same ray with new hooks, and again, attempted to remove them, though this time the hooks were dug in too deeply.

Mantas have the largest brains of any fish and are known to be intelligent, maybe even self-aware. Perhaps that’s why they let the biologists approach, Pate says. “They are fish, but fish can be smart. I think that’s important for people to know.”

Pate finds the rays in anywhere from 3 feet to 35 feet of water, but she’s limited to finding them visually and they can be hard to spot in deeper water. In the future, she hopes to add aerial surveys to her study and to tag the animals, which will give her a better handle on how far they are traveling and their daily and seasonal movement patterns.

At the end of summer, Pate saw Kevin again. This time, he was still free from fishing line and his boat injuries had nearly healed. “It’s good to see that they are healing so fast,” Pate says on the boat one day, after swimming with Kevin. “You can barely tell there’s a gash anymore. It’s amazing how quickly animals can recover.” 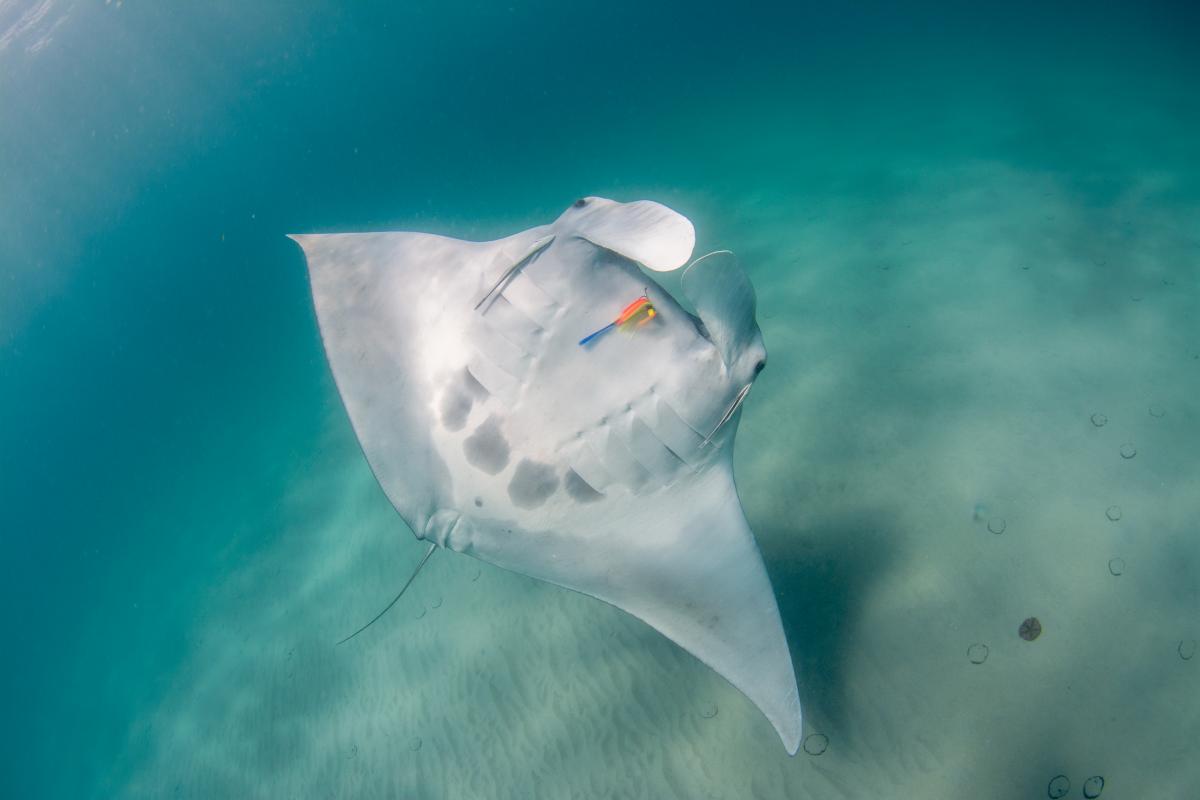