Jellyfish emerge as unlikely allies in the fight to end overfishing

Jellyfish get a bum rap as the “cockroaches of the sea.” They sting. They swarm. They have all the nutritional value of a wet cheese puff. And, in the popular imagination, a looming jellyfish armageddon is seen as the price we pay for decades of overfishing and pollution.

But rumors of a jelly invasion have been greatly exaggerated. Jellyfish populations are increasing in some places. They’re decreasing in others. And the formula that less fish means more jellyfish isn’t so cut-and-dried. Around the world, fresh discoveries suggest that jellyfish are key players in marine habitats, and that they can help us better manage food fish by acting as reliable indicators of ocean health.

Some scientists, like Robert Condon, a biological oceanographer at the University of North Carolina Wilmington, argue that jellyfish populations oscillate on 20 year waves that are independent of human activity. Others argue that jellyfish exhibit no global trends, but rather rise and fall according to a complex mix of local ocean conditions and interactions with fish and other animals — including humans.

“It doesn’t matter whether they’re increasing globally or not,” said William Graham, the director of the School of Ocean Science & Technology at the University of Southern Mississippi. “It matters within specific regions.”

But sources agreed that fears of a gelatinous apocalypse are overblown. “I’m on the wagon train that yes, jellyfish blooms are tending to increase,” said Kelly Robinson, an assistant professor in biology at the University of Louisiana. “But I don’t think it’s as dramatic as a jelly armageddon.”

Even if jellyfish swarms aren’t an existential threat to the ocean, a growing pile of evidence shows that jellies interact with fish in ways worth understanding.

Graham and an international team are wrapping up a project to uncover relationships between jellyfish and forage fish — small species like herring, anchovy or menhaden that are a staple food for a huge variety of animals from tuna to whales. The team has found that when jellies are abundant, forage fish tend to be sparse, and vice versa.

This finding suggests that jellyfish could act as a “barometer” of ecosystem health, Graham said. Too many jellyfish in the Gulf of Mexico, for instance, could indicate that fishers are scooping up too many menhaden, a forage fish that’s almost exclusively processed into fishmeal and oil. Or, because jellies eat fish eggs and larvae, a jellyfish bloom would mean that fisheries managers need to scale back catch quotas so menhaden have a chance to recover.

The problem, Robinson said, is that we’re still in the beginning of our understanding of where jellyfish fit in the ocean’s tangled webs of predators and prey. “Jellyfish, right now, tend to be ignored,” she said. “We’re starting to get a handle on the ecological interactions, and now we’re like: Okay, how do we turn this into a product that managers can effectively use?”

The long-held belief that jellyfish are ecologically worthless is in part to blame for their absence from fisheries modeling software and management decisions. While we know that leatherback sea turtles and ocean sunfish dine almost exclusively on jellies, scientists assumed that few other creatures would go through the bother of eating an entrée that’s about 95 percent water.

This assumption stems from the fact that jellies turn to unidentifiable “goo” in the stomachs of the creatures that eat them, Robinson said. But DNA sequencing is changing this. “What we’re finding is that a lot of things nibble on jellyfish opportunistically.”

In the Mediterranean, for example, a 2012 study found that jellies played a major role in the diets of bluefin tuna and swordfish. And in 2014, an experiment in the Norwegian deep sea showed that scavengers demolish dead jellyfish that sink down from the shallows. This study contradicted anecdotes that jellyfish are food only for microbes at these depths.

In light of these discoveries, the jellyfish reputation may deserve a makeover. “They’re treated as a symptom of a degraded ocean. I would argue that jellies are in fact symptoms of a very healthy ocean,” Condon said. “They’ve been around for 500 to 550 million years. They’ve stood the test of time.” 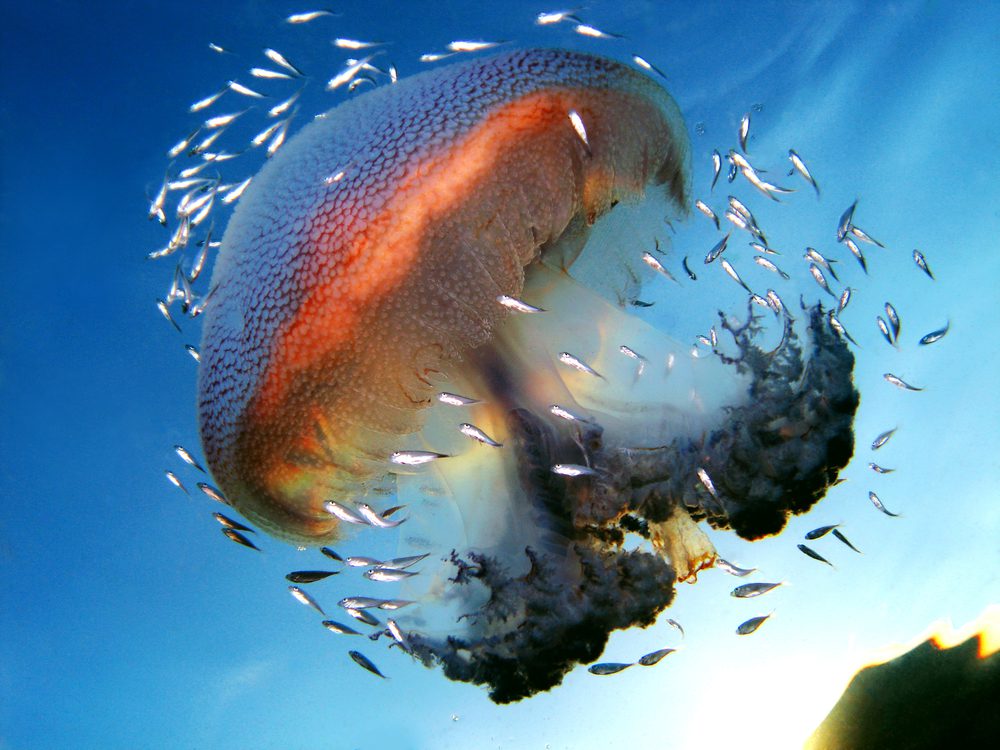