In Japan, dreary winter weather comes with a bright side: the start of snow crab season. Plastic crates of three-pound crabs stream through auction houses, luscious displays tempt buyers at markets, and diners tuck into crab sashimi or suck the meat straight from boiled legs.

Though it’s pricier than foreign imports, Japanese snow crab is at the top of the heap in terms of quality and sustainability — thanks in large part to the work of a single fishermen’s union in Kyoto Prefecture. There, more than a decade before government-imposed catch restrictions, local crabbers took matters into their own hands to coax these crustaceans back from collapse.

From 1964 to 1980, snow crab catches in the waters off Cape Kyogamisaki near Kyoto fell from 406 tons (369 metric tons) to 64 tons (58 metric tons). This overfishing was coupled with the accidental capture of huge numbers of immature crabs each year in the sole and flounder fisheries. The gear those fishers use, called a Danish seine, is a type of bottom trawl that can capture both fish and crustaceans.

In a good year, more than half the income for the members of the Kyoto Danish Seine Fishery Federation, the local fishermen’s union, can come from catching snow crab. In 1983, plummeting catches made it clear that the crabbers’ livelihoods stood to disappear along with the crabs. So the union partnered with a researcher from a nearby institution to protect several patches of the seafloor from bottom trawling.

At first, many crabbers vehemently opposed closing off any part of their traditional fishing grounds. As a compromise, small trial reserves were set aside between 1983 and 1987. As crabs returned en masse to these once-depleted areas, the fishermen’s reluctance turned into enthusiasm, and the Federation presented a unified push for larger and more extensive reserves. 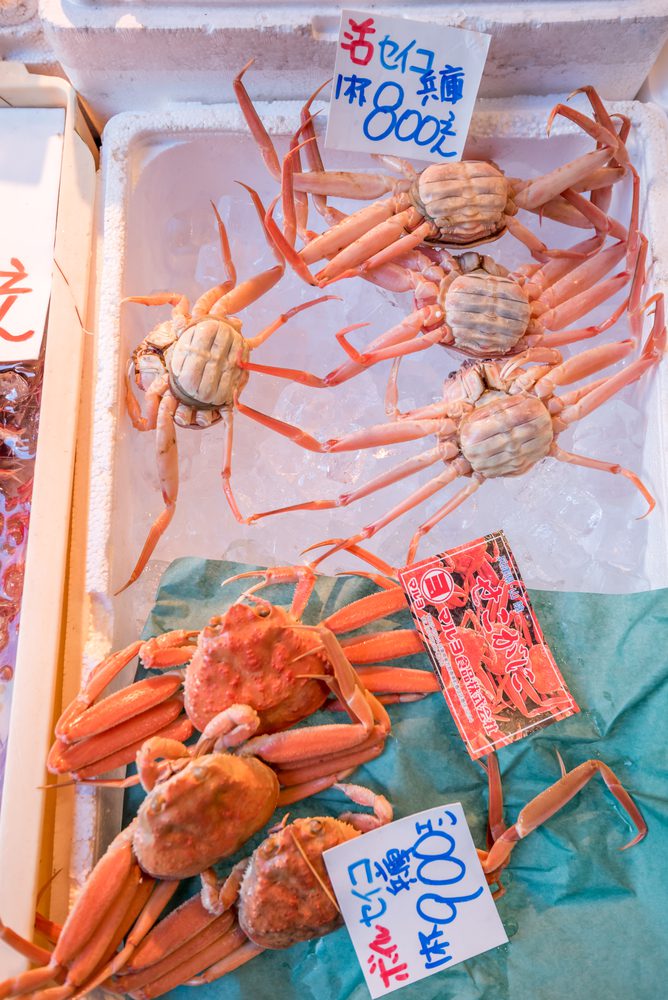 There are now six permanently protected no-take zones in critical crab habitats across 19 percent of the fishing ground. And these are no mere “paper parks.” With the help of government financing, the crabbers sunk enormous concrete blocks in the reserves to thwart illicit bottom trawling.

According to Mitsutaku Makino, a scientist at the National Research Institute of Fisheries Science in Yokohama, the fishing fleet’s small size — with a maximum of 15 vessels — and the “tight communications and trust between the researcher and the fishers” fostered consensus and success.

The Kyoto fishermen adopted other self-imposed measures including stricter seasonal limits on female and immature crabs, and gear that reduces crab bycatch in nets set for flounder and sole.

Government regulations specifically aimed at snow crab were not in place until 1997, when the government set hard limits on the total weight of crab that could be landed each year. The regulations also govern the total number of vessel licenses and the length of the fishing season.

Decades of consistent protection have paid off:  The average catch per boat rose from 199 pounds (54 kilograms) a day 1978-82 to 654 pounds (287 kilograms) 2001-05. Prices increased from around $28 per kilogram in 2000 to $40 per kilogram in 2009, in part because stricter management allowed more crabs to mature to their larger and more valuable hard-shell stage.

In 2008, the snow crab fishery was awarded a Marine Stewardship Council certification, a first for both Japan and Asia as a whole.

According to Makino, others are now following Kyoto’s lead. “Kyoto is definitely the pioneer in Japan,” he said, adding that neighboring areas are adopting similar strategies to manage their crab fisheries.

The biggest threat to Kyoto’s snow crabs, Makino said, is economic. Locally caught snow crabs face stiff competition from cheap Russian imports. Prices are not very good, he said, and the fishermen’s income is suffering as a result.

To distinguish their product from foreign imports, the crabbers in Kyoto Prefecture and many other ports across Japan now attach colorful plastic tags to their catch so consumers can easily see where a crab was caught.

Molly Zaleski, a marine scientist in Oceana’s Alaska office, praised the Kyoto fishery but offered a word of caution.

“One of the things I appreciated most is that they have these areas closed to trawling: these three meter concrete blocks say ‘we’re serious,’” she said. “But 10 years down the line, that doesn’t mean these areas are going to keep protecting snow crabs. Snow crab distribution is already shifting in the Bering Sea because of changing temperatures.”

Because the Arctic is warming at faster clip than almost anywhere else on earth, this shift may offer a preview of the future for Japan’s snow crab fishery.

Oceana works around the world to encourage the use of responsible fishing gear and science-based fisheries management. Learn more here, or donate today.