This Little Fish Could Help Fix Child Malnutrition in Peru. Why Is It Feeding Farmed Animals Instead?

Last year, Peru landed 2.7 million metric tons of anchovy — more than almost any other fishery on earth, and enough for the country’s 32 million inhabitants to each get tens of kilograms of these highly nutritious little fish. As a recent report in Fish and Fisheries argued, this abundant, affordable species could be a major help for Peru’s malnourished and anemic children. Instead, a web of perverse incentives means that 98 percent of the catch is processed into animal feed — making it next to impossible to find any anchoveta fit for human consumption.

Peruvian anchovies are packed with protein, healthy fats, vitamins and micronutrients like iron and zinc. This makes them an ideal food in a country where 14 percent of children under the age of five are malnourished. In some regions, that number can climb as high as 34 percent. According to the U.N.’s World Food Programme, childhood anemia has been on the rise since 2011, and 43 percent of children in Peru under the age of three currently suffer from this condition.

Anchoveta might seem tailor-made to help feed Peru’s malnourished children, but food-grade anchovies are vanishingly rare. “The supply to produce canned, frozen and preserved anchoveta for direct human consumption is very limited,” said Patricia Majluf, the director of Oceana Peru and the lead author of the report. “There are several factories that have closed because they don’t have the supply. People are looking for it in supermarkets, and they can’t find it.”

Most of the scarce quantity of food-grade, canned anchoveta is exported. And what’s sold in-country is too expensive or inaccessible for poor communities in the highlands or the Amazon rainforest.

As for fresh anchovies, many famous restaurants in Lima have tried but have been unable to include it on their menus. Majluf and her team had to abandon their on-the-ground push to introduce chefs, diners and home cooks to anchoveta. “You couldn’t find it in the supermarkets. You couldn’t find it in the wholesale markets,” Majluf said. “I couldn’t keep up the campaign without having the supply there.”

In the Fish and Fisheries report, Majluf and her co-authors argue that one of the main culprits behind Peru’s missing anchovies are two counterproductive fisheries rules. One law mandates that the industrial fleet’s huge anchoveta catch must be sent to ‘reduction’ factories to be processed into fishmeal and oil, most of which winds up as animal feed. A complimentary law, aimed at supplying food-grade anchovies for local markets, requires that artisanal fishers only catch anchoveta for direct human consumption. But in reality, most of the artisanal catch ends up as fishmeal, not as food. 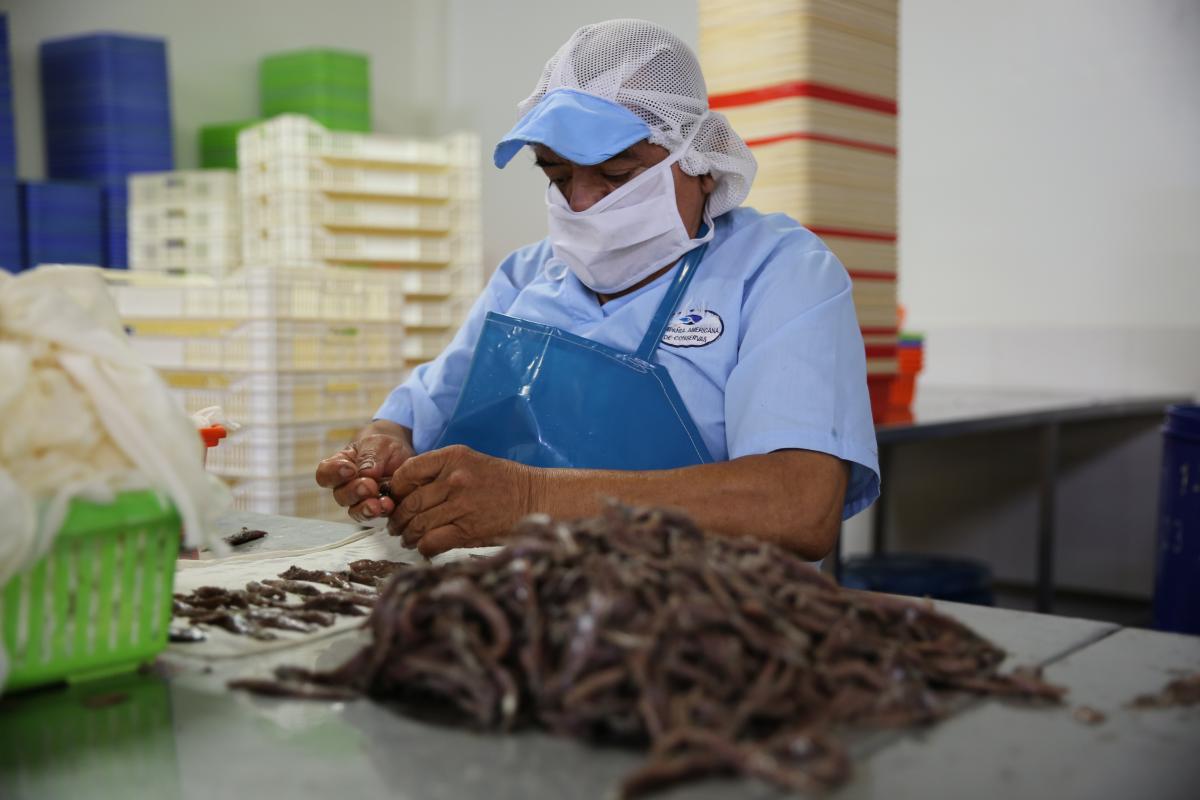 Many artisanal fishers are deterred by the cost of ice and sanitary certifications, and instead illegally deliver their catch to reduction factories — as even rotten, mangled anchoveta can be turned into meal and oil. At the same time, Majluf said, the industrial facilities that process food-grade anchovies would prefer to — but can’t — source fish from their own industrial ships. These ships have modern, chilled-seawater holds that keep their catch in peak condition.

According to Majluf, the supply problem can be solved by allowing the industrial fleet to catch anchovies for human consumption. In addition, new economic incentives and better enforcement of existing law could incentivize artisanal fishers to land anchoveta for food.

Majluf’s paper was released alongside a second report that found that of the 20 million metric tons of anchovies, herring, mackerel and other fish processed into fishmeal and oil each year, 90 percent are food-grade. “For decades,” Majluf said, “the industry has been saying these are not edible fish.” This argument has been used to justify feeding these species to farmed fish, shellfish, pigs and chickens. Instead, the study suggests, these fish represent an enormous, untapped food source.

According to industry officials, food-grade anchoveta are hard to find because there is no domestic demand for them.  A white paper on the International Fishmeal and Fish Oil Organization website argues that there is a “lack of markets for direct human consumption of small, bony fish” including anchoveta, and says that “local communities have preferences over their diet and will not generally consume products they find to be unpalatable.”

Archaeological evidence, however, indicates Peruvians have been enjoying anchoveta for at least 5,000 years. The ancient city of Caral, located 200 kilometers (120 miles) north of Lima, likely arose and prospered by consuming and trading vast quantities of Peruvian anchovies and sardines. Even now, communities in the Andes are receptive to small, dried fish. Anchoveta likely fell out of favor not because of taste, but after the industrialization of the fishery in the 1950s.

Majluf has worked with other researchers to develop anchovy-based convenience foods that do not require refrigeration, one of the major limiting factors when trying to reach villages in the Amazon forest or the Andean highlands. These include pouches of pre-cooked, skinned and boned anchovies — similar to canned tuna, a popular food in Peru — and whole dried fish, a common snack in East Asian countries.

To boost Peru’s supply of food-grade anchoveta, the main thing that needs to be changed is “one article in one law,” Majluf said. In the coming months, the Oceana Peru team is trying to do just that. “Next year is the review process for that law. It’s the time to go for that one article change.”