Ibiza is a party, even underwater.  The luxury island is a playground for celebrities and rare coral, according to a new study in the European Zoological Journal. 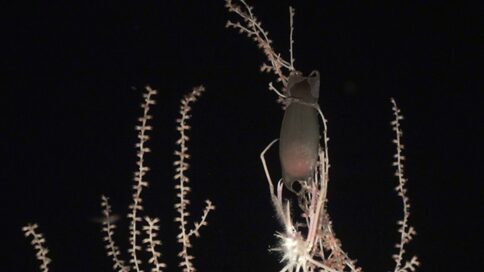 Researchers from Oceana, Italy’s University of Bari and the Spanish Institute of Oceanography discovered fields of critically endangered Isidella elongata coral hundreds of meters below the surface in the Mallorca Channel, which lies between two submarine mountains east of Ibiza. This is the largest patch of the coral now known in the Mediterranean. Its discovery could mean new legal protections for the species and channel.

“There were very dense, big colonies in healthy condition,” says Oceana marine scientist Silvia García, who was part of the expedition that found the coral fields. Fish and invertebrates use I. elongata to hide, hunt and breed, García explains. But, “it’s very endangered habitat.”

Sixty years ago, I. elongata was common. Also called bamboo coral for its plantlike appearance, the species grew in dense, tall stands, like a forest along the muddy bottom. That was then. Decades of irresponsible fishing have since devastated the population.

Beginning in the 1960s, weighted nets gained new popularity. Fishermen trawled these nets behind their boats, indiscriminately snagging shrimp, Norway lobster and coral too. The nets ripped most of the Mediterranean’s centuries-old, slow-growing and slow-recovering I. elongata colonies out of the seabed. Trawling is still common, and the corals haven’t bounced back.

Mallorca Channel’s Isidella escaped by accident, thanks to an electrical cable draped across the seafloor. Trawlers avoided the area to protect the cable and inadvertently spared the coral too.

And it’s not just bamboo coral they’ve spared. The channel is rich in other unique habitats like rhodolith algae beds, which support a diversity of marine creatures, and fields of deep-sea sponges. Three local seamounts create diverse conditions, fostering a unique blend of life. The new bamboo coral discovery is just one more reason to protect this special area says Pilar Marin, an Oceana marine science and policy expert based in Spain.

The finding also coincides with a new report from the International Union for Conservation of Nature, or IUCN, which assess the status of Mediterranean corals. It could strengthen the case for new legal protections in the area. The report is the first to evaluate I. elongata’s conservation status. It lists the coral as critically endangered: one step from extinction in the wild and the most endangered in the Mediterranean Sea. 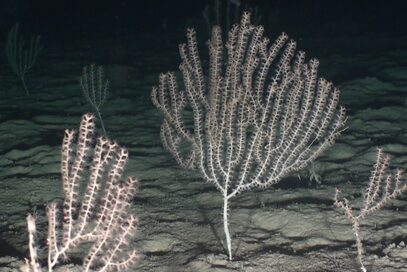 IUCN listing doesn’t guarantee that the channel’s I. elongata fields will be officially off-limits to trawling, but it makes protection much more likely, says marine ecologist Cova Orejas, who worked on the new report and studies deep-dwelling corals at the Spanish Institute of Oceanography in Mallorca. She was not involved in the discovery of the Isidella fields, however.

Ibiza and its neighbors in the Balearic archipelago are popular tourism destinations. Apart from the tourism economy and fishing, there are no other large industries, which can damage marine ecosystems. So, while “there are no pristine areas left in the Mediterranean,” Marin says, this channel is one bright spot in the sea. Adding I. elongata to its list of inhabitants is one more compelling reason to make the Mallorca channel a marine protected area, she adds. And since the coral also supports other undersea creatures, and is in steep decline, it deserves protection in its own right.

“If you find a place where this species is,” Marin says, “it should be protected.”