Behind the scenes at the California Academy of Sciences, baby potbellied seahorses roamed a tall, bubbling tank. They used their prehensile tails to cling to seagrass and to one another. The babies were small and slim as a finger, but as adults, they’d grow that eponymous potbelly, and wobble about, on display in the Academy’s Steinhart Aquarium in San Francisco.

When a keeper approached the tank, the youngsters rushed to the glass, then swam up to the surface, expecting a meal. These fish were living the good life.

They were the lucky ones.

Worldwide, seahorses are in trouble, threatened by habitat loss, and sold in a massive global trade. Scientists say this can’t go on, or seahorses will severely decline. But existing conservation efforts may not be enough to save them.

Researchers estimate that 37 million seahorses are taken from shallow, lush coastal waters every year, mostly ensnared by indiscriminate fishing gear. Southeast Asia and West Africa are the main regions exporting them. More than half of captured seahorses end up dead, dried and sold internationally for use in traditional medicines thought to boost virility and even cure impotence. A small percent are plunked into home aquariums, or sold as kitschy souvenirs.

Twelve seahorse species are listed as “vulnerable” by the International Union for the Conservation of Nature, one step down from endangered. An additional 17 species are understudied, and listed as “data deficient.” Two are endangered.

In 2002, an international treaty called the Convention on International Trade in Endangered Species of Wild Fauna and Flora, or CITES, responded to mounting concerns by tightening trade restrictions on all 44 species of seahorse. But scientists say that existing measures don’t go far enough.

In the decade after the restrictions took effect, tens of millions of seahorses still died worldwide because of nonselective fishing. Millions were still sold around the world. Between 2005 and 2015, the US imported roughly 140,000 live, wild-caught seahorses through Los Angeles, San Francisco and Seattle alone, according to U.S. Fish and Wildlife Service data obtained under a Freedom of Information Act request.

To make matters worse, many of the fishing methods to catch seahorses also destroy their habitats. Overfishing is just one part of a much larger issue. Despite legal protection, life keeps getting harder for these unusual fish. 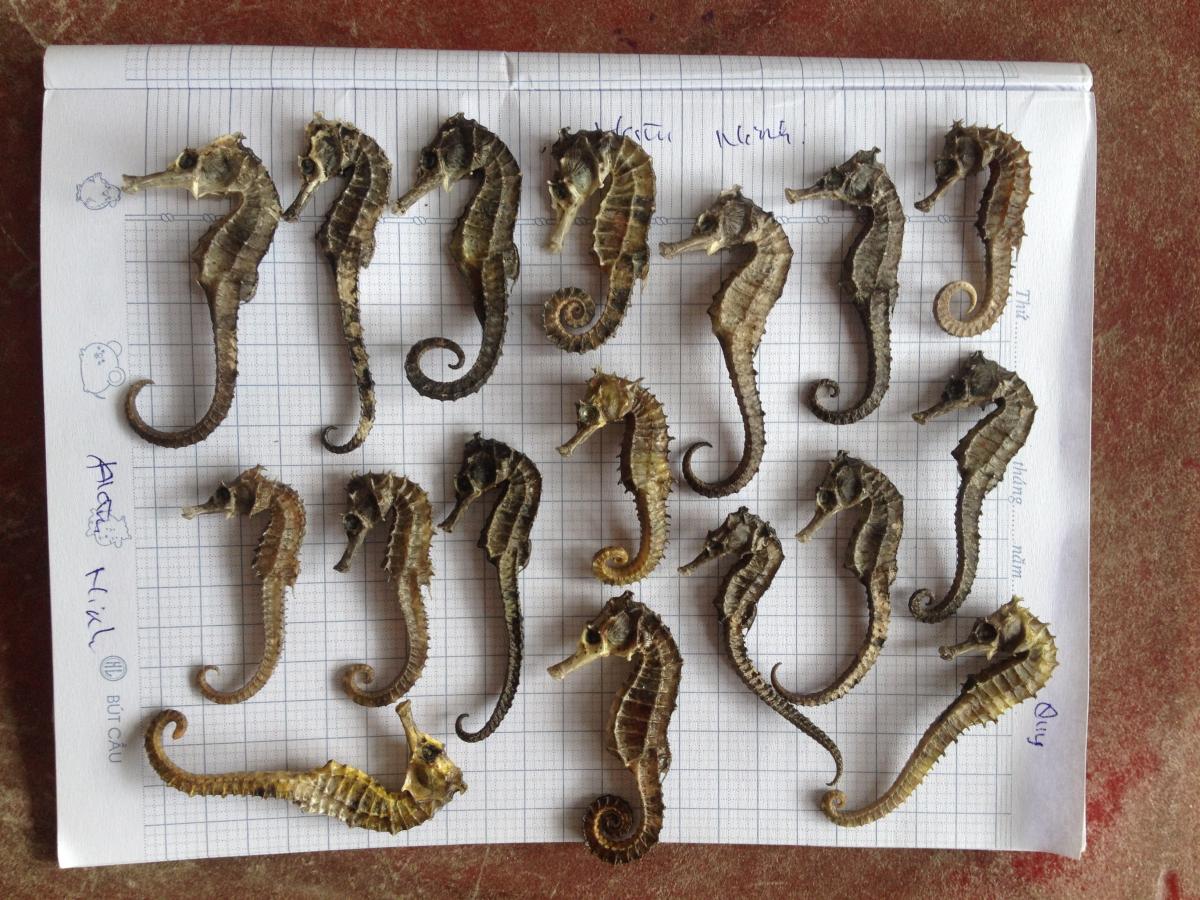 Victor Cheng leaned across his office desk, in a small business park, in San Jose, California. He poured over a thick Chinese medical encyclopedia, hunting for “hai ma,” or seahorse.

Cheng, a graduate of UC Berkeley and UCLA, practices traditional Chinese medicine in California, and at Shuguang Hospital in Shanghai. When he found “seahorse” in the encyclopedia, he translated the entry. The first records of their medical use appeared about 2,000 years ago, he read, in a Daoist tome, the Baopuzi. They are typically soaked in alcohol, or boiled as a tea, to ostensibly increase sperm count and activity.

While Chinese medicine has a two thousand-year history with seahorses, Cheng said that today, they “are far from commonly used herbs.” Seahorses are used recreationally and superstitiously, he said. “I don’t even think they stock them in major hospitals in China.”

That’s not to say that seahorse doesn’t work, Cheng added. But they are a folk remedy, like a supplement from a vitamin store. A doctor would prescribe something more potent, like seal’s penis, he said.

Despite the seahorse’s folk status, traditional medicine still fuels the majority of global demand. To understand why, consider the size of China’s population, and its health care system, Cheng said. China is home to more than one billion people. Imagine if just 1 percent bought a single seahorse every year. That would still add up to 14 million animals.

And folk remedies, while sometimes suspect, remain popular because health care is especially unpleasant in China. To make social services affordable, doctors are paid very little. “That doesn’t attract top talent to the industry,” Cheng said. Rather than visit a doctor they don’t trust, rural people head for prestigious (and crowded) urban hospitals, to see a physician with a good reputation, he said. They can wait in long lines for hours, even sleeping on the floor, before being seen. Locally available treatments, like seahorses, are an appealing alternative.

But medical demand isn’t the whole story. The problem is much bigger, researchers say. Because, it turns out, most seahorses aren’t caught on purpose. 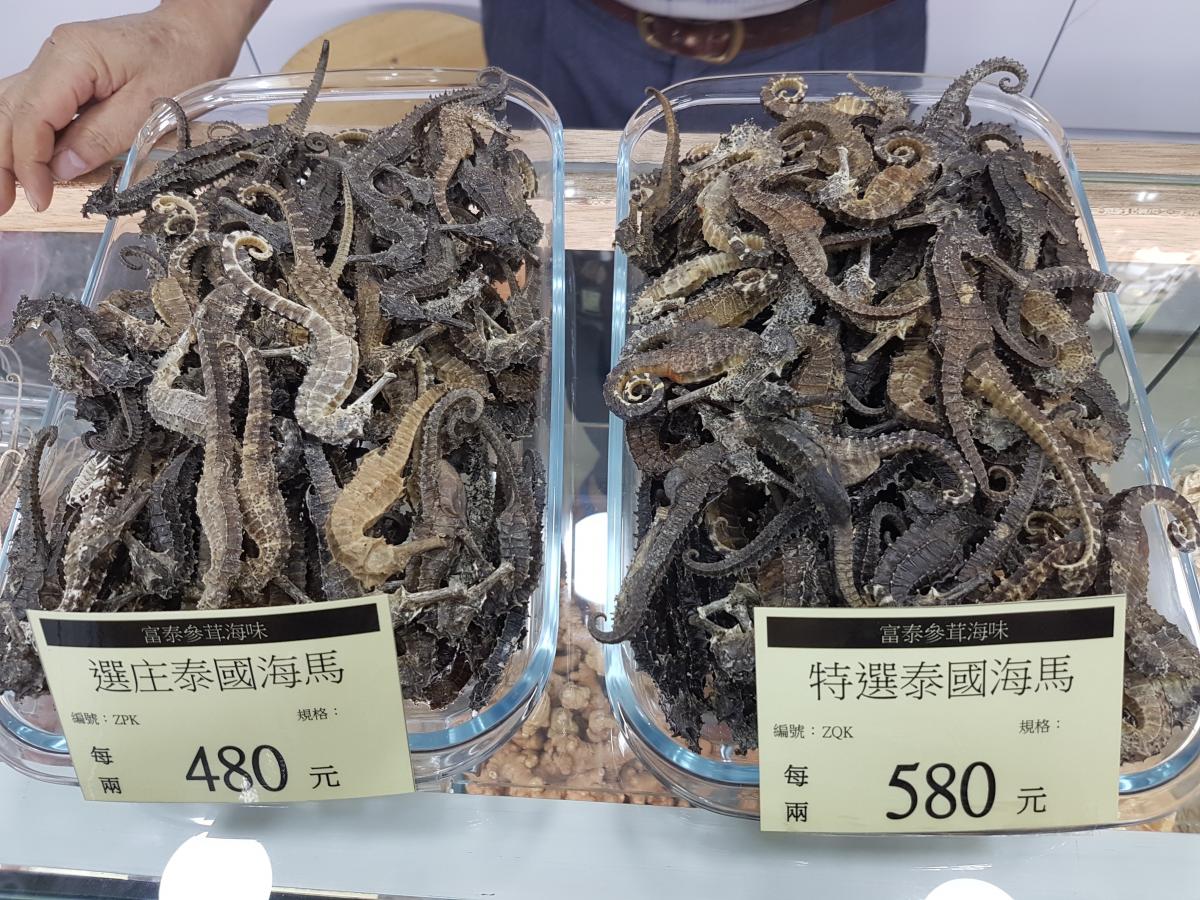 Most fishermen don’t set out to supply the traditional medicine market. They snare seahorses accidentally, using indiscriminate trawl nets, gill nets and crab traps, while angling for other creatures, said marine scientist Sarah Foster of the conservation group Project Seahorse. Bycatch would be thrown away as trash fish if not for medicinal demand.

“So even if we weren’t using seahorses, they would still be caught and killed,” Foster said. That makes it unfair to blame traditional medicine for seahorse declines, she added. “It’s the overexploitation by non-selective fishing gear that’s the problem.”

Bycatch hurts seahorses both directly and indirectly: It kills millions a year, while destructive fishing gear damages their habitat by mangling fragile ecosystems, Foster said. The weighted trawl nets that snag these fish also rip up the seabed, along with the grasses, rocks and corals that seahorses cling to.

Perhaps most insidiously, bycatch keeps wild seahorses cheap — at least for now. Fishermen can sell them for very little. They’d otherwise be thrown away, after all. Prices are marked up as seahorses move from local ports to distributors, and into herbal shops worldwide. And as these animals become rarer, demand may drive the cost up further, meaning they’ll just get more expensive. 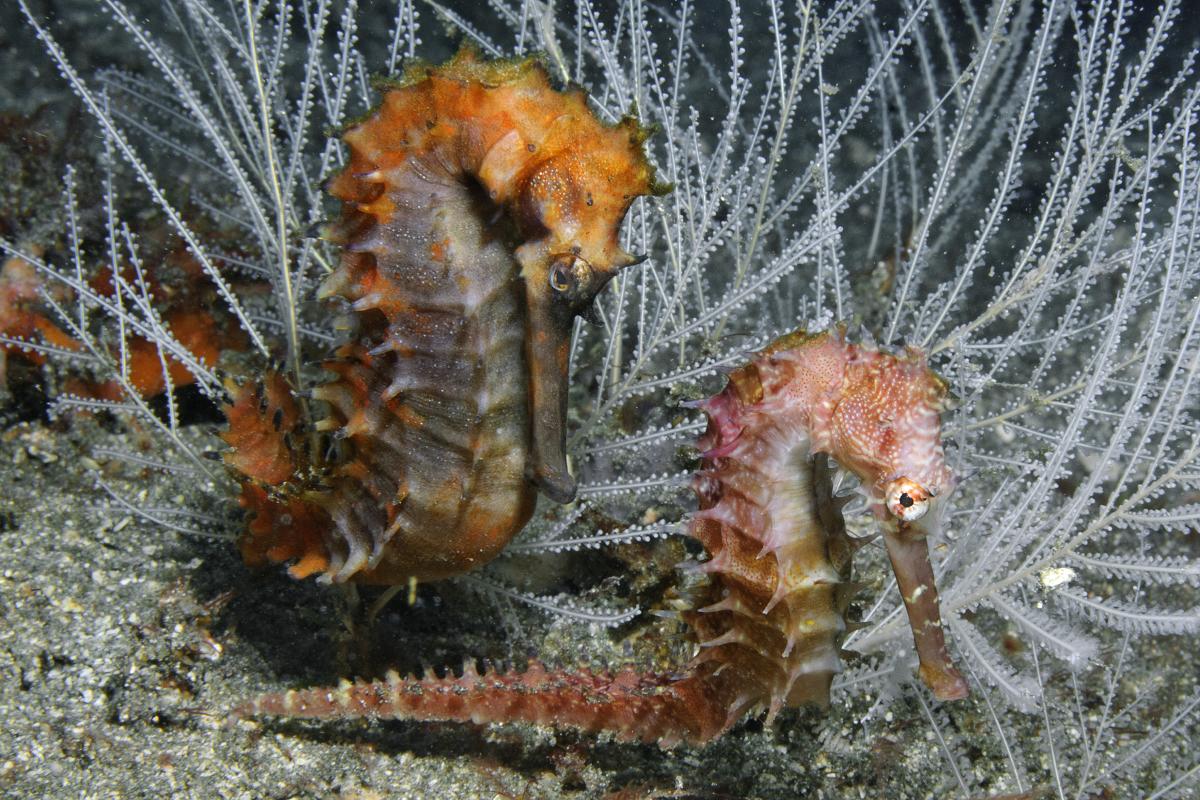 Boxes of loose tea, bags of roots and other natural products line the shelves of herbal shops in San Francisco’s Chinatown. Bins of animal and plant-based products are filed neatly beneath glass counters. Dried seahorses used to be common. You could buy them by the scoopful.

Nowadays, questions about seahorses are met with hesitation or silence. Seahorses are gone — or at least, less visible — in Bay Area markets.

Importers now need special permits to sell any non-native species, so shop owners have a much harder time stocking their shelves with seahorses legally. The permits, which have been required since seahorses were listed on the treaty CITES in 2002, certify that any species for sale were caught without harming wild populations, meaning herbal shops can’t sell bycatch anymore.

Following permitting requirements, most of the major exporting countries banned seahorse trade. Thailand, the biggest producer, voluntarily suspended its exports in 2016. Ninety-six percent of the global trade is now illegal.

“A decline in reported trade looks like a good thing on paper,” Foster said. “But that does not reflect what’s really happening.” Between 20 and 25 million dead, dried seahorses are still moving across borders every year, she estimated, largely from the same countries as before. Trade bans forced the industry underground, but it’s still massive.

“Now we’re talking about illegal wildlife trade,” Foster said. Desiccated seahorses have a long shelf life and are easy to hide in suitcases. They’re shipped illegally, so they don’t have permits, making the black market much harder to track.

But even if the trade bans had worked, seahorses would still be dying in droves, because most are killed unintentionally by fishing gear. Regardless if seahorses are traded legally or illegally, Foster said, “what matters is how many are coming out of the water.”

More selective fishing gear is one broad solution. “They need to stop trawling,” Foster said. “We need much more of the ocean set aside, where these gears are not being used.”

As conservationists push for long-term international solutions, aquariums, zoos and private businesses are exploring another option: captive breeding. Learning to farm seahorses, breeders say, offers a glimmer of hope for their future in the wild. 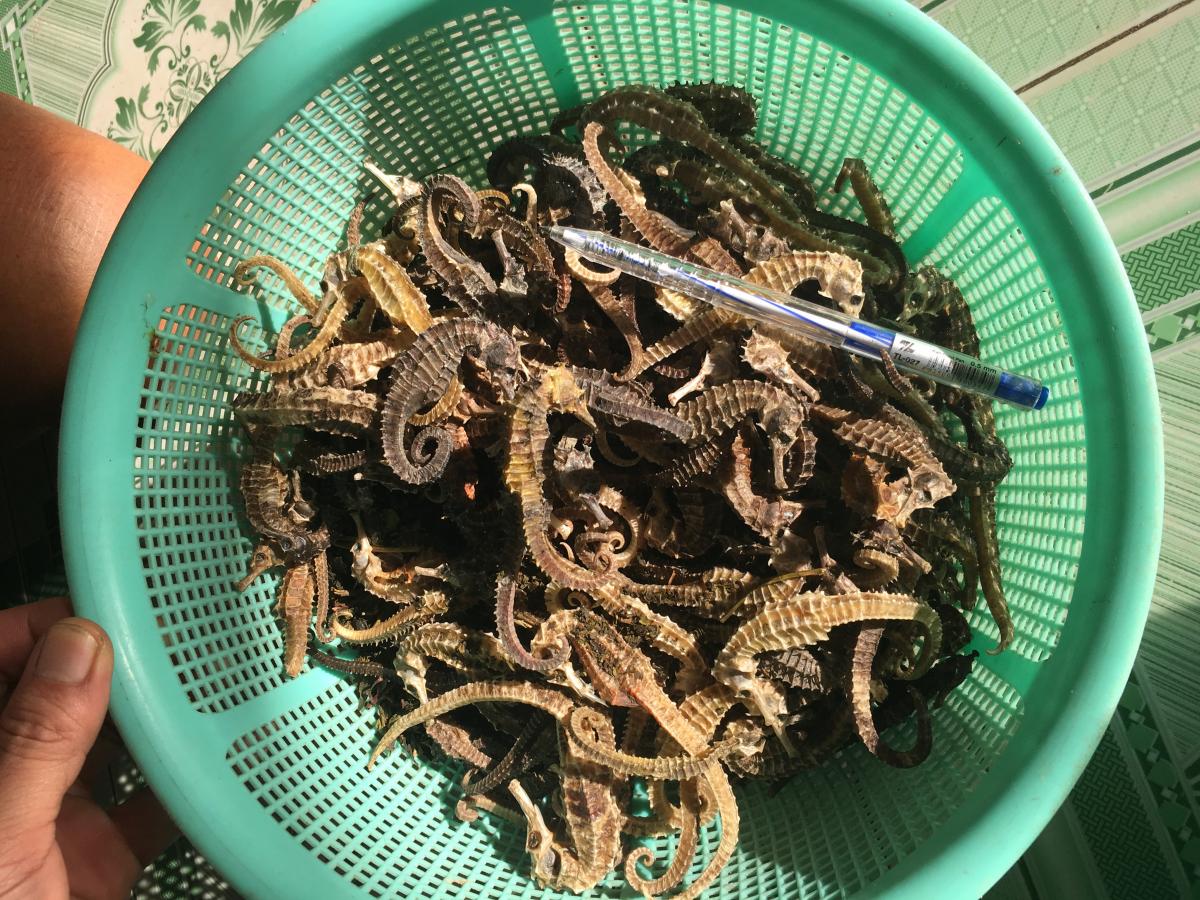 Today, most imported seahorses are wild-caught. But alternatives, like captive breeding, do exist. Farming is especially promising for the pet and aquarium trades, where captive-bred specimens gained popularity after wild ones became harder to buy.

The baby potbellied seahorses that crowded the glass at the California Academy of Sciences, for example, were born and raised in captivity thousands of miles from their native Australia.

Steven Yong sat behind the scenes at the Cal Academy, in a bright conference room framed by sleek, sliding-glass doors. Yong is the Studbook Keeper and Species Survival Program Coordinator for lined seahorses, native to the Eastern Seaboard. It’s his job to know the pedigrees kept  in every American Association of Zoos and Aquariums facility, and to play matchmaker by recommending which lineages should breed.

Seahorses, he said, are challenging to rear in captivity, because babies, called fry, rarely survive to adulthood. “Tiny fry need tiny food,” he said. In lieu of fish flakes, most aquariums feed their seahorses brine shrimp, which are small and relatively inexpensive, but offer limited nutrition. Facilities like the Academy are growing other live food options, to mimic the dietary diversity seahorses get in the wild. 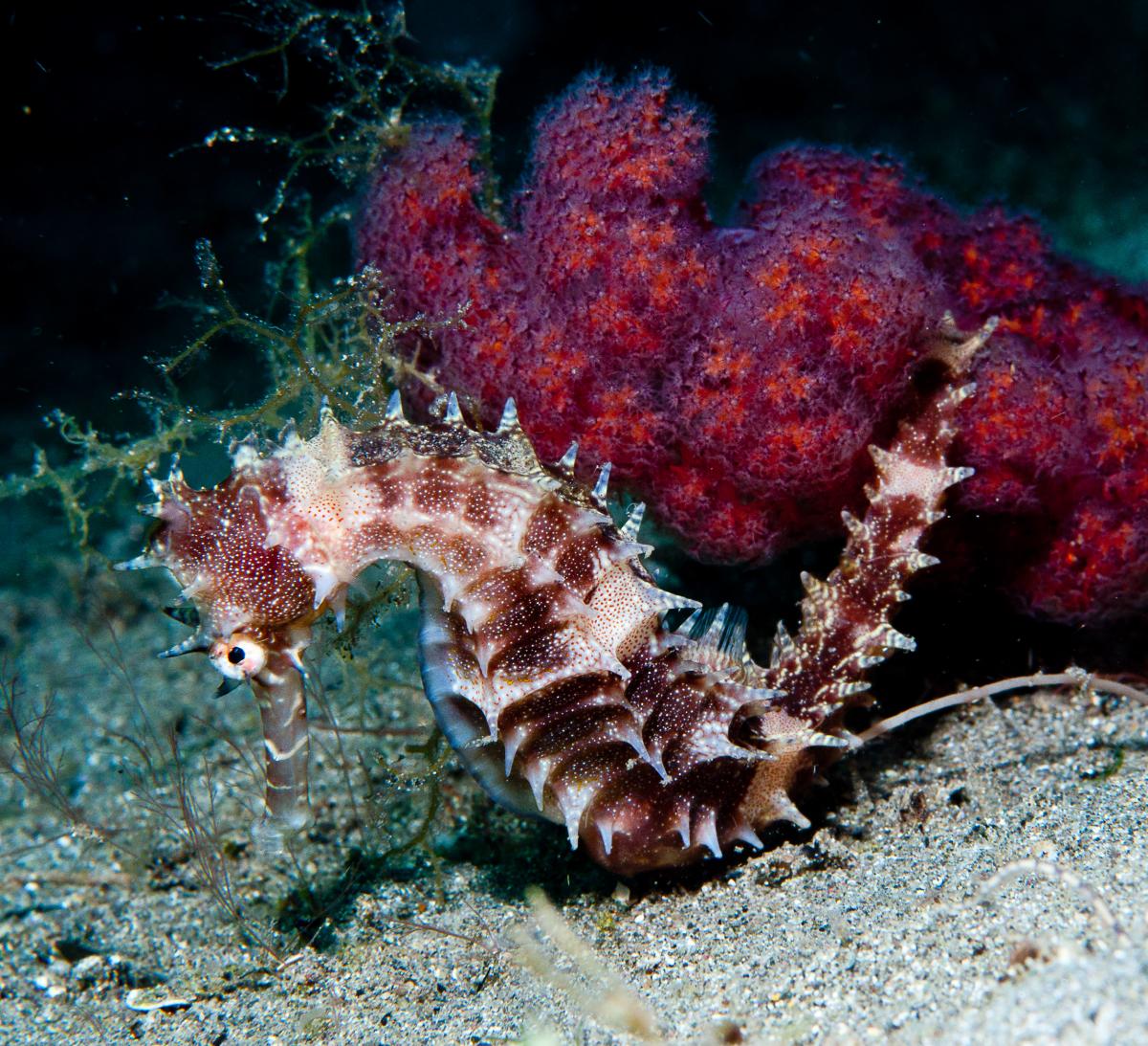 While aquariums “try to limit our wild collections,” Yong said, breeding programs are still far behind those for land animals or even freshwater fish.  Scientists don’t know enough about many wild populations to bring them into an aquarium setting. But some day, aquarists like Yong hope to breed imperiled seahorses, so they aren’t taken from the ocean.

Across the Pacific in Hawaii, Australia and Sri Lanka, seahorse farms have already cropped up. Carol Cozzi-Schmarr has raised seahorses in Kona, Hawaii, since 1998. Her farm, Ocean Rider, supplies 30 species to the pet trade and for global conservation.

“We did it to provide an alternative to taking seahorses out of the ocean,” she said. “If we weren’t preserving the species, no one would ever see them again.” Today, Schmarr said Ocean Rider is large enough to supply the pet trade with thousands of seahorses a year.

Even so, captive breeding is unlikely to be widespread or cost-effective enough to supply the much-larger traditional medicine market, Project Seahorse’s Foster cautioned. Schmarr, Foster and Yong emphasized the whole picture of bycatch, lingering market demand and habitat loss as a tangled, wicked problem. Yong questioned if captive breeding can ever really put a dent in seahorse woes. “They still have so many pressures that are causing their decline in the wild,” he said.

The baby potbellied seahorses in San Francisco were a minority — most seahorses aren’t so lucky. If global trends continue, some species could disappear from the wild entirely; museums might be the last places to see these charismatic little fish. Captive breeding and farming may help, but imagine, despite the vastness of the oceans, the last of their kind all born behind glass. 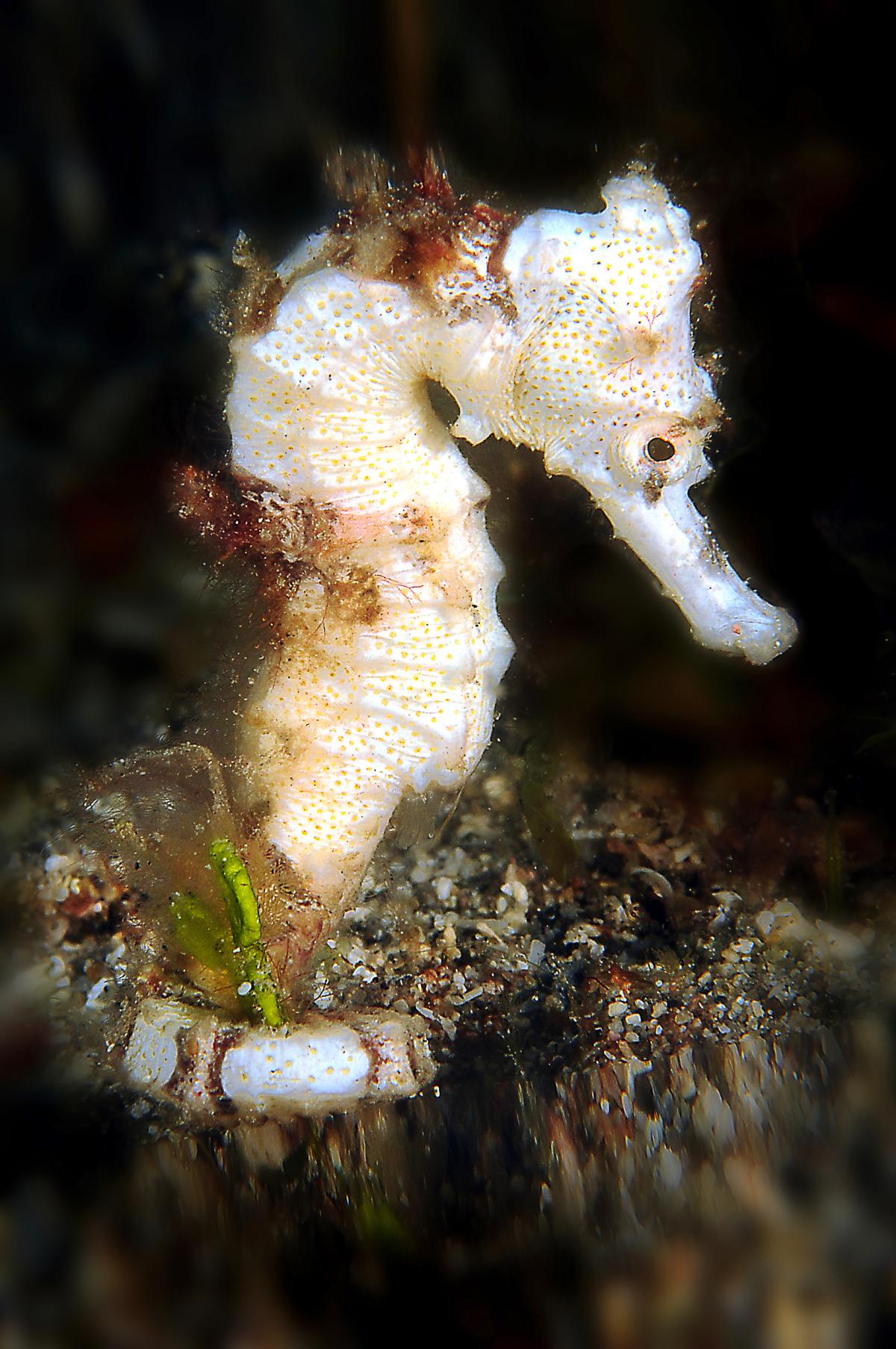