Oceans cover 71 percent of the Earth’s surface and contain most of the life on our planet, “and yet we have mapped more of the night sky than we have charted the ocean’s depths,” in the words of Pulitzer Prize-winning New York Times journalist Ian Urbina. The sheer vastness of the ocean – coupled with critical gaps in information and enforcement that persist in many parts of the world – has enabled the rise of legal voids that extend beyond the grasp of any country or territory. For the past five years, Urbina has been documenting cases of crime, abuse and opportunism on the high seas. His reporting took him across 20 seas and all five oceans – from the waters off the Somali coast to the Brazilian seafloor – and culminated in a book titled “The Outlaw Ocean: Journeys Across the Last Untamed Frontier.” Ahead of the book’s release on August 20, Oceana asked Urbina to share some of what he has learned throughout his travels.

Urbina: All of these types of abuses, whether they’re human rights abuses or environmental crimes, stem from a core problem, which is a lack of governance at sea, especially on the high seas. Specifically, there are three ways in which misbehavior happens offshore routinely and with impunity: too few rules, a lack of enforcement and insufficient awareness of what is happening there.

All of these problems are also connected in the sense that they occur with a certain tacit complicity from all of us who live on land. We all are the beneficiaries of the lawlessness on the high seas, where 90 percent of all the products we consume comes by way of ships, and the commercial channels are usually unbothered by the government and, therefore, rules. We have been able to access impossibly cheap products that arrive on our shelves with incredible speed. More broadly, 50 percent of our oxygen comes from the ocean, and in some coastal communities in Africa and Asia, 70 percent of the protein people consume comes from the ocean. We are deeply dependent on the ocean.

You wrote that you were stunned by the working conditions observed on some fishing boats, despite having reported on problematic industries like coal mining and garment factories in the past. What shocked you the most?

There were two types of abuses that shocked me the most about working conditions. The first were the acute abuses such as slavery and murder. The extent of captive workers in the international fishing industry really surprised me. These workers are captive through debt-bondage, through their reality of being so far offshore and by so few inspections or law enforcement. They are held captive through violence and sometimes actual chains. We’ve profiled, for example, one worker who was shackled by the neck when he was not fishing.

The other abuse that really shocked me was a less dramatic but more pervasive one, and it was shocking due to how unchecked and ignored it is. This abuse was wage theft. By that I mean workers who were recruited by manning agencies, usually from poor countries, were placed on fishing vessels and routinely they would work for months, sometimes years, being told that their wages were being sent to their families electronically, only to eventually be left ashore where they then found out that none or a mere fraction of their wages were actually ever transmitted. These workers quite often have zero recourse and have given up months if not years of their lives in labor. Those two categories of crimes really surprised me throughout the reporting. 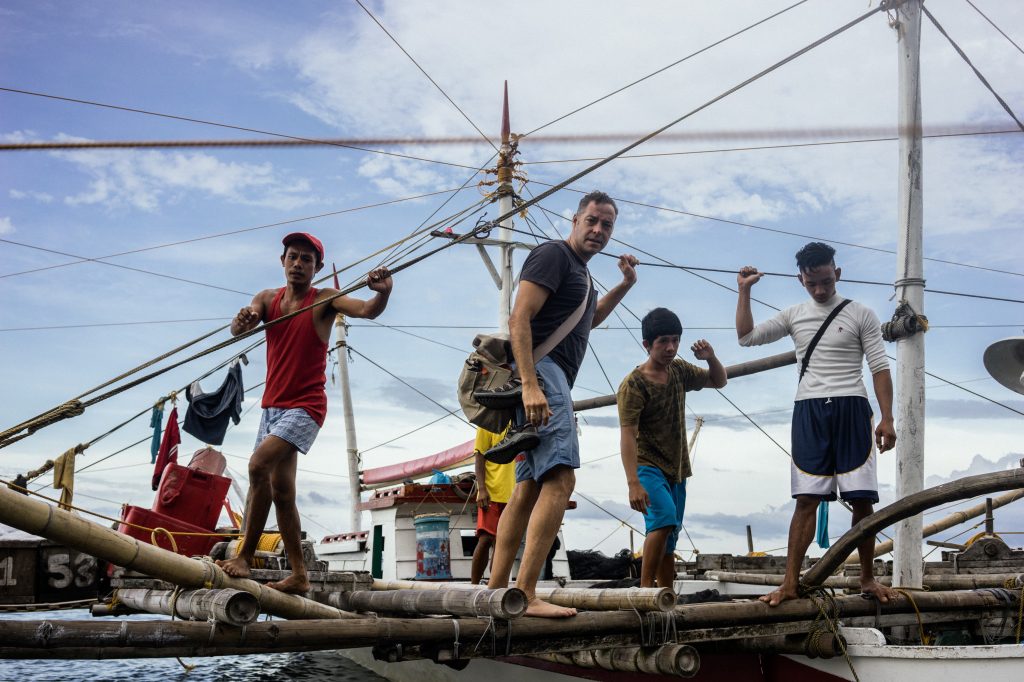 The plight of sweatshop workers in the Global South dominated headlines years ago, but few people had ever considered the working conditions of fishers until you and other reporters began telling their story. How did this go overlooked for so long?

I think there are several reasons that the human rights, labor and environmental crimes that occur offshore tend to be so under-reported journalistically. First of all, the workers on these ships are so far removed from law enforcement and labor inspectors that there’s little accountability at sea.

Secondly, I think there’s less environmental policing offshore because fish are neither cute nor cuddly. As such, the public pays far less attention to marine life because it’s more difficult to empathize with it.

Third, there’s this vision of the ocean being so vast that it’s assumed to also be indestructible, and for that reason there’s been the general view that no harm could come to the creatures that live out there because they would replenish themselves, the waters would dilute any form of pollution and the people crossing that space or working in it have been similarly viewed as, if not invisible, inconsequential.

Lastly, the nature of the workers who are in the offshore arena is also a contributing factor in the pervasiveness of their abuse. These workers tend to be from the developing world and are constantly in transit. The workers on these ships also tend to be from many different nations. Therefore, even when there might be motivation to protect them, it’s not clear who has jurisdiction to do so.

As a partner of the Vibrant Oceans Initiative, a Bloomberg Philanthropies project, Oceana has been working to fight illegal fishing and increase transparency of fishing activity in our oceans. Your book highlights the interconnectedness of many of these ocean issues. How would you describe the relationship between overfishing and human rights abuses at sea?

The connection between overfishing and human rights abuses at sea is partly based in the reality of diminishing near-shore fish stocks that cause ships to have to go much further and fish for much longer to break even. As fishing becomes more competitive because there are too many vessels on the water and too few fish left to catch, fishing companies and captains take more desperate measures to cut costs, including turning to trafficked and forced labor.

Tackling overfishing may help in countering human rights abuses offshore if the responses involve heightened monitoring of vessels. This monitoring would need to decidedly focus not just on how many fish were caught, but also what gear ships are using and whether it was in waters that are legal. The monitoring would also have to be set up with human rights concerns as a top priority. To track working conditions better we would need to require fishing companies to ensure that their crews have labor contracts, their wages are livable and there are methods for workers to safely and consistently report on the conditions on their vessels.

All of this is to say that heightened transparency and accountability in the international seafood supply chain is the first step to curing overfishing and human rights abuses at sea, but only if that monitoring is set up in a way to care and protect the fishers as much as the fish. One of the best examples of this sort of monitoring was the formation of Global Fishing Watch, a joint venture launched by Oceana, Google and SkyTruth in 2016 to track the movements of thousands of ships worldwide. 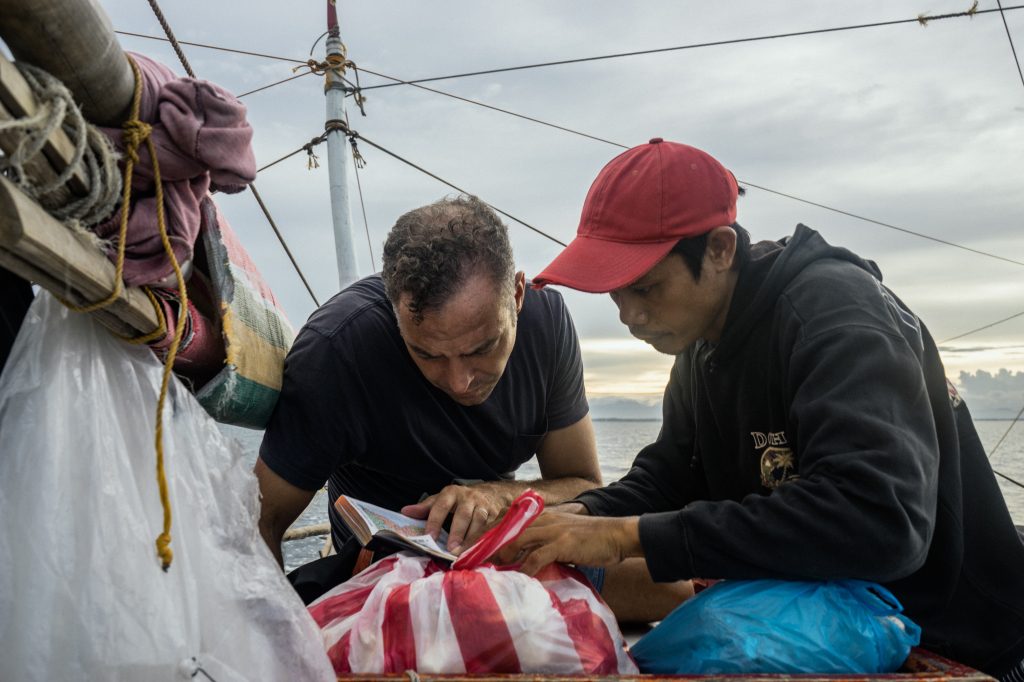 You wrote that you used to view coral as “little more than glamorized rocks,” but gained a new appreciation for the colorful creatures after taking a submarine trip to Brazil’s Amazon Reef. How did seeing the reef change your understanding of issues like offshore oil drilling and climate change?

Seeing the seafloor up close and the coral reef structures that were flourishing off the coast of Brazil was an eye-opener for me, if only because I finally understood the vibrancy and complexity of this habitat. The time I spent in the submarine touring this sub-sea world also made clear that one of the reasons that there is less protection of this distant and invisible realm is that the creatures flourishing there are so foreign and often so minute that they don’t even fit into our standard definitional categories.

What’s more, many of the lifeforms living in and around the coral have yet to be discovered or studied. What this tells us about the risks of oil drilling and the extent to which that drilling is further accelerating climate change is that for all the threats we know about there are countless additional ones that we don’t yet even understand.

What did you see or encounter during the scope of this project that gave you hope for a better future for our ocean?

I met many heroes over the past five years while reporting. Some of them were scientists, others were advocates, some were police and others were simply local citizens. Most of them were fighting for human rights or environmental protections and were up against daunting odds. I found this inspiring and a source of optimism.

I also found among the many workers on these ships an impressive level of ingenuity and a humbling desire to survive, not to mention humor and kindness, sometimes in the darkest conditions.

For more information on Oceana’s work to increase transparency at sea, visit our illegal fishing campaign page and read our June 2019 report on illegal fishing and human rights abuses at sea.