This Saturday marks the first World Shorebird Day, a day to celebrate these beautiful birds and raise awareness for their conservation. Shorebirds nest and migrate along beaches and grasslands, and are known to have some of the most impressive migrations in the animal kingdom.

They’re an incredibly diverse group of birds, consisting of plovers, oystercatchers, avocets, stilts, and sandpipers, and are usually characterized by long legs and beaks for feeding in the sand. Shorebirds also make fantastic parents, with male and female pairs often splitting their time incubating eggs while the other forages for food. Unfortunately, habitat degradation, pollution, and hunting in earlier centuries have caused for the decline of many of these species. Shorebirds also play crucial roles in ecosystems and food chains, feasting on fish, shellfish, insects, and mollusks.

To celebrate the first installment of World Shorebird Day, take a look below at five different shorebird species that all have unique traits. When you’re done learning about them, don’t forget to cast your vote for your favorite species below. We will reveal the winner on social media on Friday, September 12!

Update: Piping plovers are the victor! Take a look below to learn more about these endangered shorebirds. 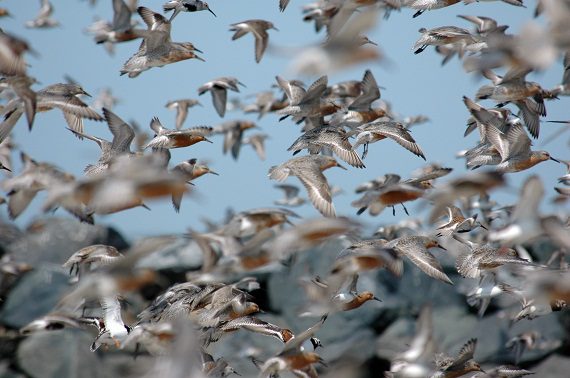 Red knots are one of the longest-distant migrants out of any bird species, making an impressive 9,000-mile-long migrations from Arctic breeding grounds to southern South America each year. Perhaps what they’re most known for, however, are their stopovers each spring in Delaware Bay and the mid-Atlantic coast, where red knots time their migrations with horseshoe crab spawning. Red knots feast on horseshoe crab eggs to fuel their migration, and the sea of red that swarms the area each year is certainly one sight to see. 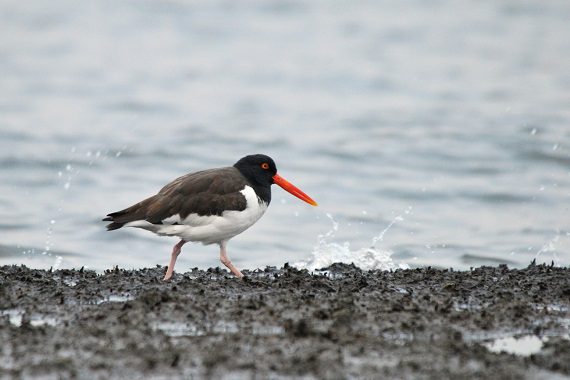 This shorebird has a striking orange-red color beak that vibrantly contrasts against black-and-brown feather plumages. Oystercatchers are aptly-named for their abilities to forage for and open shellfish and bivalves, like clams, mussels, and oysters. These birds nest on the U.S. East Coast and West Coast south of  Baja California. 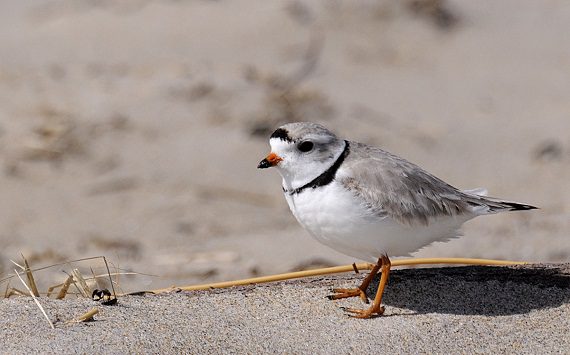 Piping plovers are some of the smallest, cutest shorebirds—but also some of the most threatened. They’re found along the Atlantic and Gulf coasts, as well as inland and around the Great Plains. Degradation of their beach-nesting habitat, as well as harassment by people, dogs, and vehicles have led to populations becoming both threatened and endangered under the Endangered Species Act. 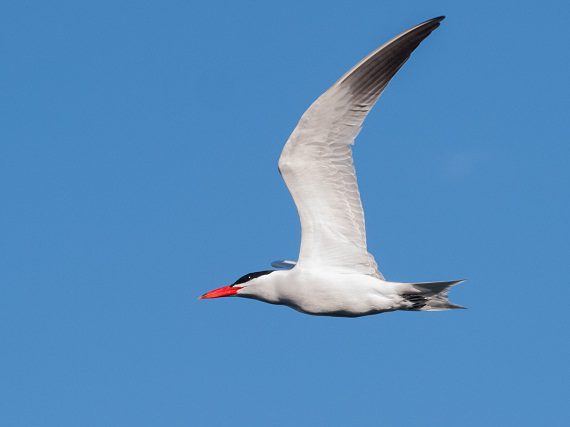 Caspian terns are the largest tern species, and are easily distinguished from other species by its bright red bill and black cap. These terns prefer flat rocky islands, sandy beaches, and partially vegetated areas for nesting, and are found on all continents except Antarctica. Caspians aggressively defend their nests when threatened, and are known to have actually caused bloody wounds on people who enter their colony. 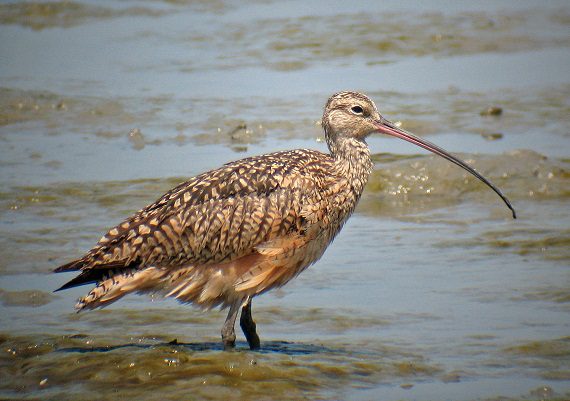 This sandpiper species is the largest shorebird in North America, with a bill that’s over a third of its body length and wings that can stretch for nearly three feet. It uses its bill to probe in sand and mudflats for worms, shrimp, and crabs, as well as a few insects.  These birds nest in western North America, and migrate to Mexico or the coast for the winter season.