The race to save sea turtles from deadly herpes tumors

In the middle of summer, on a muggy night, biologist Justin Perrault walked along a beach in South Florida, looking for nesting green sea turtles. He was seeking answers about a contagious and deadly disease.

Called fibropapillomatosis, or FP, the disease gives sea turtles giant cauliflower-like tumors, sometimes as large as grapefruits, on their eyes, mouths and flippers, as well as internally. “Sometimes the tumors get really bad and really large,” said Perrault, associate director of research at Loggerhead Marinelife Center in Juno Beach, Florida. Afflicted turtles wash up on beaches around the world, he said, starving, sick and often unable to swim or see.

FP is especially bad off the coasts of Florida, Hawaii and Texas. It continues to spread globally and scientists aren’t sure why, but they think it might be linked to warmer seas and polluted waters.

It’s one more nail in the coffin for endangered turtles that already face threats from habitat loss, sea level rise and accidental drowning in fishing gear.

Now, researchers in Florida are on a mission to understand more about this disease, while wildlife rehabilitators work to treat sick animals and get them back out to sea. “I can tell you firsthand, animals who have this disease really do suffer,” said Annie Page-Karjian, a veterinary scientist at Florida Atlantic University’s Harbor Branch Oceanographic Institute in Fort Pierce, Florida. 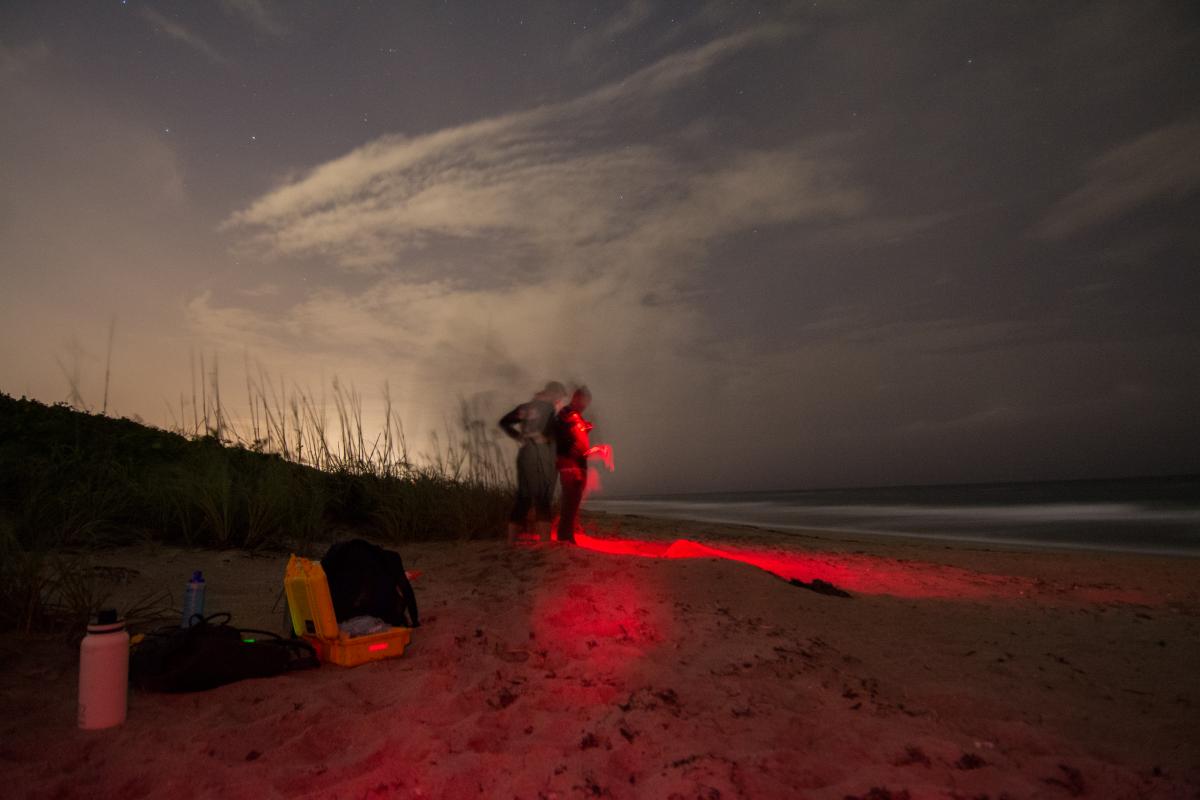 The disease first surfaced in 1934, in a green sea turtle from the Florida Keys. The sickness went quiet, then reappeared in the 1970s and ‘80s. Now, the disease is spreading throughout the southeast, said Page-Karjian. In Florida, she adds, the number of turtles stranding with FP continues to rise; It was 24 percent in 2016.

Here’s what scientists know: The tumors are caused by a type of herpes virus (not the same ones that can infect people), are similar to skin cancer and are most common in turtles living close to developed areas, in polluted and dirty water. That’s why juveniles most often show symptoms. They live close to shore, whereas hatchlings and adults live in the open ocean. The tumors also sometimes go away on their own. “So, we know they are able to combat the virus and it’s not necessarily a death sentence,” said Perrault. “The tumors can regress.”

Yet, much about the disease — like how the turtles catch it — remains a mystery. 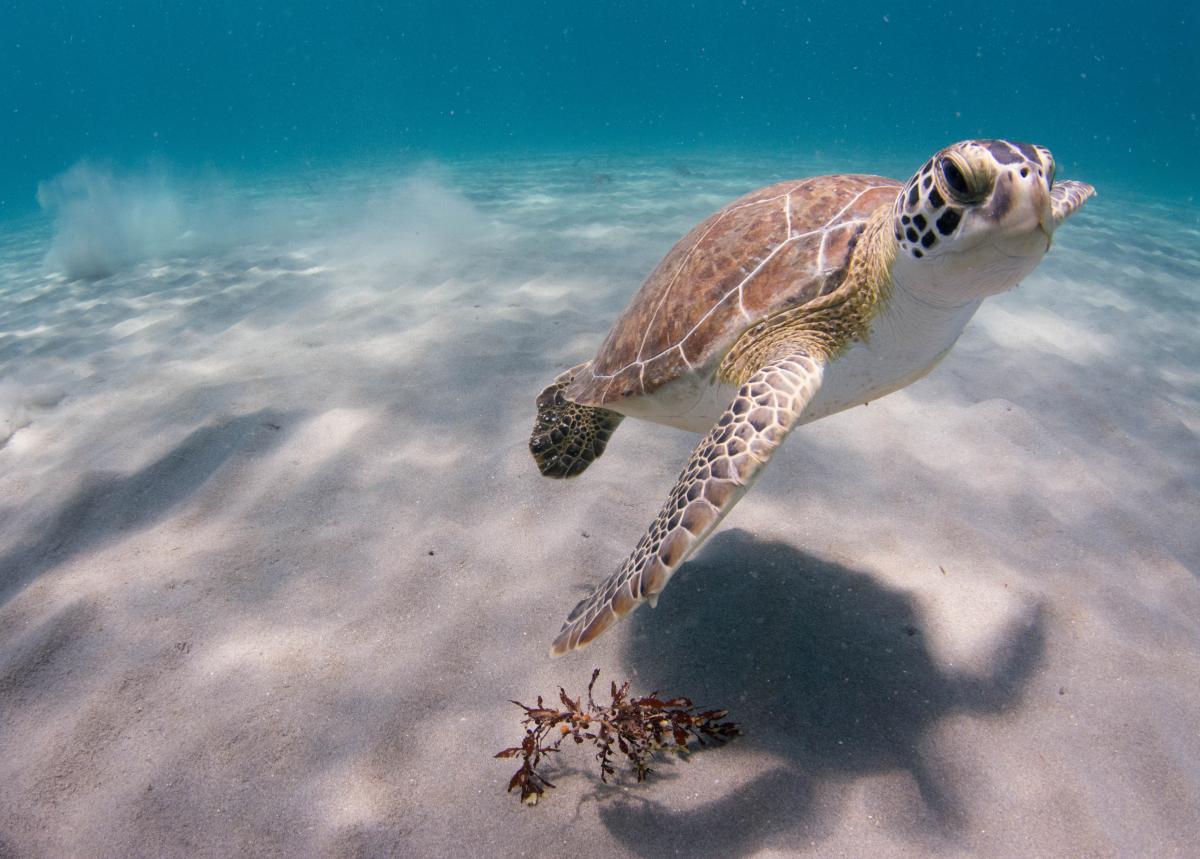 As Perrault walked along that moonlit South Florida shore, he saw a female green sea turtle, nicknamed Nancy, emerge from the water, crawl up onto the beach, dig a hole and begin to lay her eggs. The turtle entered a trance-like state once she began to lay.

Perrault approached her and collected a small sample of her blood. She didn’t have tumors, but the herpes virus that causes FP could still be in her blood: 43 percent of nesting female green turtles test positive for the virus, according to a new study that Page-Karjian is leading in collaboration with Perrault. Not all those females have visible symptoms. It’s possible, Perrault said, that pregnant turtles are using more energy to combat the virus, so less goes into reproduction. That could mean fewer babies in the long run.

When Nancy’s eggs hatched, Perrault returned to the beach. He collected blood samples from her offspring, to see if mother turtles pass the virus to their young. “If hatchlings are born with it,” he said, “they are combating this disease from day one. And we know nothing about the impacts during the earliest life stages.”

The birth lottery could determine a lot for turtles infected with FP, said Anna Savage, an evolutionary geneticist at the University of Central Florida in Orlando, who is not involved in Page-Karjian’s study. Savage wants to know why some infected turtles have tumors while others don’t.

“We know this herpes virus is connected to it,” Savage said. But “just having the herpes virus does not necessarily mean you are going to have tumors.” She suspects that interactions between the turtles’ immune systems and the virus decide which get tumors and which don’t. 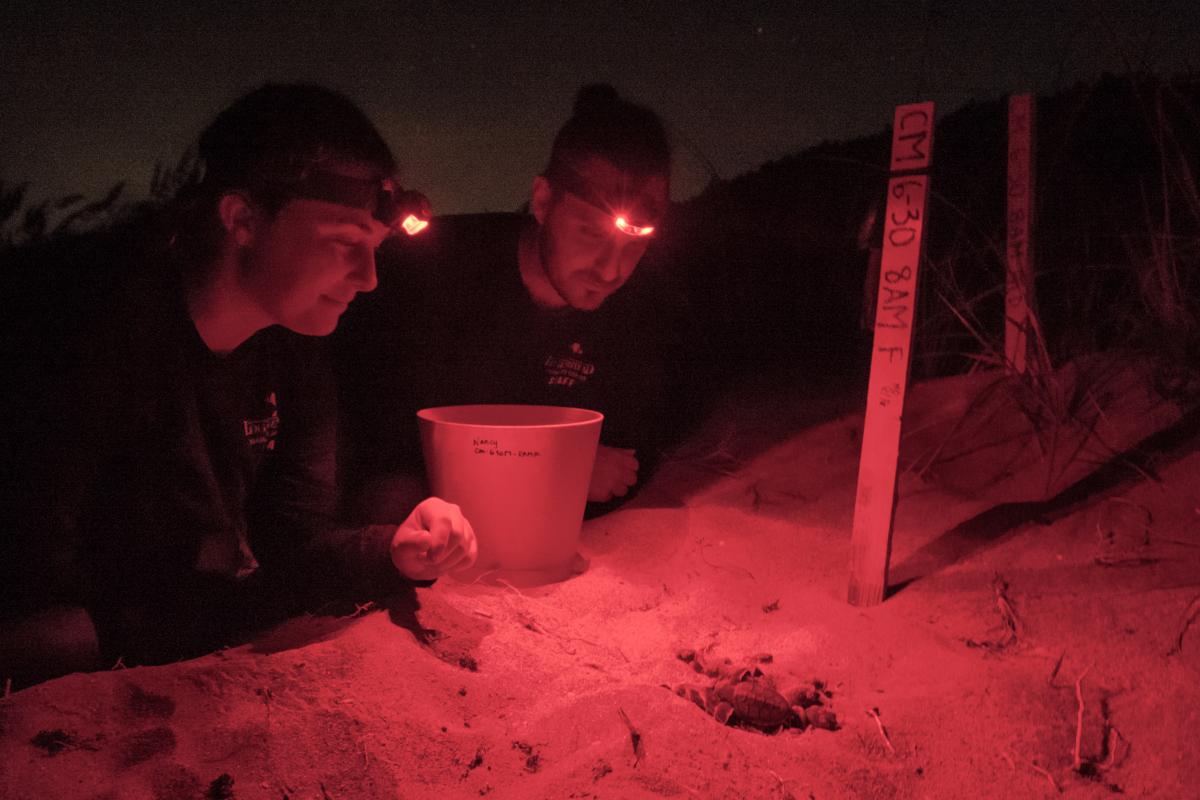 When turtles do wash up with tumors, wildlife veterinarians remove them surgically. It’s not a simple process, and can require multiple procedures and months of rehabilitation. The vets only like to keep the turtles anesthetized for about an hour at a time. And if the tumors are internal, there is nothing doctors can do to save them.

Many FP turtles also come in starving and with additional injuries, like wounds from boat strikes, said Whitney Crowder, the sea turtle rehabilitation coordinator at Gumbo Limbo Nature Center in Boca Raton, Florida. The tumors can impair their ability to swim, eat and avoid hazards, leaving turtles weakened and vulnerable to predators or secondary infections. The center typically treats about 30 FP turtles a year, about two-thirds of the animals they take in. 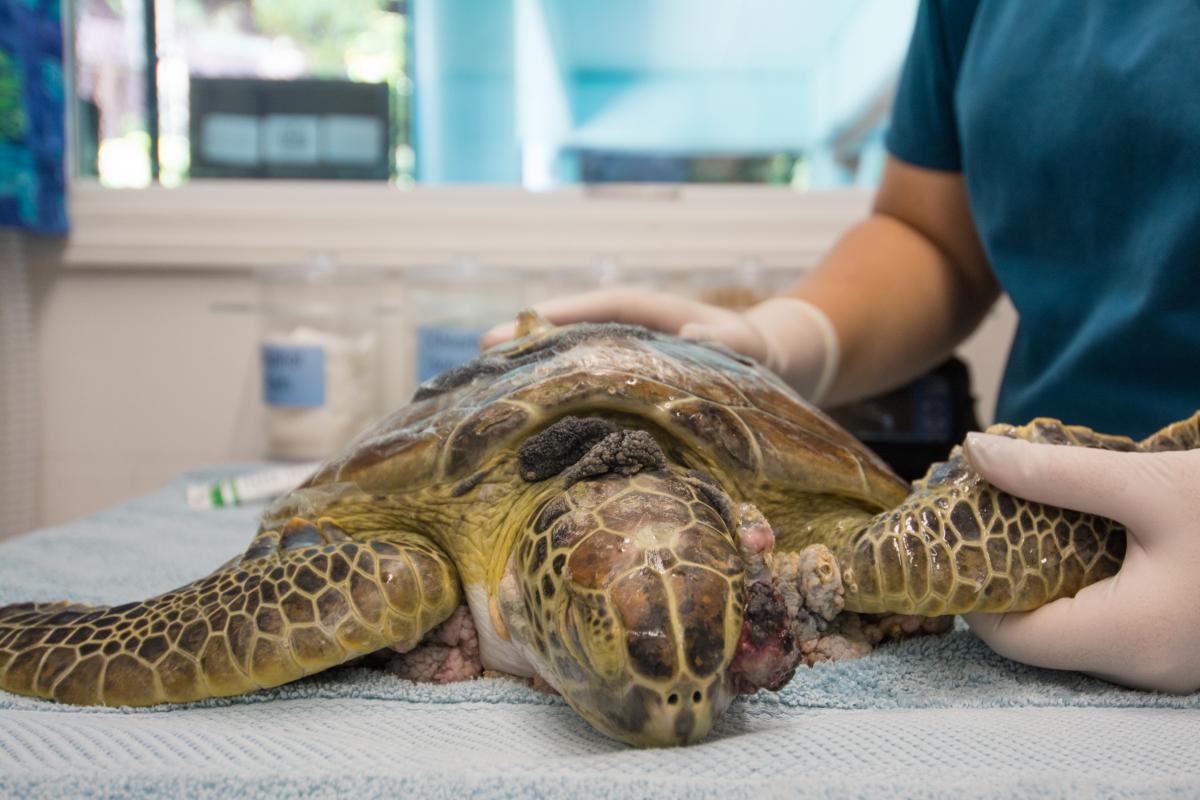 Treating tumors is a lot of work, and only “a temporary fix,” said Crowder. Turtles have stranded again in as little as a year after treatment and release, with new tumors. “I worry about them,” she said. Turtle after turtle comes in with grapefruit-sized tumors, then gets released right back into the dirty water that might exacerbate their illness. For her, the hope is that Gumbo Limbo’s turtles inspire the public to clean up the environment.

Despite FP, green sea turtle populations are rebounding after decades of decline. Scientists don’t yet know if this disease could jeopardize the species’ progress. Disease can be “that extra factor to push endangered populations over the edge,” said Page-Karjian.

Back at the lab, Page-Karjian and Perrault examined Nancy’s bloodwork from that muggy night in South Florida. She tested positive for the herpes virus that can cause FP. When Nancy’s babies hatched in late summer, Perrault collected blood samples from them too. Their bloodwork came back positive: They also have the virus.

The results in hatchlings are still preliminary, Perrault said. “We don’t know what it means yet, but this isn’t good.” 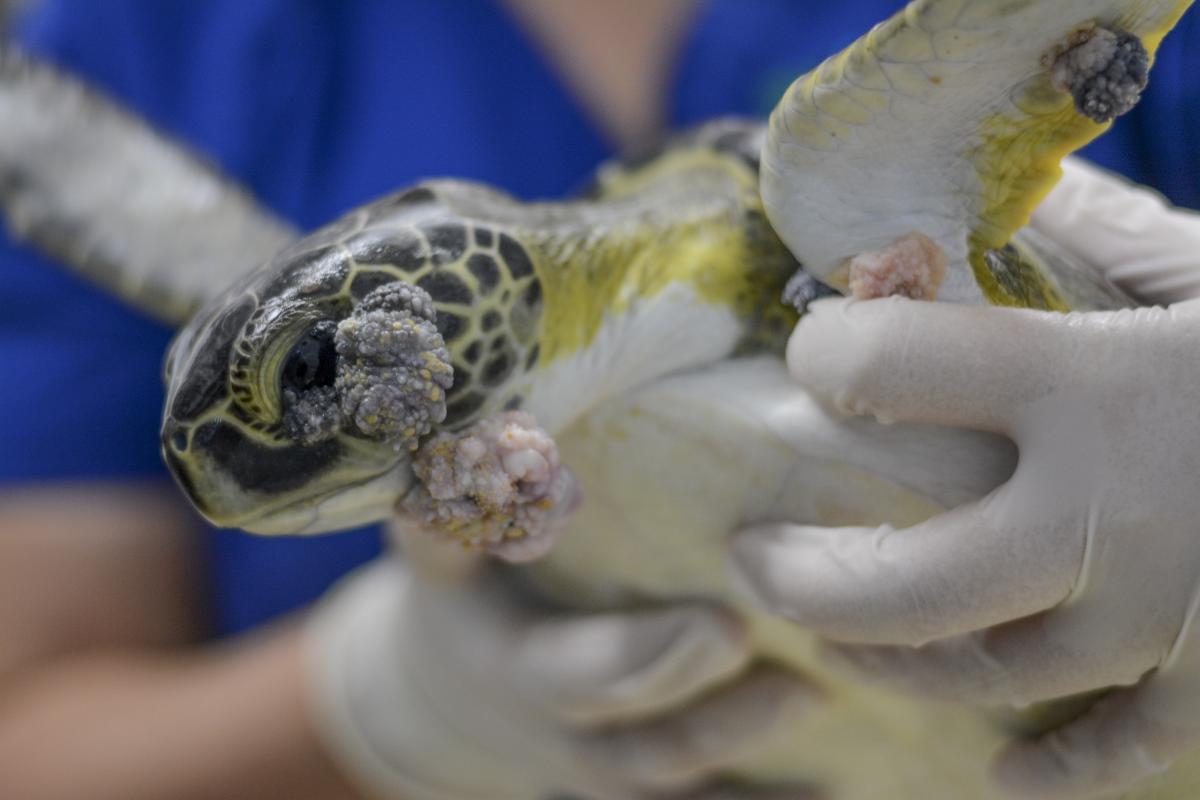