On a remote island, baby albatrosses suffer from a diet of plastic trash

Fledging season has arrived on Midway Atoll, a remote Pacific island where millions of albatrosses raise their chicks. But as the atoll’s youngsters spread their wings and shed their wispy gray down feathers, they leave behind something else: plastic — and tons of it.

Albatross parents take turns foraging hundreds of miles at sea to find the best food for their offspring. However, because they feed along the surface on squid, krill and fish eggs, they often accidentally swallow floating plastic and deliver it back to Midway.

Adults unwittingly bring an estimated 10,000 pounds of marine debris to Midway every year. This means that most chicks spend their first few months downing indigestible trash along with their food. 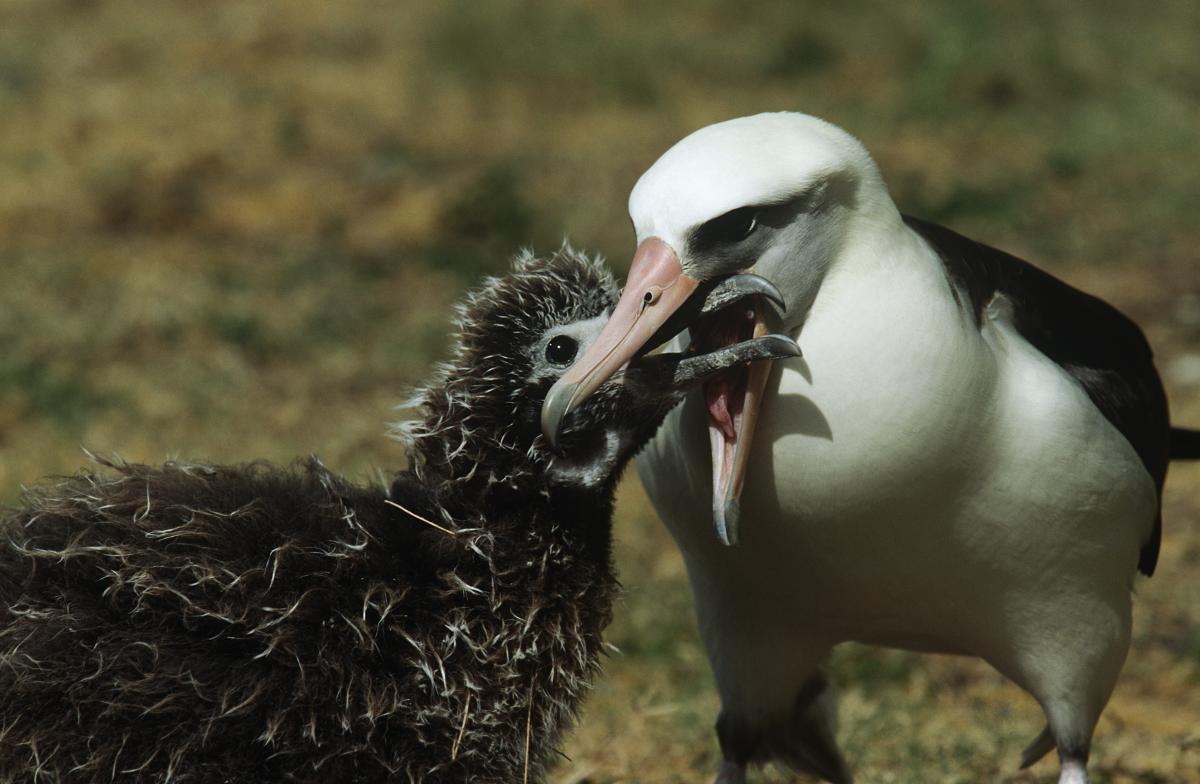 “I remember seeing an adult come back to feed its chick, and it was having a really hard time regurgitating something,” said Wieteke Holthuijzen, a bird researcher stationed on Midway. Holthuijzen thought the parent was struggling with an unwieldly morsel like a squid. “Then it regurgitated a toothbrush — and the chick ate it,” she said. “It’s awful but actually happens here quite a bit.”

Often, this junk has nowhere to go but back up. Beginning as early as June, young seabirds puke up masses of undigested material, called boluses, in preparation for leaving the nest. Normally, these boluses would be peppered with fish bones and squid beaks. Now, Holthuijzen said, they also brim with manmade debris.

The most common objects found in boluses tend to be those that are lightweight and buoyant, including cigarette lighters, bottle caps and fishing line. But Holthuijzen has also recovered other unusual items like small figurines and, once, a heart-shaped locket filled with water and glitter.

This diet of literal junk food can weaken or kill chicks. Sharp plastic pieces may slice up a seabird’s stomach or intestines, or fatally obstruct their digestion. Plastic and other debris soak up toxic pollutants in seawater. Experiments show that once inside a warm-blooded animal’s body, these toxins get released. A stomach stuffed with plastic might also trick a chick into feeling so full it stops eating or drinking enough to survive.

Midway Atoll is located in the Northwestern Hawaiian Islands and is the nesting ground for the world’s oldest known wild bird: Wisdom, a 66-year-old female Laysan albatross. The atoll was designated a national wildlife refuge in 1988, but these days, it can feel more like a refuge for trash. At the end of fledging season, the island is dotted with plastic-filled boluses and chick corpses crammed with trash. 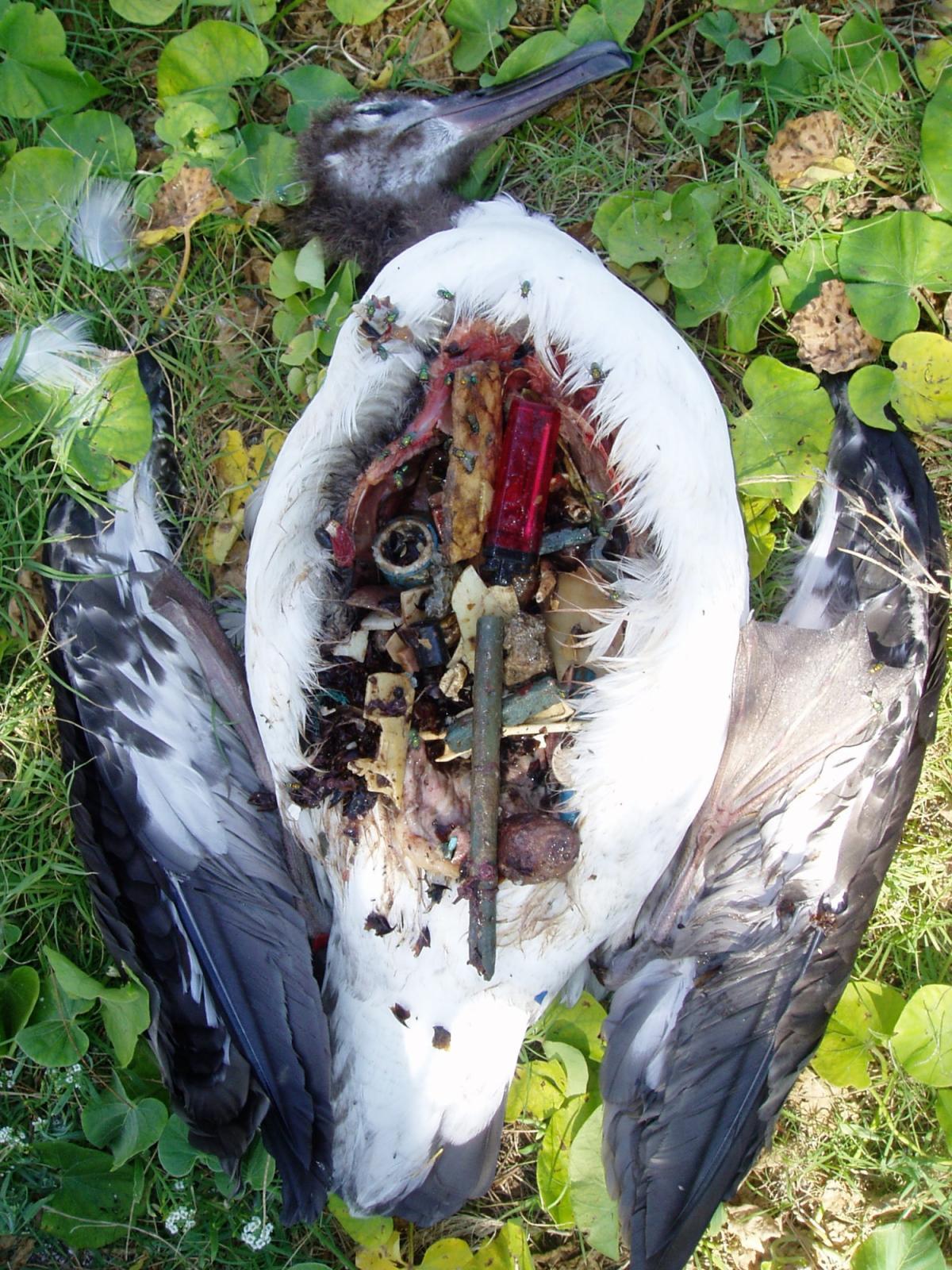 But birds aren’t the only source of manmade junk on the island. Midway lies along a giant ocean current that transports floating trash across thousands of miles. During a 2016 clean-up effort, workers collected and removed 15,206 pounds of debris in just eight days.

“Once plastic enters the ocean, it is a global problem,” said Jenna Jambeck, an expert on marine debris at the University of Georgia. Her 2015 report found that we dumped between 5 and 12.7 million metric tons of trash into the ocean in 2010.

Ocean plastic impacts a vast variety of animals, from tiny plankton to large vertebrates like fish, turtles and whales. “Exposure is widespread, and contamination is ubiquitous across diverse habitats and animals,” said Chelsea Rochman, a biologist at the University of Toronto. Seabirds are at particular risk because of their surface-feeding habits.

Though plastic is everywhere in the ocean from Arctic ice to the deep sea, we’re only just beginning to understand how it hurts marine animals. Rochman said that we need to learn more about what creatures are exposed and what concentrations are dangerous before it’s too late to act.

Several initiatives are underway or in the works to tackle ocean plastic. Some efforts aim to reduce consumer demand for single-use plastics like bottles and straws. Others focus on persuading governments to enact more effective recycling programs, or getting corporations to cut their dependence on plastic packaging.

“My hope is that if people all around the world figure out how to come together to solve this issue, maybe we can come together for other large global issues, too,” said Jambeck.

A solution couldn’t come any sooner for the birds of Midway Atoll. For now, a contractor patrols the grounds around the homes of the island’s handful of residents, collecting dead chicks to keep down the flies. “It’s shocking and morbid,” Holthuijzen said, “no matter how many times you see a dead chick.”