Gill is one lucky little sea turtle. He washed up very sick this spring, debilitated by cold ocean temperatures and a gutful of garbage. Gill might have died, if not for a special hospital in the basement of the South Carolina Aquarium.

The facility, in Charleston, is dedicated to sick sea turtles. It’s rehabilitated more than 220 loggerheads, greens, Kemp’s ridleys and leatherbacks over the last 17 years. Turtles need emergency care after run-ins with boats, tangling in fishing nets and swallowing hooks. Lately the hospital is seeing more patients that have eaten plastic trash. 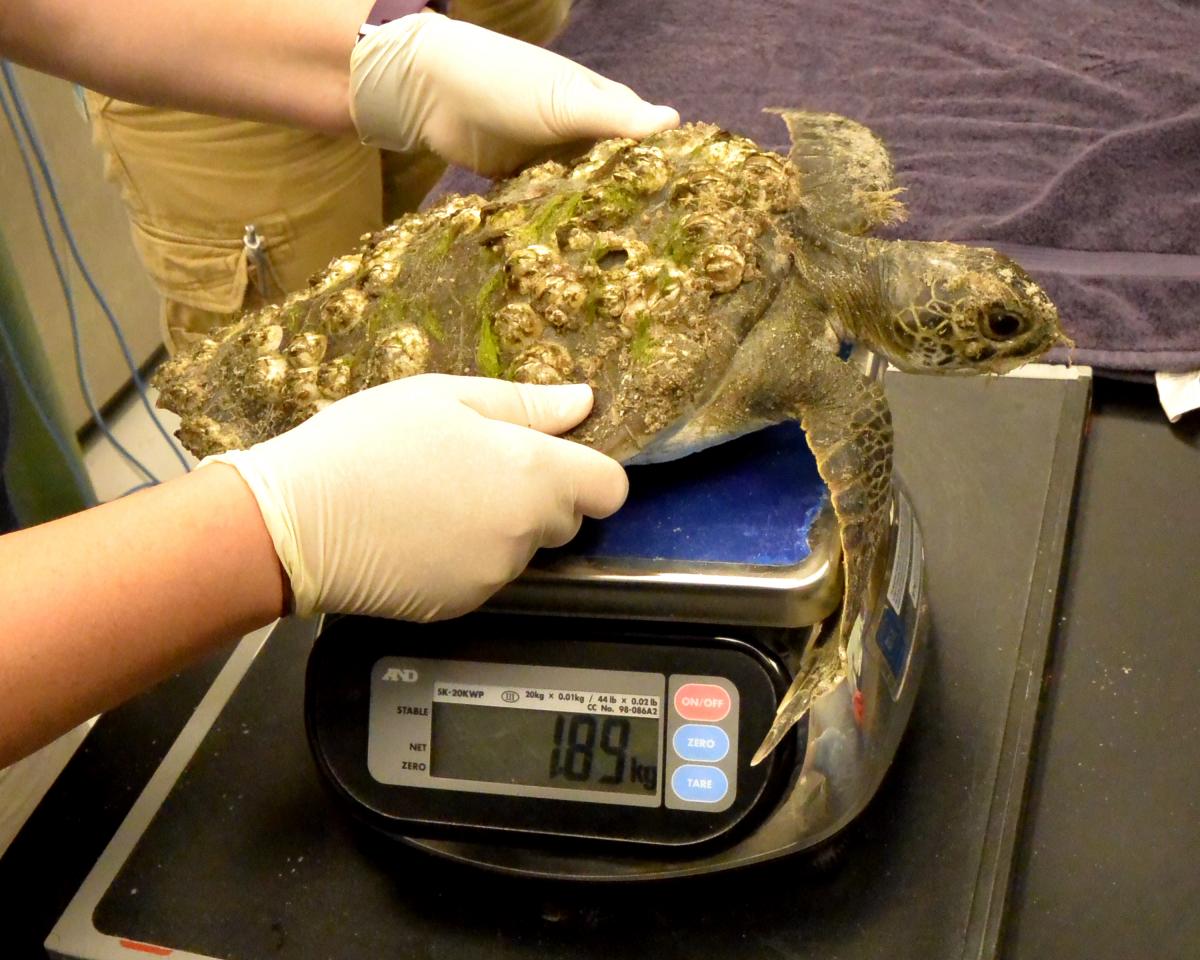 “Even the smallest piece of plastic can kill a sea turtle,” says Willow Melamet, manager of the aquarium’s care center. Last year, another green sea turtle needed surgery to pass a one-inch fragment of plastic. “We expected to see something big, and it was just this very small piece,” she says.

Little Gill is still just a kid. He (or she, it’s still too early to say), is probably between three and five years old, and washed up on North Myrtle Beach this April. A state volunteer rescued Gill and drove him three hours south to Charleston.

At the aquarium, a triage team of veterinarians and biologists whisked Gill downstairs for a physical exam, an X-ray and antibiotics, vitamins and fluids. They cleaned and rehydrated him in a freshwater bath, then checked him into a 520-gallon saltwater tank, where he’s still recovering today.

Gill hardly ate, or even moved, when he first came in. Then he pooped an 12-centimeter (5-inch) strip of latex, apparently from a balloon. Things were touch-and-go for a bit after that, says aquarium biologist Katelyn McGlothlin, who works closely with Gill. It’s “very likely” that eating debris made Gill sick, she says, especially in combination with cold ocean temperatures. Now the turtle’s on the mend. McGlothlin says, “he’s growing, gaining weight and in better condition.” 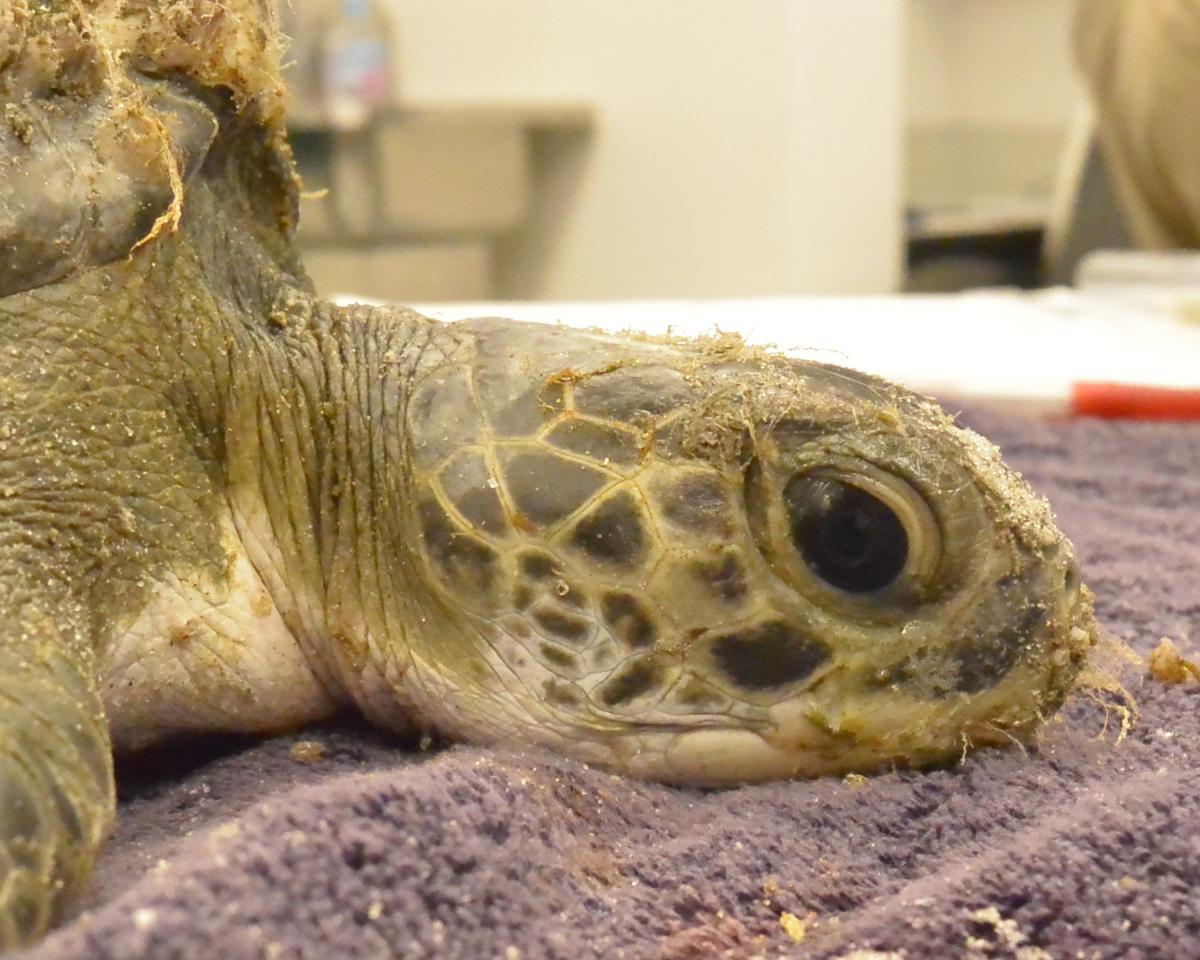 That strip of latex worked its way out of Gill naturally. But not all turtles — especially small and young ones — are so lucky. “Plastic as small as a BB can kill a baby turtle,” says Bette Zirkelbach, manager of The Turtle Hospital in Marathon Florida, another U.S. facility dedicated to sea turtle rescue and rehabilitation.

Zirkelbach sees the same trends in the Florida Keys as in South Carolina. More turtles are coming in with plastic-related problems, she says. Sometimes that’s a clogged gut. Sometimes it’s another injury, like a wound from a boat, that hit the turtle once it was plastic-sick and floating on the surface.

Turtles mistake floating debris like balloons and bags for food. And as humans make more plastic — from less than 50 million metric tons a year in the 1970s to more than 300 million in 2014 — a lot ends up in the ocean as garbage. More than half of all sea turtles may have eaten trash at this point, according to one 2015 study.

Hospitals are a bright spot for turtles in deepening trouble. After a stint in rehabilitation, patients are ready to go back to sea. Gill isn’t quite there yet. He has a few more months at the aquarium while slowly gaining his weight and strength back. Gill will need to fill out a little more before heading home. “Basically you want them to look chunky,” McGlothlin says. “For green sea turtles, it’s kind of like a football.”

Public education is a big part of the hope for turtles too, Melamet, McGlothlin and Zirkelbach agree. The South Carolina Aquarium just expanded its facilities in late May by opening a new recovery center which is also an exhibit. The public can also tour The Turtle Hospital in the Florida Keys.

“Even more than putting turtles back out there,” Zirkelbach says, “it’s that when people see us taking care of sea turtles, I think that compassion is contagious.”