What Did People Eat at the First Thanksgiving? Probably Way More Seafood than You Thought

For most Americans, ‘traditional’ Thanksgiving means roast turkey, mashed potatoes and pumpkin pie. But it turns out that most of what we think of as old-fashioned Turkey Day food is just historical fantasy. In 1621, when 90 Wampanoag and English men met in Plymouth, Massachusetts for a three-day feast, potatoes were unheard of in North America. The European newcomers had no wheat for pies and no cows for butter. And there’s no direct evidence they even ate turkey. So what did they have access to? Seafood — so much, in fact, it can be hard for our modern minds to grasp.

Nowadays, the Massachusetts coastline might bring to mind cute lobster shacks and touristy seaside towns. But in the 1600s, the region was less ground zero for quaint villages than it was Jurassic Park — at least when it came to the sea.

When the Pilgrims arrived in Massachussets, the waters swarmed with so many huge animals it made steering the Mayflower a dicey proposition. Hundreds of 70-ton North Atlantic right whales crowded Cape Cod Bay to feed on shoals of Atlantic menhaden that could stretch for 40 miles. Spawning Atlantic salmon — some bigger than grown men — packed like sardines into the rivers, along with 18-foot-long sturgeon sporting armored ‘scutes’ the size of dinner plates.

Captain John Smith, an explorer who visited the region on a look-see voyage in 1614, was gobsmacked by this all-you-could-catch buffet. In his 1614 work A Description of New England, Smith wrote: “You shall scarce finde any Baye, shallow shore, or Coue of sand, where you may not take many Clampes [clams], or Lobsters, or both at your pleasure, and in many places lode your boat if you please.”

And these were no ordinary shellfish. Untouched by the centuries of commercial harvesting that had denuded Europe’s shores, America’s coastline was alive with mussels, quahogs and clams. At low tide, 3-foot lobsters weighing 20 pounds crawled among the rocks and oyster reefs. 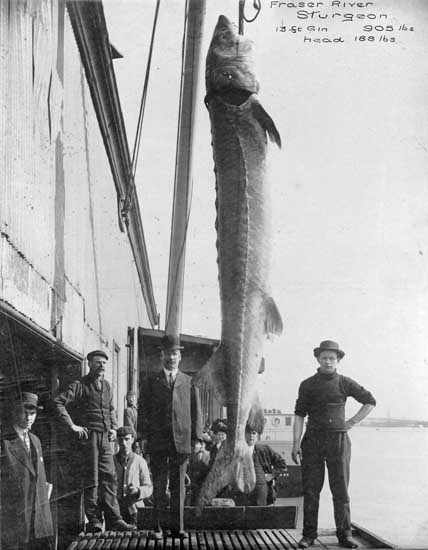 “The oysters be great ones, in form of a shoe-horne; some be a foot long,” William Wood wrote in his 1634 book New Englands Prospect. “This fish without shell is so big that it must admit of a division before you can well get it into your mouth.”

Fish were no less abundant. John Smith wrote that “man woman and childe, with a small hooke and line, by angling, may take diuerse sorts of excellent fish, at their pleasures.” As for the monster New England cod that could top 200 pounds? “He is a very bad fisher,” Smith said, “[who] cannot kill in one day with his hooke and line, one, two, or three hundred Cods.”

Eels, another favorite of the Europeans, could be lured by the dozens into traps set with chunks of lobster — lobster being so abundant that both the Piligrims and the Wampanoag preferred using it as bait. According to Wood, a single night’s work was enough for a season’s worth of eel suppers. “Some take a bushell in night in this manner,” he wrote, “eating as many as they have neede of for the present, and salt up the rest against winter.”

There’s no doubt New England’s cornucopia overflowed with seafood, but does that mean it was on the Thanksgiving menu in 1621? The only eyewitness account of the feast mentions just two kinds of food: “Five deer” and “fowl.”

But another primary source makes it clear that the English colonizers took advantage of Massachusetts’ marine bounty throughout the summer and fall of 1621. William Bradford, the governor of Plymouth Plantation, wrote in Of Plimouth Plantation that many people “were excersised in fishing, aboute codd, and bass, and other fish, of which they tooke good store, of which every family had their portion. All the sommer ther was no wante.”

While we can’t prove that seafood graced the first Thanksgiving table, there’s evidence aplenty to suggest that the Wampanoag and English heartily enjoyed the fruits of the sea. So if the prospect of bone-dry turkey and greasy green bean casserole has got you down, feel free to head to your local fishmonger and load up on oysters, lobster and wild salmon — you’ve got history on your side.