What’s in that Can? 4 Things to Consider when Buying Canned Tuna

When it comes to shelf-stable tuna, consumers may want to reconsider which can to crank open. Not all tuna is created equal, whether you’re looking for the lowest-mercury option, or you want to make sure your fish was caught in an eco-friendly manner. We’ve gathered key data to help you figure out what you’re eating and steer clear of any questionable contents.

1. Single out what’s on the shelf

Canned tuna ranks behind shrimp and salmon as the third most popular seafood in the United States, with a market value of $1.5 billion. But tuna aren’t a single species of fish. “Tuna” is an umbrella term that encompasses 61 species scientists often categorize as “tuna and tuna-like fish.” Of these 61, only 14 are considered true tuna. And of the 15 sold commercially or caught for sport, usually just three varieties — albacore, skipjack and yellowfin — are sent to the cannery.

Cans are sold in two types: “white,” and “light” or “chunk light.” Chunk light doesn’t refer to a specific species, but “white” means that you’re buying albacore. “Premium,” “gourmet” or “tonno” tuna often comes from yellowfin, although these cans represent a smaller share of the canned tuna market.

Because of its pale tint, firm texture and light flavor, American consumers prefer albacore and therefore pay a premium for it — around $5.32 a pound retail, compared to $3.17 a pound for skipjack. Skipjack is smaller, faster-growing and more abundant than albacore or yellowfin. As we’ll see, the differences between these species can have big implications for sustainability and consumer health.

2. Determine the risk of mercury

All seafood is to some extent polluted by mercury emissions from coal-burning power plants and other sources, but tuna often takes the cake. These sleek, swift-swimming predators are responsible for nearly 40 percent of dietary exposure to mercury in the U.S. This is problematic, especially for pregnant women and young children who are encouraged to eat seafood rich in omega-3s.

Some tuna species are riskier for consumers than others. Albacore can contain three times more mercury than skipjack, which is usually sold as “light” tuna. That’s because albacore are big predators, capable of growing up to 1.4 meters (4.5 feet long). As a general rule, the bigger and longer-lived a predatory fish is, the more mercury it tends to have accumulated in its flesh.

Mercury is particularly dangerous to fetuses, babies and young children. For this reason, the FDA recommends that adults and children eat no more than one serving of yellowfin or albacore a week, and no more than three servings of “light” or “chunk light” tuna a week.

The good news is that mercury levels in some tuna populations are on the decline. Researchers suggest that this decline is linked with America’s shift away from coal-fired plants — another good reason to support the development of solar and wind energy.

In addition to mercury contamination in tuna, conscious consumers may also want to consider how the species was caught as well as trends in its population. White tuna, for example, may not be the best choice on the sustainability front. Globally, albacore is considered a near-threatened species. Some populations are overexploited and experiencing overfishing, and because cans often don’t provide the location of catch, the consumer cannot tell if the albacore were taken from a healthy or unhealthy stock.

Compared to albacore, skipjack fisheries are thought to be managed effectively and are categorized as “least concern” by international conservation groups. 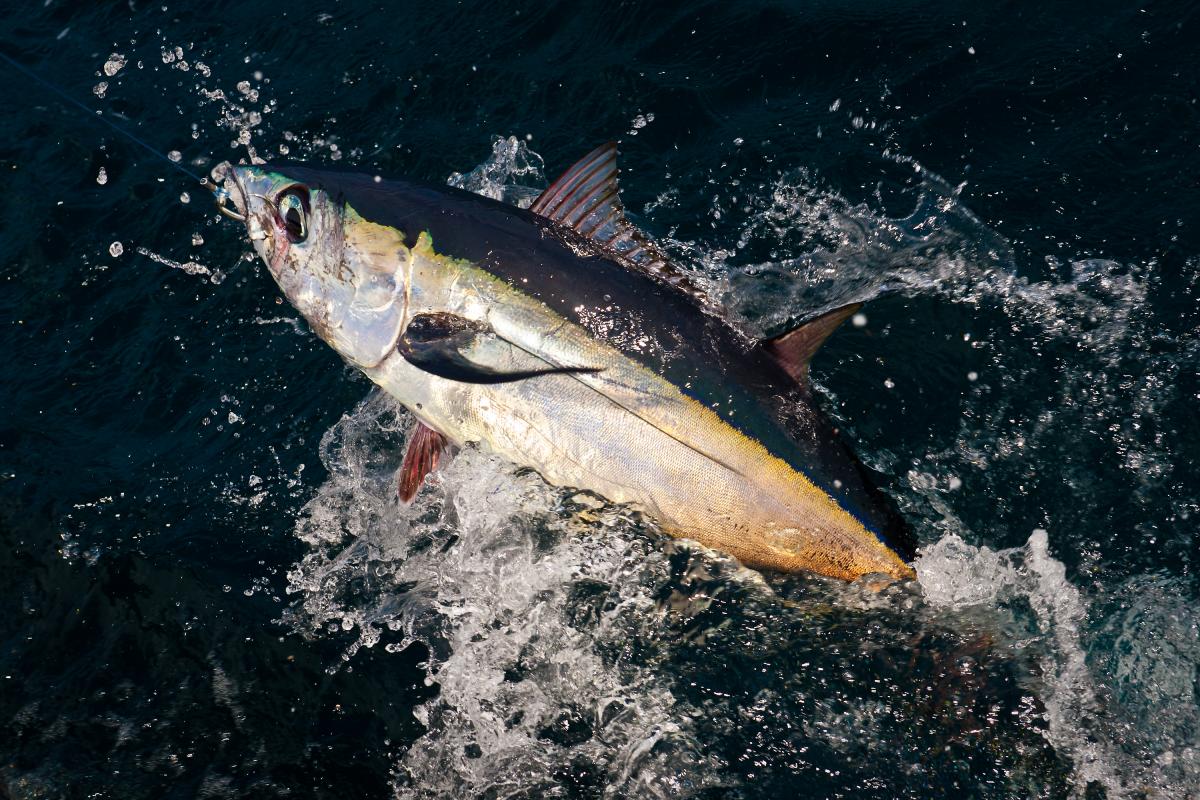 With all species of tuna, their eco-friendly creds vary widely depending on how they were caught. Some gear, like longlines and drift gill nets, kill not only tuna, but sharks, sea turtles and seabirds. Other methods, like pole-and-line or trolling, kill very few non-target species.

Adding to the possible confusion is the fact that some producers combine skipjack and yellowfin tuna — the latter being a near-threatened species — to lower the per-can mercury that would occur if sold as pure yellowfin. This means consumers wanting to shop responsibly by eating “light” tuna might not be getting the whole story when it comes to health and sustainability concerns.

If it sounds like a lot of work for consumers to tell what type of tuna is in their sandwich — well, it can be, and seafood labeling laws often don’t make things any easier. Some tuna products are not required by law to name their specific species.

Fortunately, some producers are starting to make it a lot easier on consumers by providing sustainability information on can labels. Some of these also include links to the company websites, which offer detailed information on the producers’ products and policies to better help shoppers make smarter seafood choices. Certain grocers are following suit. Whole Foods, for example, recently committed to selling only sustainable, fully-traceable tuna by winter 2018.

For an even deeper dive, there are also sustainability guides like the Monterey Bay Aquarium’s Seafood Watch, which rates seafood based on its environmental impacts. NOAA’s FishWatch is another useful tool that provides expansive information about the abundance, biology and management of different species.

And as for cans that provide no clues about what species it contains, or where or how it was caught? You may want to think twice before pulling out the can opener.