You’re Probably Eating Asian Catfish without Knowing It. Should You Be Worried?

It might be called grouper or sole on the menu, but if you test your dinner’s DNA, there’s a decent chance you’ll find that you’re actually eating farm-raised Vietnamese catfish.

With its gray potbelly and shovel-shaped head, the pangasius isn’t the prettiest fish in the water — but when it comes to making budget fillets, it’s the world champ. Pangasius has mild white flesh and an almost uncanny ability to thrive in aquaculture conditions that would kill other fish. Because it’s cheap and tasty, pangasius has become the world’s number one stand-in for pricier or harder-to-find types of seafood.

The catfish behind the curtain

According to a recent Oceana report, pangasius has masqueraded as at least 18 other kinds of fish, from inexpensive farmed species to costly wild-caught fish like red snapper or cod. That’s bad news for diners’ pocketbooks — few people would want to pay top dollar for fillets that cost less than $2 per pound wholesale. And it also keeps conscious eaters in the dark about this fish’s potential health and environmental risks.

In its report, Oceana tallied up studies from around the globe and found that, on average, one in five of all fish dishes tested were found to be mislabeled as the wrong species. Tilapia became snapper. Escolar became white tuna. And thanks to rock-bottom prices, pangasius became just about anything.

“There are dozens of cases of pangaisus fraud,” said Kimberly Warner, the senior scientist at Oceana and lead author of the report. “Millions of dollars and many businesses have been implicated in this particular kind of seafood swapping at all levels of the supply chain.”

A 2015 investigation, for example, found that more than a third of 19 restaurants in Atlanta were selling pangasius as grouper. In 2009, the president of a Virginia-based import company was sentenced to five years in prison and ordered to pay $12 million after he fraudulently re-christened $15 million worth of pangasius as six other species.

Also called basa, tra, swai or striped catfish, pangasius was not always the two-million-ton juggernaught it is today. From the 1940s to the 1990s, only a handful of small-scale commercial farms dotted Vietnam’s Mekong Delta.

But in the early 2000s the industry grew explosively thanks to new aquaculture techniques and booming demand overseas. This growth coincided with the first appearance of fraudulently labeled pangasius in the United States in 2002.

Pangasius seems almost custom-made for life on a fish farm. It can tolerate far greater stocking densities than other catfish species — up to 70 fish per square meter — and can gulp air if pollution and overcrowding drive oxygen in the water too low. Because it’s an omnivore, pangasius grows quickly on a cheap, low-protein diet of rice bran, supplemented by ill-defined “trash fish” and fishmeal from wild-caught sources. 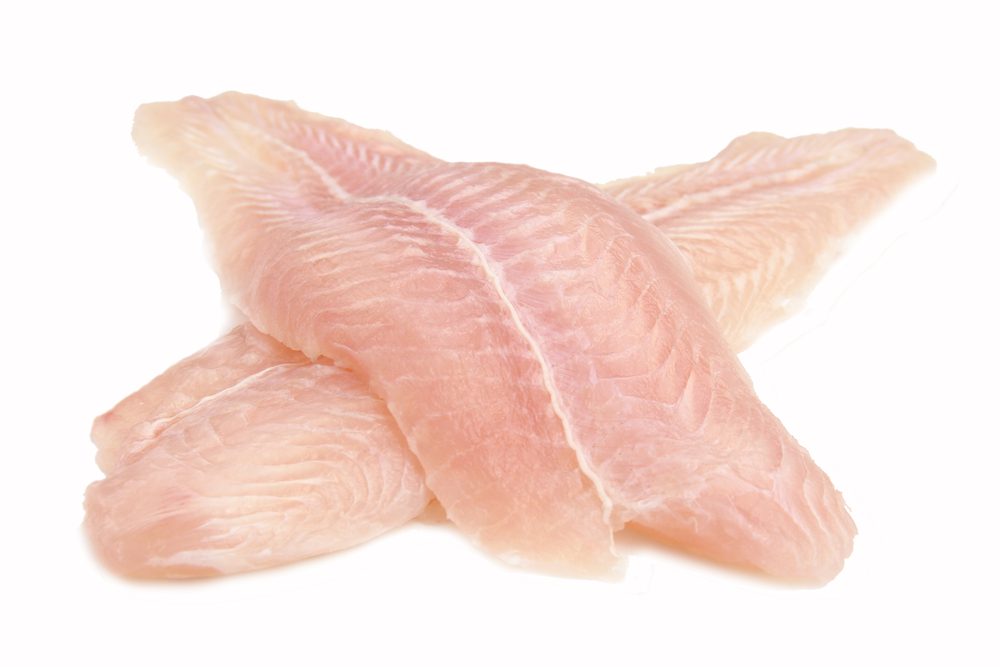 There are conflicting opinions on how safe pangasius is for consumers and the environment. According to a 2015 study, a diner would have to eat between 100 and 300 kilograms (220 to 660 pounds) at one sitting to get sick from antibiotic, pesticide or preservative residues.

A 2016 study reported that while pangasius tested “far lower than the limits established by authorities” for heavy metal contamination, between 70 to 80 percent of the samples were contaminated by Vibrio bacteria — the microbes behind most cases of shellfish poisoning. Raw or undercooked pangasius, the authors warned, could pose a hazard to consumers.

There are less immediate risks. Monterey Bay Aquarium’s Seafood Watch program ranks pangasius in its lowest category, ‘avoid,’ for two big reasons. First, pangasius farmers flush sludge and wastewater from fish ponds into the Mekong River and its tributaries, polluting local waterways. Second, antibiotic residues in the sludge have given rise to drug-resistant bacteria, including bugs that can withstand antibiotics important for human medicine.

“It will come back to bite us if there are more drug resistant bacteria out there,” said Warner. “The indiscriminate use of antibiotics will only endanger the health of humans down the road, when there are no longer drugs that can treat infectious diseases.”

Adding to this are concerns that freshwater fish farming in the Mekong has slashed wetland habitat for endangered otters, birds and turtles.

And while pangasius has a better ‘feed conversion’ ratio than pigs — that is, how efficiently it turns food into flesh — the use of wild fish in its feed raises concerns that it prompts overfishing in countries like Peru, the world’s largest producer of fishmeal and oil.

In recent years, Vietnam’s pangasius industry has taken a hit. Additional Asian countries are adopting pangasius farming, and demand has fallen in Europe and North America as governments and buyers step up calls for better hygiene and food safety.

In response, Vietnam’s pangasius industry has implemented measures to make its product cleaner and safer. The first Aquaculture Stewardship Council eco-certified pangasius was launched in 2013. A handful of other certification programs soon followed suit. Seafood Watch ranks fish raised under these standards as mid-tier ‘good alternatives.’

But because less than 1 percent of imported seafood is inspected in the United States for mislabeling, it’s unlikely that ‘striped catfish’ fraud will go away without major policy change. Advocates for better labeling laws hope that the presidential task force devoted to combating illegal fishing and seafood fraud can shore up gaps in America’s fish traceability regulations.