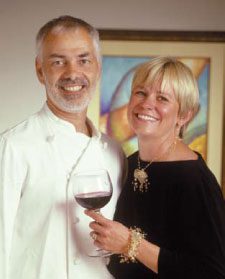 For the Moroccan Salad

Char bell peppers directly over gas flame or in broiler until blackened on all sides.

Transfer to paper bag and seal tightly. Let stand for 15 minutes. Peel, seed, and chop peppers. Toast flat bread directly over gas flame or in broiler until crisp and charred on both sides. Tear into bite size pieces.

Preheat oven to 400°F. Place peppers, bread, chickpeas, and next four ingredients into a large bowl. Add ¾ cup charmoula and toss to coat. Season with salt and pepper.

Heat oil in large ovenproof non-stick skillet  over medium-high heat. Add fish with marinade still clinging to it, and cook until  brown, or about 3 minutes on each side. Transfer skillet to oven and roast fish until thoroughly cooked, about 8 minutes.

Place salad on each serving plate. Top with bass fillet and serve.