Resolution receives most votes of multiple resolutions considered by the company.

This week, at Amazon’s annual meeting, 48% of the company’s shareholder votes backed a resolution asking the e-commerce giant to address its growing plastic packaging problem, falling just short of a majority. The resolution was presented by Conrad MacKerron, Senior Vice President of As You Sow, the non-profit organization that filed the resolution. The resolution, which called for the company to issue a report on its plastic packaging footprint and commit to reducing that footprint going forward, received the most support of any of the multiple resolutions considered at the meeting, with 181,296,823 votes in favor.

Oceana’s Senior Vice President Matt Littlejohn said, “Nearly half of the vote spoke up for the oceans, sending a clear message that it’s time for the company to address its contribution to the plastic pollution problem. Amazon’s plastic packaging – as Oceana’s most recent report indicated – grew by nearly 29% in just one year. Sea turtles and other ocean animals often mistake plastic for food, which can ultimately prove fatal. Amazon is a data-driven company and has indicated to Oceana that it already measures its plastic use. It’s time for the company to be transparent about its plastic packaging and commit to quantifiable and time-bound company-wide goals to reduce it.”

Ahead of this year’s meeting, Oceana called on Amazon employees (who are also company shareholders) on the ground at Amazon’s headquarters in Seattle and Arlington, VA to win support for the resolution. The campaign featured photos of ocean animals eating or being covered by ocean plastic along with the headline “AMZN: Less plastic, please.” This effort included canvassers, mobile billboards, 1,000-yard signs, 500 posters, and a LinkedIn campaign. Oceana also sent a letter to Amazon shareholders outlining five reasons to support this resolution and created a dedicated website for the endeavor. 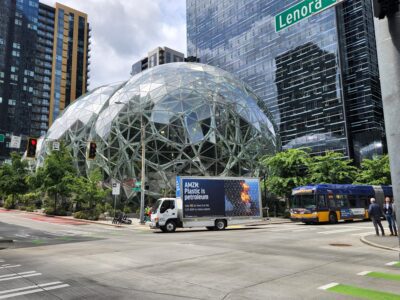 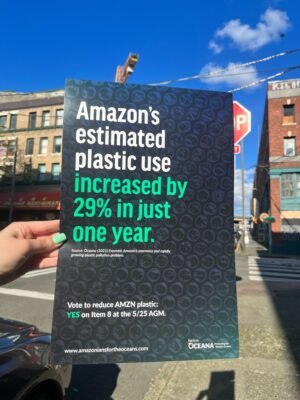 Additionally, Oceana rallied support for the resolution from Signatories to the UN Principles for Responsible Investment (PRI). Many of the institutional investors owning Amazon shares are members of the PRI and have pledged to seek disclosure on Environmental, Social and Governance (ESG) issues by the companies they invest in. Oceana called on these investors to honor their commitment to the PRI and vote in favor of the resolution, which would seek such disclosure on plastic pollution – an immensely important ESG issue. Three of these companies publicly declared their intent to support the resolution.

Providing rationale for voting in favor of the resolution, EFG Asset Management stated, “Concern over the environmental damage caused by plastics is rising and regulations are likely to go into force in a number of jurisdictions that would limit the amount of single-use plastic packaging that can be used. Such additional disclosure as is being requested by the proponent would help shareholders gauge whether the company is appropriately managing risks related to the creation of plastic waste.”

Click here for images of Oceana’s “AMZN: Less plastic, please” campaign in support of the resolution.