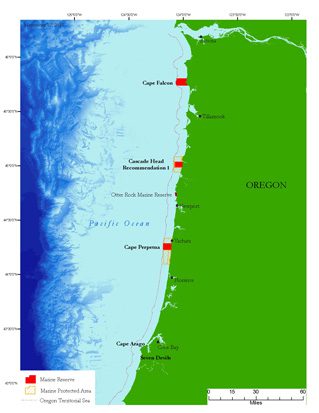 This week marks a critical milestone in Oregon’s ongoing work to create an ecologically significant network of marine protected areas along the state’s coastline. Three coastal community teams (Cape Falcon, Cascade Head, and Cape Perpetua) provided recommendations to the Oregon Department of Fish and Wildlife throughout the week. Oceana has been working with a diverse coalition, called Our Ocean, to help build an ecologically significant network of marine protected areas and marine reserves that protect the health and biodiversity of our Pacific coastal and marine ecosystems.  Over the past eleven months, Oregon’s coastal community teams reviewed and made recommendations in each of these three areas.

“The science is clear, marine reserves protect ocean habitats, biodiversity, and increase fish size and abundance,” said Ben Enticknap, Pacific Project Manager for Oceana.  “The recommendations provided by the community teams are testament of the desire for strong conservation outcomes that protect a diversity of habitats and abundant marine life.”

Each team recommended a marine reserve that meets the minimum size range recommended by the Ocean Policy Advisory Council’s Scientific Technical Advisory Committee (5 to 10 kilometers in length along the coast).  The Cascade Head and Cape Perpetua teams also recommended adjacent marine protected areas, which allow some activities like salmon trolling and crabbing, while prohibiting other activities like bottom trawling, offshore development and commercial fisheries for ecologically important forage fish.

“The coastal community teams have had some hard conversations, but they are doing the right thing for our oceans and communities,” said Whit Sheard, Oceana attorney and senior advisor. “For too long we have failed to protect important ecological areas in our marine environment.”

On Monday, the Cape Perpetua Marine Reserve Community Team recommended a combination of marine protected areas and a marine reserve in the area from Yachats to just south of Heceta Head, north of Florence.

Following the recommendation of these teams, the Oregon Department of Fish and Wildlife will provide a report to the legislature by November 30, 2010, and will make its recommendations to the Governor.  Oregon’s marine reserve process was initiated a decade ago by then Governor Kitzhaber.

Oceana campaigns to protect and restore the world’s oceans. Our teams of marine scientists, economists, lawyers and advocates win specific and concrete policy changes to reduce pollution and to prevent the irreversible collapse of fish populations, marine mammals and other sea life. Global in scope and dedicated to conservation, Oceana has campaigners based in North America, Europe and South and Central America. More than 400,000 members and e-activists in over 150 countries have already joined Oceana. For more information, please visit www.Oceana.org.