Oceana, Environmental Justice Foundation and WWF have welcomed a new regulation announced yesterday governing the European Union’s extensive external fishing fleet, which operates across the globe and is responsible for 28% of the EU’s total fish catches. After almost two years of negotiations, more than 23,000 vessels will need to follow the same sustainability standards, regardless of where they operate.

The new law hammered out between the European Commission, the Parliament and the Council of Fisheries Ministers will:

The previous regulation, in place since 2008, resulted in unfair competition among operators, and prevented EU authorities from ensuring that vessels were fishing legally and sustainably. The new law removes these inconsistencies, and ensures that all vessels are subject to the same rigorous requirements in order to fish outside of EU waters. 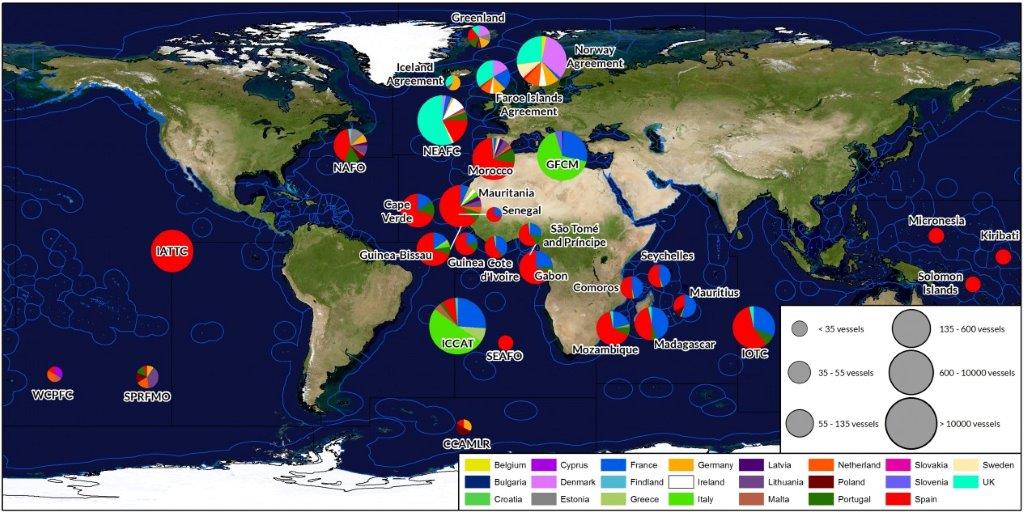 “The new rules are a major step forward for global transparency and the fight against illegal, unreported and unregulated (IUU) fishing. The EU is leading by example and now others must do the same in all corners of the fishing world. Only with greater transparency can we eradicate IUU fishing, rebuild the world’s fisheries, and help the developing countries that depend heavily on this natural resource”, said María José Cornax, Policy and Advocacy director at Oceana in Europe.

“We strongly commend the European Union on these new measures to ensure the sustainability and accountability of its external fishing fleet. By implementing this new Regulation the EU will continue to lead the way in the global fight against illegal fishing. We now look to other countries to take notice and follow suit, putting in place similarly stringent standards for their vessels.  Of great importance will be action to make the data on where these vessels are fishing public for all to see. By doing so, they too will take vital steps to protect the rights of legitimate fishers and safeguard our oceans for the communities that rely on them for their food and livelihoods,” said Steve Trent, EJF Executive Director.

All above-mentioned organisations are part of a coalition of NGOs* pushing for an ambitious reform for the EU external fleet and that welcomed the agreement.

WhoFishesFar.org is a database created by the coalition and its partners, which makes public, for the first time, data on all fishing authorisations since 2008 (except private agreements) when the external fleet regulation was adopted, including data on foreign vessels fishing in EU waters. It shows that, during the period 2008-2015:

For more information go to http://www.whofishesfar.org/files/Fact_sheets/FAR_Fact_sheet.pdf

http://www.whofishesfar.org/case-studies/new-data-on-european-union-external-fishing-fleet-more-transparency-in-world-fisheries www.whofishesfar.org shows that between 2008 and 2015 a total of 19,772 individual EU vessels were authorised to fish in the ICCAT area. Of this 19,772, almost half (9,988) were Italian-flagged vessels. In March 2016, the Italian government adjusted the number of Italian vessels targeting swordfish in the ICCAT area, bringing it down from over 8,400 vessels in 2015 to 849 vessels. The review of the external fleet Regulation provides member states with a crucial opportunity to ensure that vessels authorised to fish in Regional Fisheries Management Organisations areas are actually active or operating in these areas. Accurate information on where vessels are fishing and which species they are targeting is vital to ensuring transparency and accountability in global fisheries, and the sustainable management of fish stocks.