Final regulations protecting almost 200,000 square miles of U.S. Arctic waters from industrial fishing were released today and will be effective starting December 3, 2009.  The new regulations close all U.S. waters north of Alaska’s Bering Strait to commercial fishing to allow time for more science to assess the health of Arctic ocean ecosystems and the potential impacts of large-scale fishing given the impacts the Arctic is already facing from climate change and ocean acidification.  The regulations do not affect subsistence fishing, and are in fact designed to help protect Arctic ocean ecosystems central to subsistence.  Conservationists hailed the regulations and called for a similar approach for other industries and in other nations.

“This is ‘doing it right’ in the Arctic—there is a desperate need for more science to be done before we add any more stress to an area already feeling the heat of climate change,” said Dr. Chris Krenz, Arctic Project Manager for Oceana.  “We need a rush of scientists into the Arctic, not an armada of cargo ships, oil platforms and fishing trawlers.”

The same U.S. Arctic waters protected from fishing are squarely in the crosshairs of the oil industry.  Last month the Minerals Management Service (MMS) approved a plan for drilling in the Beaufort Sea next summer, and a similar plan for the Chukchi Sea is currently under review with a decision expected this month.  Conservationists, scientists, local communities and others have called for a science-based precautionary approach for oil that is now in place for fishing, especially given the higher risks of oil spills in the Arctic and the inability to contain, control or clean up an accident in the icy waters of the Arctic.

The Arctic is home to thousands of people who rely on ocean ecosystems as central to a subsistence way of life practiced for generations.  Climate change and ocean acidification are already placing stress on those ecosystems, and adding additional pressures from fishing or oil and gas activities could push them past the brink.  Arctic communities showed strong support for the Arctic fishing protections and have expressed concern that activities from oil and gas, including seismic testing and the risk of oil spills, could adversely impact bowhead whales and other animals that are vital sources of food for local peoples.

President Obama’s Interagency Ocean Policy Task Force is likely to recommend addressing the changing Arctic conditions as a national priority and using an ecosystem based management approach to protect, maintain and restore the health of the nation’s marine ecosystems.  The Arctic Fishery Management Plan exemplifies this approach.

“MMS has given the green light to drill in the U.S. Arctic Ocean next July using the same inadequate and out of date science that led fisheries managers to close the region to commercial fishing,” said Krenz.  “One of the reasons Americans elected President Obama is because they believe in sustainable development based on sound science and demonstrated response capabilities.  MMS and Shell continue on an unrelenting course that MMS records indicate are likely to bring a major spill and calamity to the Arctic.”

The U.S. State Department is in discussions with other Arctic nations to expand these same fishing protections across international boundaries.  These Arctic fishing regulations set a worldwide precedent of putting management in place before commercial fishing occurs. 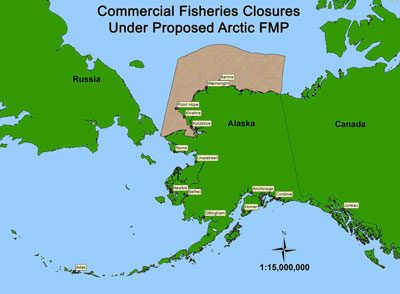