What is Seafood Fraud? - Oceana Skip to content
LnRiLWhlYWRpbmcuaGFzLWJhY2tncm91bmR7cGFkZGluZzowfQ==
LnRiLWNvbnRhaW5lciAudGItY29udGFpbmVyLWlubmVye3dpZHRoOjEwMCU7bWFyZ2luOjAgYXV0b30gLndwLWJsb2NrLXRvb2xzZXQtYmxvY2tzLWNvbnRhaW5lci50Yi1jb250YWluZXJbZGF0YS10b29sc2V0LWJsb2Nrcy1jb250YWluZXI9ImM2MmRlZTUyMWE4Y2M1ZWI4MDRkNjAwODViMjc5MjQ3Il0geyBwYWRkaW5nOiAwO21hcmdpbjogMDsgfSAudGItaGVhZGluZ1tkYXRhLXRvb2xzZXQtYmxvY2tzLWhlYWRpbmc9ImFhMGUzNGM0MjFiNmNhOWNhM2FlMWMwZTNlMzYwYjVkIl0gIHsgZm9udC1zaXplOiAzMnB4O3RleHQtYWxpZ246IGNlbnRlcjsgfSAgQG1lZGlhIG9ubHkgc2NyZWVuIGFuZCAobWF4LXdpZHRoOiA3ODFweCkgeyAudGItY29udGFpbmVyIC50Yi1jb250YWluZXItaW5uZXJ7d2lkdGg6MTAwJTttYXJnaW46MCBhdXRvfSAgfSBAbWVkaWEgb25seSBzY3JlZW4gYW5kIChtYXgtd2lkdGg6IDU5OXB4KSB7IC50Yi1jb250YWluZXIgLnRiLWNvbnRhaW5lci1pbm5lcnt3aWR0aDoxMDAlO21hcmdpbjowIGF1dG99ICB9IA==

What is Seafood Fraud? 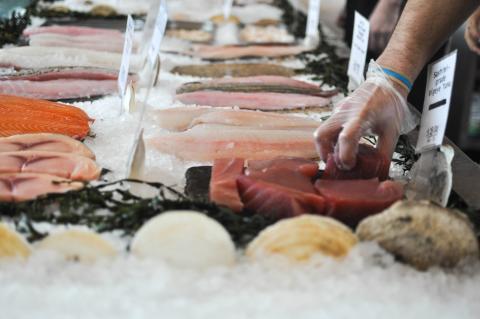 Seafood fraud is the practice of misleading consumers about their seafood in order to increase profits. Along with ripping off shoppers, these actions can have negative impacts on marine conservation efforts and human health.

Types of seafood fraud include substituting one species for another without changing the label, including less seafood in the package than is indicated on the label, adding too much ice to seafood in order to increase the weight and shipping seafood products through different countries in order to avoid duties and tariffs.

Although seafood is one of the most popular foods in the United States, consumers are routinely given little or no information about where their seafood is from. Plus, the information provided on seafood labels is often misleading or fraudulent.

Overfishing continues to plague the world’s oceans, with more than three-quarters of fish stocks worldwide fully or overexploited. Partly in response to a decline in U.S. fisheries, 84 percent of the seafood eaten in the U.S. is imported, and it follows an increasingly complex path from a fishing boat to our plates. Despite the fact that most seafood consumed in the U.S. is imported, only two percent is currently inspected by the FDA.

Despite growing concern about where our food comes from, consumers are frequently served the wrong fish – a completely different species than the one they paid for.

Recent studies have found that seafood may be mislabeled as often as 25 to 70 percent of the time for fish like red snapper, wild salmon, and Atlantic cod, disguising species that are less desirable, cheaper or more readily available.

With about 1,700 different species of seafood from all over the world now available for sale in the U.S., it is unrealistic to expect the American consumer to be able to independently and accurately determine what fish is really being served. In the U.S., the consumer price index for seafood has risen more than 27 percent over the past ten years remaining steadily higher than other foods and creating significant economic incentives for fraud and illegal fishing.

In order to prevent fraud, consumers need to know where seafood comes from and be able to trace it all the way back to the sea.