Panaon Island in the Philippines is home to pristine corals. We must protect them while we still have the chance.

It’s hard to talk about coral reefs without also talking about climate change. Australia’s Great Barrier Reef lost half of its corals to warming waters in less than three decades, and if current trends continue, children born today may live to witness the extinction of these iconic animals.

Fortunately, it’s not too late to prevent this doomsday scenario from coming true. While sweeping international action is needed to reduce the carbon emissions that lay waste to reefs, scientists are simultaneously focused on helping corals cope in hotter, more acidic waters. One strategy is to prioritize healthy reefs before irreparable damage has been done.

By intervening early and protecting vibrant reefs from other threats – like overfishing and pollution – we can foster resilience in corals. In some cases, carefully designed marine protected areas (MPAs) can help corals evolve to withstand higher temperatures over time, according to research led by Dr. Timothy Walsworth at the University of Washington and co-authored by Oceana Science Advisor Dr. Malin Pinsky.

Given the rapid acceleration of ocean warming, the corals surrounding Panaon Island in the Philippines are strong contenders for national-level protections. Oceana went on a 22-day expedition to Panaon in fall 2020 and discovered that more than half of the coral reefs surrounding the island are in good or excellent condition, with some areas enjoying at least 70% coral cover. This was a welcome surprise, considering that the country’s reefs have been steadily declining over the last 40 years. The overwhelming majority – around 95% – are classified as at risk.

“It was an eye opener for our experienced divers that there are still areas in the Philippines worth protecting,” said marine scientist Marianne Saniano, who led Oceana’s Panaon expedition. “After every dive that they did, the scientists would always say, ‘It gets better and better.’”

Thanks to support from Bloomberg Philanthropies and Sobrato Philanthropies, Oceana is campaigning for the creation of an MPA in Panaon. MPAs have been proven to improve the health of coral reefs by increasing coral cover and diversity, as well as fish diversity, abundance, and biomass. This would not only be good news for coral reefs, but also the thriving ecosystems they support. 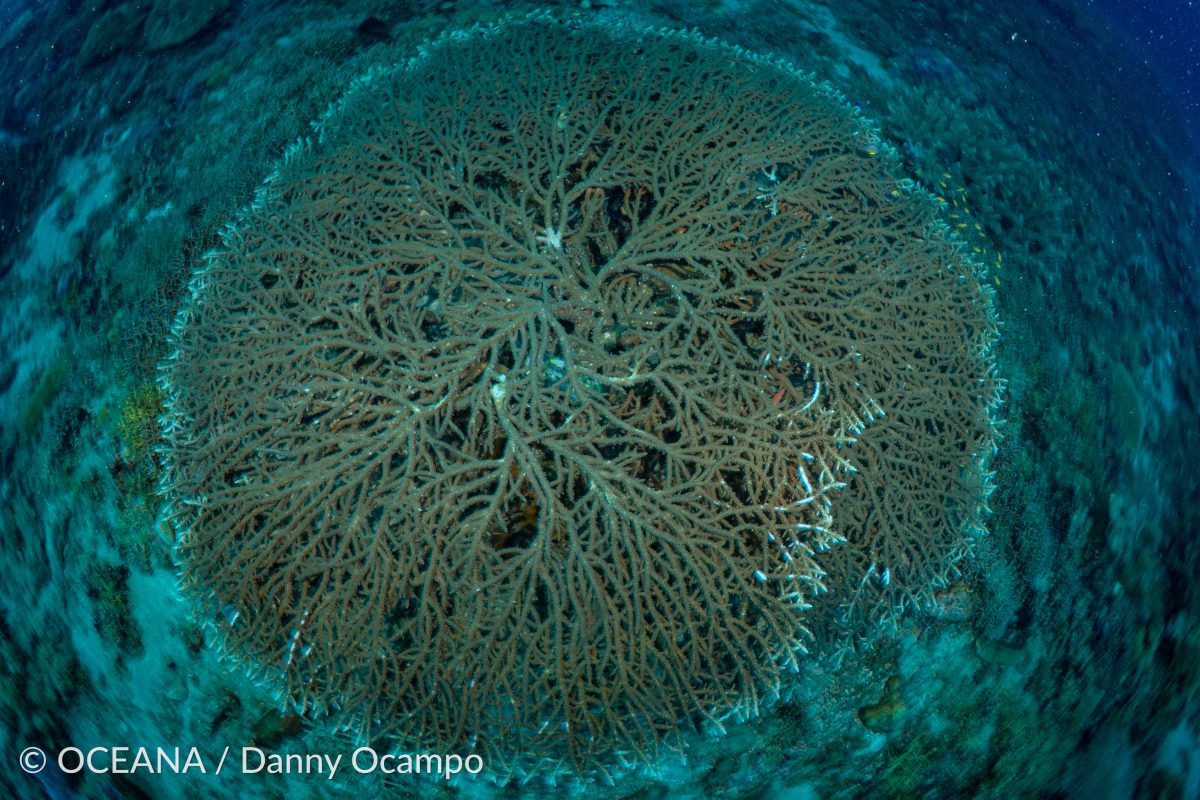 Located in Southern Leyte province and home to 56,000 people, Panaon Island forms part of the “Coral Triangle,” an area of high biodiversity that sprawls across multiple countries in the western Pacific Ocean. More than 250 species of hard coral and plenty of soft corals have been documented in this area, each seemingly competing for the attention of underwater photographers.

In one spot, you may see delicate sea fans, swathed in varying shades of yellow, orange, and pink. In another, you may come across table corals stretching five meters (or 16 feet) across, their umbrellas sheltering marine life in need of some shade.

There are fungi-like foliose corals, magenta-colored soft corals, and massive branching corals resembling the roots of an ancient tree. The fact that these corals are in mint condition is a sign that Panaon has not been heavily impacted by human activity, according to Yvette Lee, an award-winning photographer who has dived all over Asia.

“Panaon is a gem. It’s a 20-carat emerald,” said Lee, who was part of the Panaon expedition’s documentary team. “Only in rarely dived places can you see sea fans growing out of the sandy floor. Usually, you see them on walls or steep slopes. In Panaon, you see them a lot, which is an indication that it is a relatively untouched place where pristine reefs thrive.”

Unfortunately, in addition to sea fans, Oceana’s team also found plastic wrapped around corals. Sea turtles are among the many vulnerable species in Panaon that could ingest or become entangled in plastics. Because sea turtles are unable to easily regurgitate foreign objects, swallowing a piece of plastic can be a slow death sentence if it prevents a turtle from eating or digesting food. Though marine pollution in Panaon is less prevalent than in other parts of the Philippines, it serves as a stark reminder that even seemingly pristine and remote habitats cannot escape the scourge of plastics.

Throughout the Philippines, Oceana is campaigning to ban single-use plastics – a measure that would not only benefit Panaon, but also countless other marine habitats across the country. Nearly 50 local governments – including two out of four municipalities in Panaon – passed resolutions urging the National Solid Waste Management Commission to classify single-use plastics as a non-environmentally acceptable product.

Oceana is leveraging this grassroots support to get the national government to implement a single-use plastic ban that would protect coastal waters across this country of more than 7,600 islands. 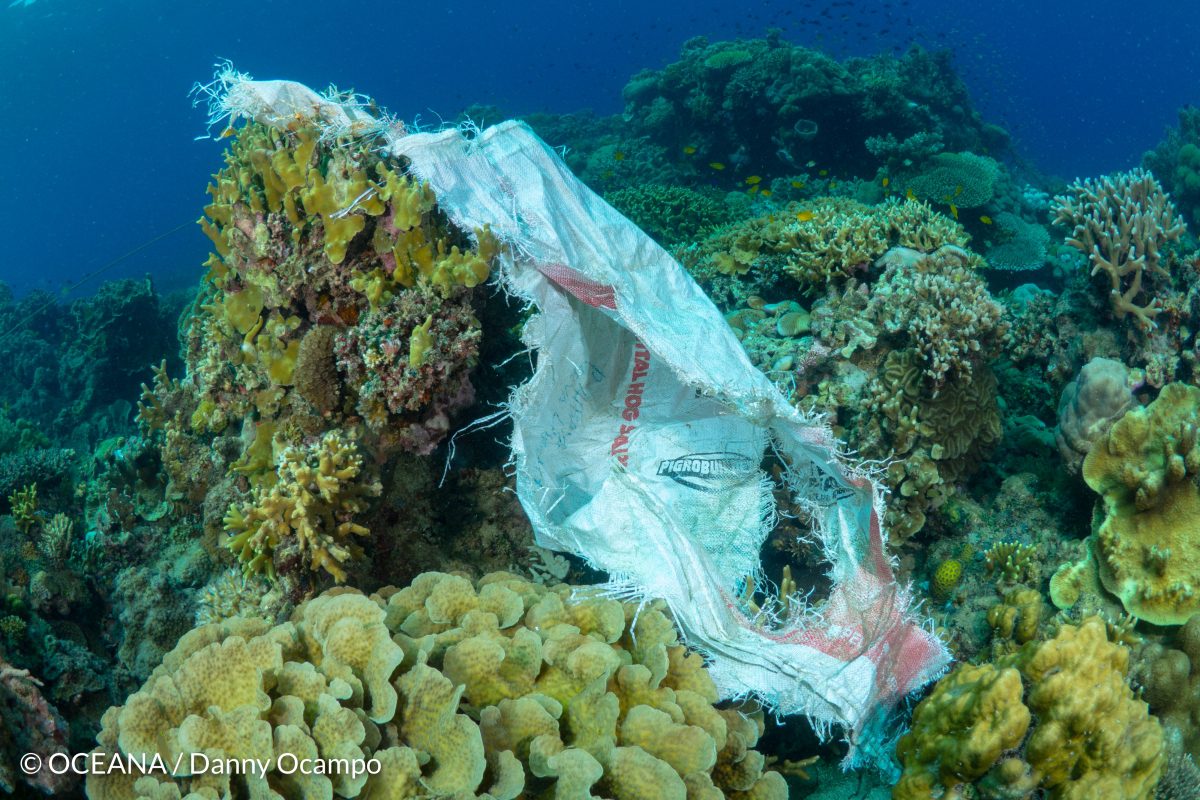 Oceana’s plastics campaign is making headway, but the future of Panaon’s robust corals is not yet assured. First, the island is an up-and-coming tourist destination, and visitors could place undue strain on reefs that are already vulnerable to warming waters. Second, illegal and destructive fishing are widespread problems in the Philippines. Some fishers use dynamite and cyanide to catch fish. Others drag bottom trawls that bulldoze the seafloor. Corals, many of which are fragile, can take decades or longer to recover from destructive fishing.

If Panaon is not protected, these harmful activities could make their way to this coral-rich paradise. Community leaders in Panaon have already established 18 local MPAs that help shield the area. Oceana and its allies are now campaigning to unite these areas and create one large, nationally designated MPA. Doing so would give Panaon stronger protections, as well as increased funding to support management of the area.

Across the Philippines, Oceana is campaigning to stop illegal commercial fishing in municipal waters. In 2017, Oceana successfully advocated for vessel monitoring in the Tañon Strait – one of the largest MPAs in the country – in an effort to identify and stop illegal fishers. This area is home to more than 60% of the country’s coral species and more than half of its whale and dolphin species, but these marine animals are threatened by illegal commercial fishing, pollution, and coastal development projects.

Enforcement is central to any MPA, and fisheries management plays a supporting role in protecting areas where some degree of fishing is permitted. Another victory for the Philippines came in 2019, when the country created Fisheries Management Areas (FMAs) that are science-based, participatory, and transparent. FMA 8, which includes part of the proposed Panaon MPA, was the first management body convened in the country. As such, it will play a key role in any decisions regarding the management of Panaon Island.

“Oceana supports FMA 8, which is one of the most advanced fisheries management bodies in the country,” said Rhea Yray-Frossard, Oceana’s fisheries management officer and coordinator in the Philippines. “Since their creation in 2019, FMAs have been the umbrella that many of our campaigns in the Philippines have fallen under. They direct all coastal local government units and key fisheries stakeholders to assume responsibility for the conservation and sustainable management of shared fishery resources.” 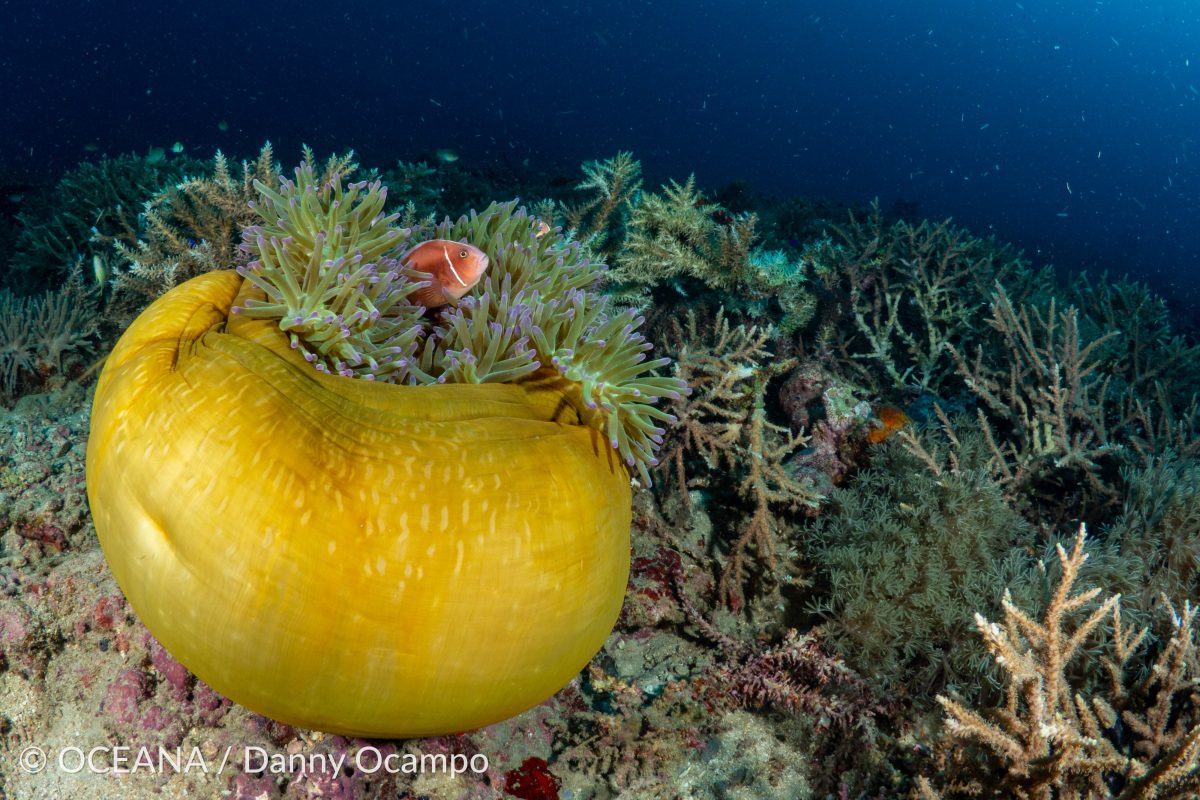 In addition to supporting FMA 8, Oceana has been partnering with government agencies at both the local and national level, as well as two marine conservation groups: the Large Marine Vertebrate Research Institute and Coral Cay Conservation. Oceana is working with key decision-makers and partners to protect Panaon Island under the Expanded National Integrated Protected Areas System (ENIPAS) Act.

A national MPA can be created in one of two ways: Congress can pass a law, or the president can sign a proclamation. Oceana previously supported President Rodrigo Duterte’s decision to establish the Philippine Rise Marine Resource Reserve in 2018. This reserve includes strict protections for Benham Bank, an area with diverse species and 100% coral cover in some areas.

Saniano said another motivation for protecting Panaon – aside from its vibrant corals – is that it’s an overlooked area with a vulnerable population. Creating an MPA could provide benefits to locals, such as sustainable ecotourism jobs that would depend on healthy coral reefs.

“Southern Leyte is one of the poorest provinces in the Philippines, and they’re the ones that are almost always hit by strong typhoons,” Saniano said. “As a campaign manager, I’m always looking for the areas that have less help. And as a Filipino citizen, I want other parts of the Philippines – the ones that are not given enough attention – to be protected, too.”

In the coming months, Oceana will release its scientific findings from the expedition, as well as a documentary highlighting the many reasons that Panaon is a special place worth protecting. In the meantime, Oceana will continue campaigning for policies that protect Panaon – and countless places like it across the country – from single-use plastics and illegal fishing.