Award-winning actor and longtime Oceana supporter Sam Waterston assumed his new leadership role as Board Chair in September, succeeding Valarie Van Cleave. As an advocate and spokesman for Oceana’s campaigns, he has testified before national legislatures on the prevention of shark finning and expansion of offshore drilling.

Hailing from the “Bay State” of Massachusetts, Waterston learned early on why marine resources must be protected for future generations to enjoy.

“I’ve seen firsthand the damage fisheries mismanagement has done to the life of seaside towns and the healing power of Oceana’s science-based, results-oriented campaigns for an abundant ocean,” he said. “And I’ve seen the impact of unbridled plastic production and pollution, and the North Atlantic on the brink of losing all its right whales forever.

“With much to do, and time of the essence, I know Oceana gets things done for our oceans. It always has. I’m honored to accept the position of Board Chair and look forward to restoring our oceans’ abundance.”

Here’s what he said to say about cod, climate change, and more in a recent conversation with Oceana.

Having grown up in New England, how have your views on fisheries management and ocean abundance changed since the region’s famed cod fishery collapsed in the ‘90s?

SW: That event upended the way I thought about the oceans. Cod fish had been drawing Europeans to the Northeast Atlantic going all the way back to when the Vikings first got to Greenland. New England’s most famous and favored cape was named for them. Alexandre Dumas wrote in the 19th century that if every cod egg reached maturity, you could walk across the Atlantic on their backs. In Rhode Island, growing up, seafood was plentiful, full of variety, and inexpensive. Everyone believed the sea was inexhaustible. Suddenly it wasn’t!

SW: We don’t think of their grandeur and magnificence the same way we used to, before we had the technology and weaponry to find and kill whales anywhere, before we had ships big enough to run them over, and fishing gear where they live and breed to entangle, wound, exhaust, and starve them. Whales, the Leviathans of the Bible, could once impress us. They aren’t less splendid just because we now know how to kill them efficiently. Whales haven’t been diminished; they are what they were, magnificent creatures, but our capacity for wonder has been shrinking. And, if people make whales extinct, we’ll have exposed something awful about ourselves, to ourselves. Less than 400 is a dangerously small number. Now’s the time to save the North Atlantic right whale.

A decade ago, testifying before a Senate subcommittee, you spoke about ocean acidification and said, “There is no debate that carbon dioxide is changing our oceans.” Unfortunately, since then, little has improved. What would you like to see happen with regard to climate change action?

SW: What needs to happen is plain and simple: We, all of us, everywhere, need to burn less fossil fuels and greatly increase renewable sources of energy – not all at once, but starting right now, we need to get to a carbon neutral economy as fast as we can. We’ll all benefit. Higher ocean acidity and higher ocean temperatures are bad news for all of us, and the devil behind them is the wasteful consumption of fossil fuels.

How did you and so many of your Grace and Frankie co-stars – including Jane Fonda, Lily Tomlin, June Diane Raphael, and Brooklyn Decker – end up protesting climate change (and, for all except Decker, getting arrested) at Fonda’s Fire Drill Fridays in late 2019 and early 2020?

SW: 1) Jane Fonda is irresistible, 2) We were already alarmed, and 3) Fire Drill Fridays gave us something immediate to DO about it. In other words, Jane invited us, and we went. I’d never been arrested before. Getting arrested was new to me. It turns out, in addition to whatever attention it may get, or minds it may change, getting arrested is a wonderful way to get the message through to yourself about how deep are your own convictions. 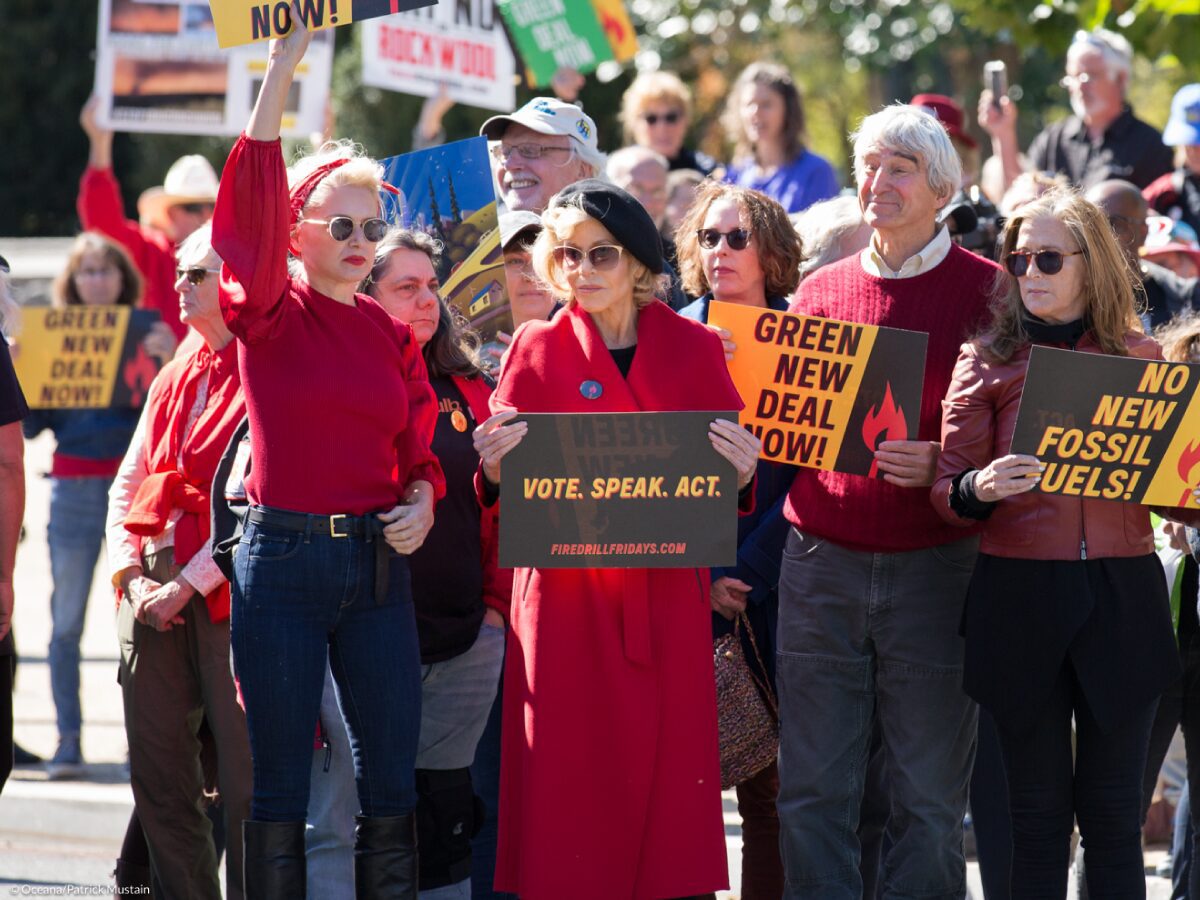 Another consequence of the fossil fuel industry is, of course, plastic. To what extent do companies have a responsibility to reduce plastic pollution?

SW: There’s no other way around this: We, as a civilization, have to produce less plastic, because, once it’s made, it’s basically here for good. The particles get smaller – that’s all. At the same time as we drink, eat, and breathe the tiny particles of it, we’re drowning in ‘big’ plastic. A garbage truck full of plastic goes into the ocean every minute. Plastic manufacturing has generated 10 times more plastic refuse than recycling removes on its best day.

You have supported Oceana for over a decade. What has been your most memorable experience?

SW: The most memorable experience was my first experience: the first time meeting the board and staff of Oceana, led by Andy Sharpless – people generously devoting their time and treasure to fighting what looked like impossible odds, but who were already churning out victory after victory for the fish, against pollution, waste, mismanagement, and theft, receiving instruction from the likes of Dr. Daniel Pauly, Dr. Mike Hirshfield, Jackie Savitz, and Oceana’s country leaders, and seeing with my own eyes for the first time the impossible things they were doing, making the discovery that a community already was in place and DOING SOMETHING about what had alarmed me long before but that I didn’t see how I could do anything to address, a community I could join and help fight against the pell-mell hammering down of what should be, can be, if only we will take care of it, an inexhaustible supplier of healthy meals for a billion people in the world forever, and of natural wonder upon wonder.

What are you most looking forward to doing as Oceana’s new Board Chair?

SW: Oceana is working very well: It’s run and led by terrific people, people I know I can depend on for help. It’s a fascinating place, and I know I’m going to learn a lot. I’m already enjoying my new job! As expected, it’s a good feeling to do more, even if it’s only a little more. My plan is to stay out of the way of how well Oceana’s working already. “First, do no harm.” If I am helpful here and there, too, I’ll call that magnificent success.