The Transparent Oceans Initiative (TOI) produces and disseminates evidence-based research that documents the activities—and the consequences—of the nations engaged in fishing on the high seas and the distant waters of other countries, so called distant-water fishing (DWF).

TOI’s work tracks developing policy issues to ensure that our research is timely and useful, and able to seize the moment to advance reforms. TOI research and outreach emphasize:

Ultimately, the Transparent Oceans Initiative aims to protect the ocean, improve the rule of law, and increase equity by taking away the social license of distant-water fishing fleets to operate with impunity.

Fish crimes in the global oceans

Fishing-related crime is highly concentrated and sanctions are often inadequate, according to an Oceana supported study led by Dyhia Belhabib of Ecotrust Canada and Nautical Crime Investigation Services. For the first time, the links between illegal fishing and other maritime crimes like forced labor, drug trafficking, and money laundering have been analyzed from a database housing over 20 years of reported fishing-related offenses from around the world.

Eleven percent of incidents involved labor and human rights violations, almost all committed by industrial fishers. At least one-third of all recorded offenses are associated with just 20 companies and 450 industrial fishing vessels out of 6,053 listed in the database.  Five of these offenders are among the top 10 companies in the world fishing in the high seas and at least 59% of offenses come from Chinese-owned vessels.

Roughly half of all illegal fishing incidents involved fishing without a permit and are mostly committed by artisanal fishers, who are disproportionately criminalized by law enforcement. Greed is rarely the main driver of illegal practices in this sector. More contributory drivers in the artisanal sector include poverty and displacement from traditional fishing grounds by industrial vessels.  Evidence suggests fishing offenses in the artisanal sector would be better handled by adopting more cooperative approaches to fisheries management and law enforcement, while harsher penalties would better help eliminate industrial fishing sector offences. 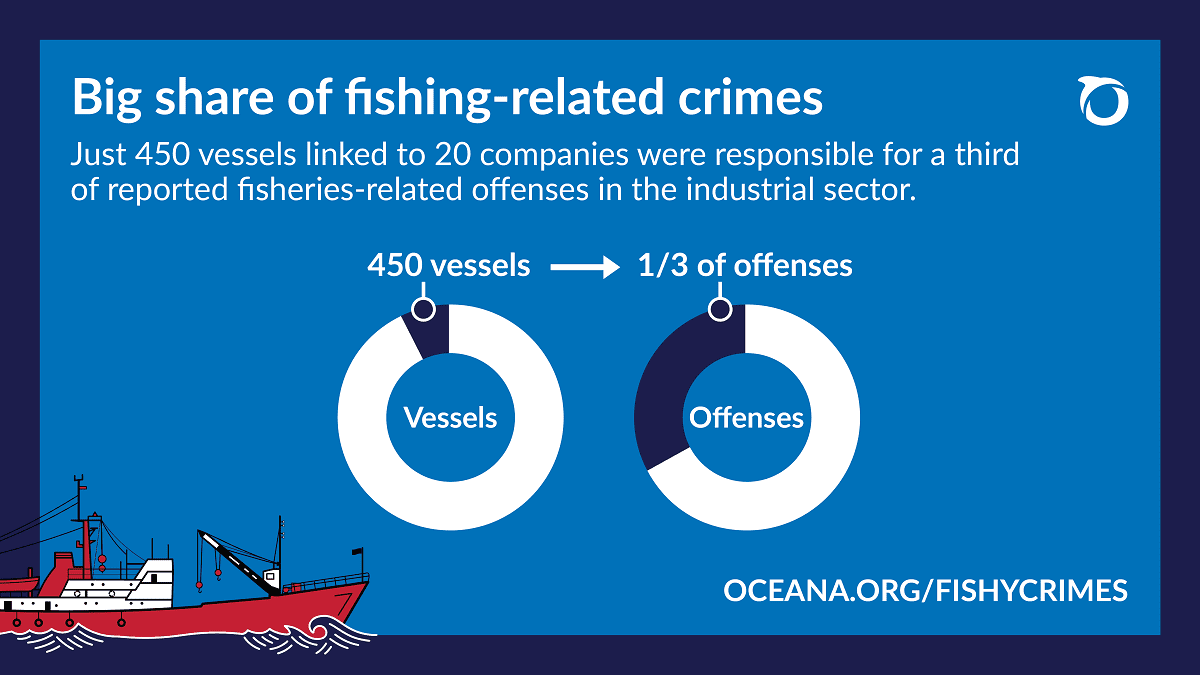 For years we have known that governments subsidize fishing by their own fleets in the waters of other nations. But we did not know exactly where those dollars were destined, making it hard to determine a cumulative footprint for foreign subsidy spending in coastal state waters.

Now, researchers have mapped these subsidy flows for the first time. The top 10 providers of harmful fisheries subsidies spent more than $5.3 billion on fishing in the waters of 116 other nations. That is more than one-third of their total harmful fisheries subsidy spending, according to a study authored by Daniel Skerritt and U. Rashid Sumaila of the University of British Columbia and supported by Oceana. In the waters of several least developed countries (LDCs), the catches made, and estimated subsidies received, by foreign fleets surpass those of the domestic fleet. 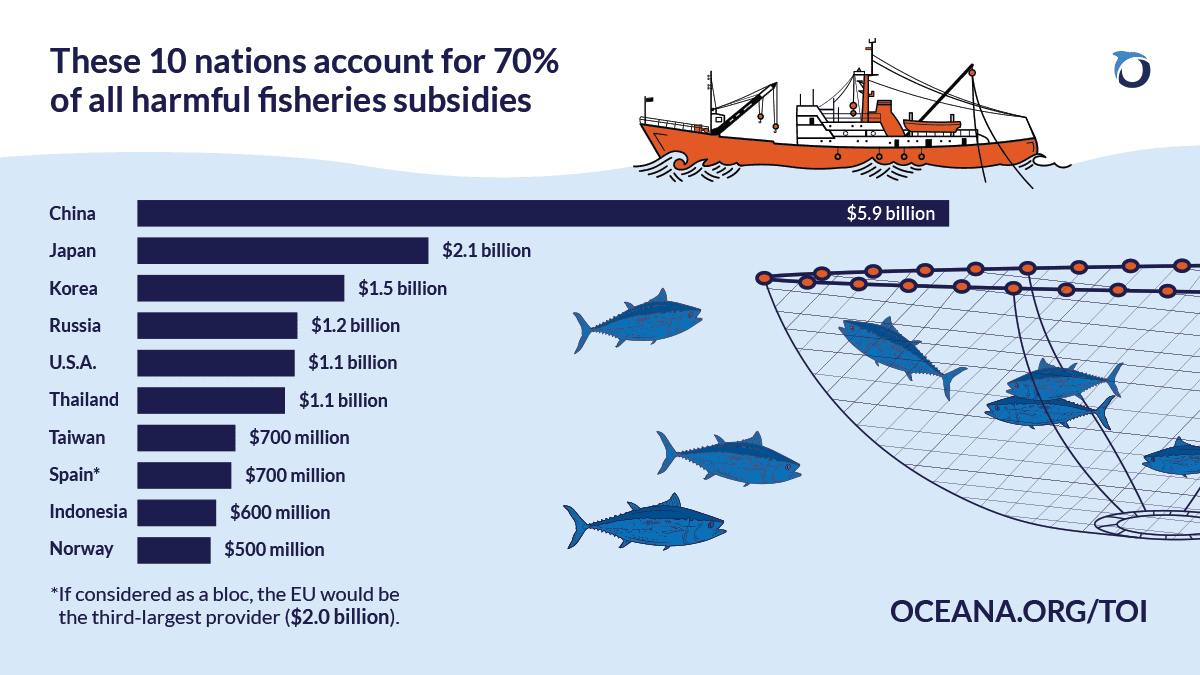 Many governments pay subsidies to the fishing industry to support economic activity, employment, and the food supply. But such subsidies can lead to unsustainable fishing by incentivizing harvest that would not be profitable in the absence of government support. In its 13th five-year plan for 2016–2020, the Chinese government acknowledged the need to reduce the environmental impact of fishing.

A new analysis of China’s fisheries subsidies reveals decreasing transparency in reporting and continued heavy subsidization of their distant water fleet, but also documents a drop in domestic subsidy spending. The study, which was led by Tabitha Grace Mallory, Chen Hao, and Leng Danyan of the China Ocean Institute and the University of Washington will be submitted for publication in the peer-reviewed literature by the close of 2021. 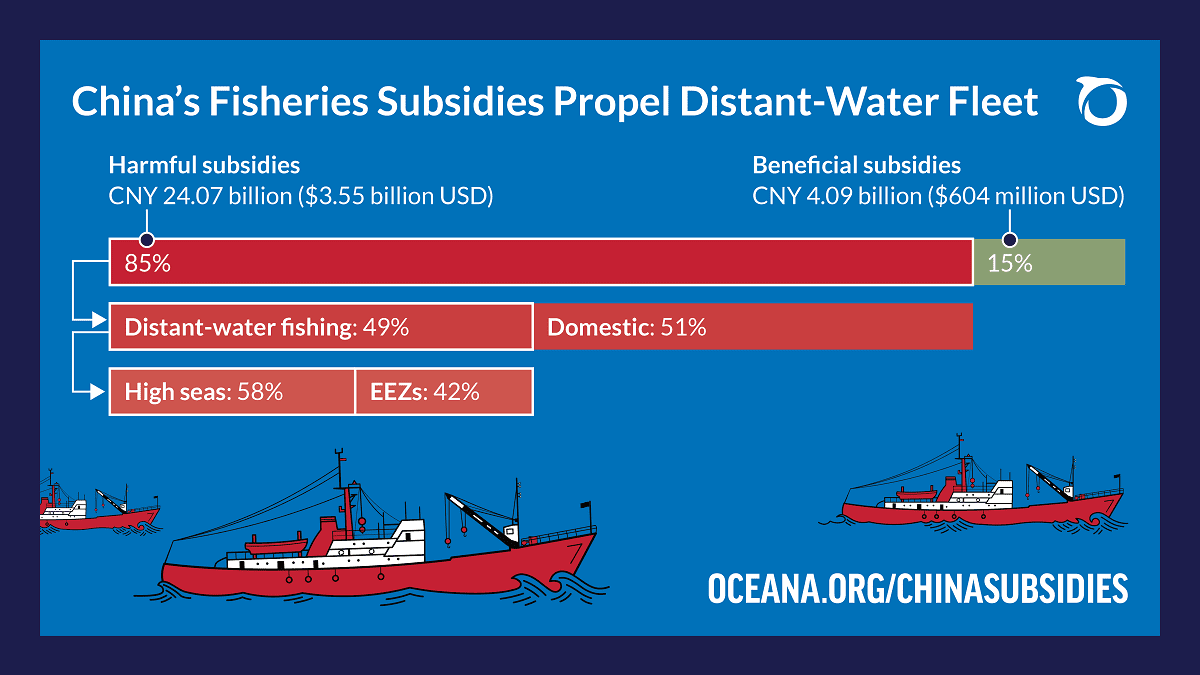 How Oceana used Global Fishing Watch to promote transparency in 2018

Transparency can save the oceans